Hummingbirds – tiny yet mighty, and amazing food guzzling machines! Hummingbirds are exotic birds with an impressive ability to not only fly long distances – but also hover, too!

The hummingbird has fascinated mankind for a long, long time – and lucky for you, we’re here with stacks of facts about this curious critter to help you get better acquainted. Let’s dive in!

1. Some hummingbirds fly for miles and miles.

The Rufous hummingbird wins the title for taking the longest migratory flight of any bird worldwide. It travels a distance of approximately 3,900 miles each way!

2. Hummingbirds can be found all over the Americas.

Many hummingbird species are found in California, Mexico, Central America and the Caribbean.

3. The smallest hummingbird is truly tiny!

The bee hummingbird measures up to approximately two inches and weighs only 0.07 oz.! 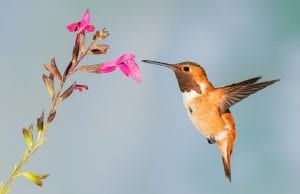 Hummingbirds have an astounding ability to hover. This is pretty strenuous exercise for them! The human ear can even pick up the sounds they make – they normally buzz or hum while hovering.

6. How often do hummingbirds beat their wings?

The smallest of hummingbirds beats its wings up to 80 beats per second to keep hovering. Meanwhile, its larger cousins beat their wings up to 12 times per second. It really does vary!

7. What on Earth is torpor?

When food is scarce, hummingbirds enter a state known as torpor, which is similar to hibernation. This allows them to keep on surviving until conditions improve! During this time, their metabolisms slow down – meaning they pretty much enter ‘essential organ’ mode!

Studies have shown hummingbirds can convert sugar into energy within 30 to 45 minutes. This useful to enable them to hover for long periods of time during the day.

9. The hummingbird has the power to back up.

Believe it or not, the hummingbird is the only known avian to be able to fly in reverse – incredible stuff if you see it in action! 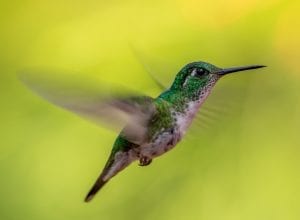 10. Hummingbirds can get used to people.

Hummingbirds have the odd ability to actually remember humans – for example, they will let their keepers know if they are low on food or water!

11. They can get up close and personal.

Bizarrely, you may well find that a hummingbird flies up close to your face – that’s not aggression, or even anything strange – it’s pure curiosity. As mentioned above, they can learn that people will feed them – meaning they may expect the same from you.

The hummingbird normally won’t eat much during the day. They tend to eat at the start of the morning and at the end of dusk. 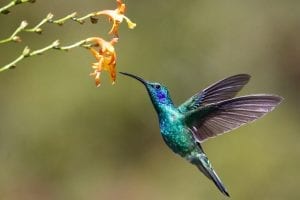 While hummingbirds can get used to human feeders, they naturally try and keep various food channels open at any one time. That means if you don’t feed them, they will find other avenues for sustenance.

14. They have something odd in common with bats.

Hummingbirds tend to have strange sleeping habits, too. On occasion, during their torpor states, hummingbirds are known to hang upside down! Believe it or not, some people assume that these upside-down birds have actually died – when they are really just waiting for food to come along!

15. After torpor, the gorge begins.

Once a hummingbird leaves its torpor state, it’s likely to gorge itself – it can consume up to a quarter of its daily intake of food just to keep itself up and running! 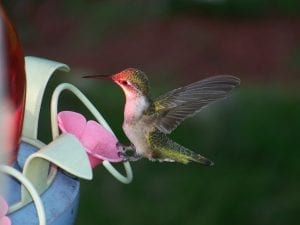 What makes the coloring of hummingbird feathers so dramatic?

Researchers have discovered that the more protein hummingbirds consume, the more colorful their feathers become!

How fast can a hummingbird dive?

Hummingbirds can reach speeds up to 51 miles per hour (83 kilometers per hour) in a 100 feet dive (30 meters)! This is a typical dive speed and length as part of the male birds’ mating rituals!

Are there any hummingbirds that live outside of America?

No - you’ll never find a hummingbird in the wild outside of the Americas - weirdly enough, they’ve never hovered much further!

Do you know any fun facts about hummingbirds? Share them in the comments below!