The phrase ‘ice age’ probably makes you think of all kinds of ancient critters – if not, a certain series of movies that came out a few years ago! However, what little we do actually know about animals during the ice age is seriously fascinating. So, sit back and let us take you through some fun facts about ice age animals that might just surprise you.

The last ice age occurred between 19,000 and 23,000 years ago. As you can imagine, that means any animals around during that period are, sadly, long gone. The most recent ice age was known as the ‘Pleistocene’ era.

2. There were some big beasts around during this time.

The last ice age was known for playing host to grandiose creatures known as megafauna! To be described as a megafauna, an animal needed to weigh more than 99 pounds or 45 kilos.

3. Bears have changed quite a bit over the years.

Bears have remained almost the same shape though facially the size of their heads have become relatively smaller in relation to their body size. In terms of overall size, polar bears and grizzly bears are also considerably smaller than their megafauna equivalents! 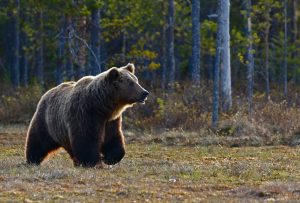 Ice age animals such as the predecessors to sloths, tapirs, tortoises and hippos all carried similar traits to the animals we see on the planet nowadays. In fact, it’s believed that elephants didn’t change all that much – woolly mammoths, of course, were covered in fur, and that’s about it!

5. Mexico is said to be the ice age animal capital of the west.

The largest number of ice age mammal bones have been in Mexico. 200 skeletons were found in the area of Mexico City Airport alone!

6. The steppe bison was pretty prolific.

More fossils of the steppe bison have been found than any other megafauna species so far. Migrating from Asia to North America, these grass eaters lived in large groups.

On July 28th, 2020, it was reported that the remains of an adult woolly mammoth had been found in a shallow Siberian lake. Having lived approximately 10,000 years ago, the body was remarkably well preserved!

8. These were some massive grizzlies.

Grizzly bears have evolved from the giant short-faced bear – a truly huge beast that was said to have lived in America for around a million years straight. They had amazingly powerful jaws – to crush as well as to eat with!

9. It wasn’t all about the mammoths!

Woolly mammoths actually only accounted for around 5% of animals we know of from the last ice age. However, they make up around a third of the bulk! 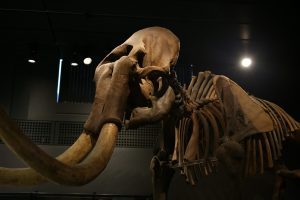 10. Ancient sloths – or bears? Time to make your mind up…

Jefferson’s ground sloths weren’t really sloth-like – they were more like big, lumbering bears! They measured up to three meters in length – truly massive!

The giant beaver was – of course – a rodent of impressive size. It was said to weigh up to 100kg – amazing that it didn’t live on.

The stocky yet powerful scimitar cat was an ancient beast that weighed around 200kg – one of the most fearsome beasts around in the last ice age.

13. Not all creatures died out in the freeze.

There are several animals that survived the ice age, effectively, and we still see them roaming the planet to this day. Believe it or not, these include critters as diverse as the wolf and the walrus! 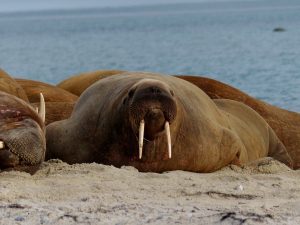 Believe it or not, walruses survived the ice age.

14. Horses thrived in America for many years.

The Yukon horse is thought to be one of the oldest horse species on record – and it lived for millions of years in North America.

What killed so many ice age animals?

Much like the dinosaurs, many ice age species died as a result of an asteroid striking the Earth - according to intensive research, this may have led to planet cooling that could have caused mass extinction.

What came first - the dinosaurs or the ice age?

The last ice age occurred after the reign of the dinosaurs, no matter what a certain movie might tell you!

Are we in an ice age now?

Technically, yes - providing there’s ice, we are in an ice age!

Do you know any fun facts about ice age animals? Share them in the comments below!