Ice cream is a delicious treat that appeals to sweet teeth all over the world. It is perhaps one of the best-loved man-made culinary staples on the planet – and it comes in many different varieties!

It may not be the healthiest treat to enjoy regularly, but it has a fascinating history, and we’d wager that there are plenty of interesting facts about ice cream which are likely to surprise you. Grab a spoon and tuck into our sweet fact file about this dessert staple..

Believe it or not, around half the ice cream you eat is pure air. That’s what helps to keep it so light and creamy – otherwise, it’d be super-dense and difficult to enjoy.

2. Ice cream has been around since the Roman Empire.

The Romans were big fans of ice cream – yes, it really has been around that long. They are thought to have started making their own sweet treats using snow and fruit. Probably not recommended nowadays for sanitary reasons!

The USA is one of the biggest consumers of ice cream the world over, and the average U.S. citizen seems to prefer vanilla over all other flavors. So many combinations and creations – and they opt for the generic choice! 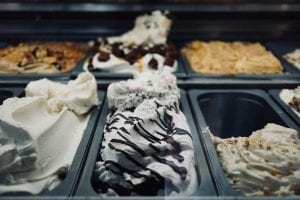 There’s a lot of milk that goes into making ice cream. In fact, you’ll need about 11L of the stuff to make even a gallon of the dessert favorite!

6. Ice cream trucks are more than a century old.

Ice cream vans and trucks are around 100 years old. It was Harry Burt who first brought mobile ice cream to the roads in the U.S. around 1920.

There’s an urban legend that the late Margaret Thatcher – once U.K. Prime Minister – invented the ‘Mr Whippy’ style and brand of ice cream. The truth is, she was a food chemist with the Lyons company – meaning that while she didn’t invent soft-serve ice cream, she certainly had a hand in helping to develop it.

8. Catherine the Great was a huge fan of the sweet stuff.

Catherine the Great, a Russian regal, was reportedly obsessed with ice cream to the point that she had her own porcelain ice cream serving sets created for her.

George Washington, first President of the USA, was also a huge fan of ice cream. It’s said that he once spent $200 on the treat during a single summer. This might seem a lot now – but factor in inflation, and he may have spent around $5,000 to $6,000 on the sweet stuff based on today’s money! 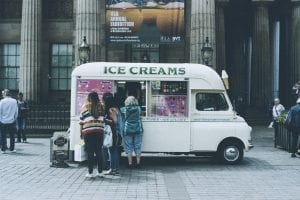 Many people suffer from what are known as ‘ice cream headaches’ when they eat the dessert too quickly. This comes from blood vessels in the top of your mouth constricting themselves, causing a nervous reaction. Don’t worry – brain freeze is temporary!

Ever wondered where Rocky Road ice cream gets its name from? It’s named after the Great Depression in the U.S. – used as something of a mood-lifter during economic instability.

Roger Moore, the actor famous for playing James Bond in the 1970s and 80s, is said to have invented the Magnum ice cream by requesting choc-ice be sold on a stick. Wall’s were listening! 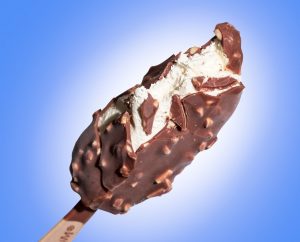 Why is ice cream bad for you?

Ice cream tends to get a bad rep thanks to it being high in sugar and often high in calories - many people opt for frozen yogurt as a less guilty alternative.

Is eating ice cream once a week bad for you?

Not necessarily, and it all depends on the type - keeping an eye on your regular saturated fat and sugar intake is important for long term health.

Why do bodybuilders eat ice cream?

Many athletes and bodybuilders chow down on ice cream as it contains a high calorie density - however, they have to work very hard to burn it all off.

Do you know any fun facts about ice cream?  Share them in the comments below!