Bizarre-looking, unique, and ever so slightly dangerous, the jellyfish has been a figure of fascination for people all over the world for as long as anyone can remember them. In fact, there’s probably plenty about these odd sea creatures that we still don’t know or understand.

Therefore, to try and get to the bottom of these maritime mysteries, we’ve set up a fact file for you to break down some of their biggest figures and known traits for you to digest. How much do you really know?  Here’s some interesting facts about jellyfish to find out!

1. A jellyfish is… strange stuff.

A jellyfish isn’t a fish, nor is it made of jelly – let’s get that well out of the way! A jellyfish is actually an umbrella term to cover all kinds of gelatinous creatures which appear to wobble around in the deep. Specifically, you may find that there are jellyfish with stingers, and those without.

2. The jellyfish isn’t a cold-blooded killer.

In fact, it’s a bit of a misconception that all jellyfish are inherently dangerous. It is never a good idea to approach one on the beach or while swimming, as there is a large stinging risk. However, there are actually some jellyfish – such as comb jelly – which won’t sting you.

3. They are truly alien-like.

Jellyfish bodies are truly bizarre. They are boneless, eyeless, brainless, and heartless. These are not horrible personality traits, but true facts about these confounding critters!

Instead, you will find that jellyfish are merely odd bags of swimming cells and tentacles. Who knows what the life of a jellyfish is like without a brain or a pair of eyes to guide you along? 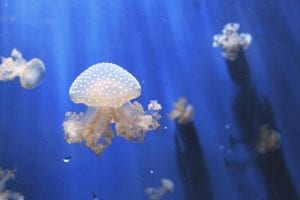 4. Jellyfish have one hole – each.

On top of this oddness, the mouth of a jellyfish is actually in the center of its main body. It’s also the same hole they discard waste from – gross, but very much the truth.

You’ll also find that jellyfish squirt water from here, too, but not in defense – it’s so that they can move along. However, they would just be drifting and bobbing along aimlessly!

6. Jellyfish could cause nuclear disaster.

Believe it or not, there have been multiple occasions where jellyfish have shut down nuclear power reactors. That’s because they can sweep aimlessly into water intake pipes, which can lead into nuclear reactors. That, of course, leads to a particularly sticky end for the jellyfish, and a frustrating shutdown for nuclear technicians.

7. There’s such a thing as the infinite jellyfish.

An even more bizarre fact about jellyfish is that some are perfectly able to regenerate. This means that – effectively – there are some jellyfish species that can theoretically live forever. The jellyfish with this particular skill is the Turritopsis nutricula.

The Turritopsis is able to regenerate again and again as it’s actually able to transform back into an earlier state – effectively regressing back into a child! However, it will normally only do this is it feels particularly stressed or anxious.

8. Jellyfish have feelings, despite having no brains to speak of.

Instead of physical brains, however, jellyfish rely on a very different set of instructions to keep them moving forward. They rely on a mass or net of nerves, which will help them to navigate and detect local changes. Otherwise – as they are completely blind – they would have no way of surviving.

9. Be careful around jellyfish.

Let’s be clear – there are plenty of jellyfish out there which have the power to seriously harm or even kill you. In particular, it is the box jellyfish you should be looking out for. This type of jellyfish has the ability to kill a fully grown human with poison darts. Believe it or not, the sting of just one dart has the power to kill you within minutes. Therefore, it is always best to stay away from anything you assume to be a jellyfish. 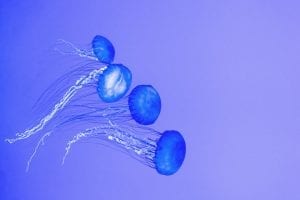 10. If not fatal, then irritating!

It’s thought that box jellyfish can also cause intense irritation of the skin, too. This can even happen long after a jellyfish has died. They really are prepared to take on any potential predators!

There’s a popular theory – and supposed remedy – for jellyfish stings. That is, you should urinate on a sting to help relieve the anguish. However, this is an urban myth – peeing on a sting won’t do a thing! What you should do – awkwardly enough – is try to remove stingers as best you can with tweezers. Ouch!

Jellyfish are predators for all kinds of sea creatures, such as turtles, sharks and penguins - and even sea anemones!

Is it ok for me to leave a jellyfish sting untreated?

No! Even if it doesn’t hurt too much, you must go and get treatment for a jellyfish sting - it could get worse over time.

Do you know any fun facts about jellyfish?  Share them in the comments below!