Kangaroos are, of course, a popular symbol of wildlife down in Australia – and the country has gone all out in adopting the critter as one of their main attractions! Kangaroos are truly astonishing beasts, and certainly aren’t worth tangling with!

Here are 13 fun facts about kangaroos, filling you in on what to expect from these bouncy mammals should you ever come up close to them.

There are plenty of marsupials in Australia which are fairly similar to the kangaroo, and which might actually fall under the same family. The name ‘kangaroo’ generally describes the biggest of its kind, while wallaroos, for example, are much smaller.

Kangaroos have impressive biceps. In fact, it’s not unheard of for male kangaroos to pose and flex in front of females to show how strong they are!

It’s entirely possible for a female kangaroo to take a break during their pregnancy. That’s because she can effectively halt the process of a joey leaving her pouch. This might sound like a bit of a perk, but keep in mind that female kangaroos generally spend much of their lives growing young! 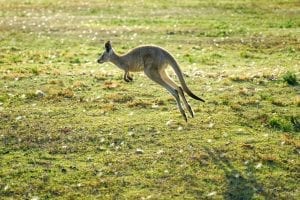 Kangaroos can’t walk. That’s because they are physically unable to move their legs the way that we can – meaning that they have to bound around to get from place to place!

In fact, no other animal of a kangaroo’s size uses this method of transport. It’s truly mystifying.

5.    Kangaroos have no reverse function.

They cannot move backwards – not many animals feel inclined to do this, but a kangaroo physically can’t. What’s more, they are unable to sweat – which means they have to lick themselves to cool down!

Red kangaroos, the very largest of the species, reach incredible top speeds. It’s likely that a red kangaroo will bound along to more than 65km per hour.

What’s more, the red kangaroo is able to leap over distances as long as 7.6m. If you ever had any hope of outrunning one, you might as well put them to bed now!

It’s rare you’ll see many kangaroos around on their own. That’s because they are amazingly social, meaning that you can see them congregate in scores. It’s entirely possible a group of kangaroos could include up to 100 such animals!

8.    There’s a collective term for these creatures…

A group of kangaroos is called a mob.

Kangaroos are actually born very early in the gestation cycle. That’s because, as you might have guessed, joeys will spend much time actually developing in their mothers’ pouches! 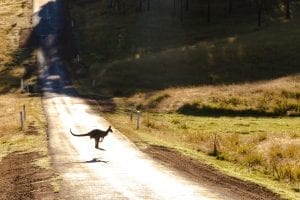 Believe it or not, it’s thought that there are more kangaroos in Australia than there are Australian natives!

11. Kangaroos can be hunted.

Kangaroo meat is widely eaten across Australia, though it is exported overseas as a healthy alternative to fattier meats. 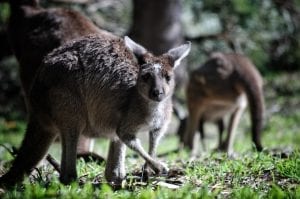 You won’t find kangaroos in the wild anywhere else in the world but Australia. They are completely indigenous and are part of the country’s much-protected ecosystem.

13. The kangaroo tail is a fantastic support.

Kangaroos are known to use their tails to help with mobility, to the point that they may actually use them as third legs of sorts!

How long do kangaroos live?

The lifespan of kangaroos depends on their environment, health, etc. However, generally speaking, kangaroos can live up to about 20 years old!

What are kangaroos pouches called?

A kangaroo’s pouch is called a marsupium, hence the name marsupials.

Thanks to their incredibly strong tails, balance and upper body strength, kangaroos are actually very well suited to boxing and often fight each other and other animals!

Do you know any funny or interesting facts about kangaroos?  Share them in the comments below!

Are you fascinated with Australian wildlife? Check out these fun facts about koalas!