Killer whales are some of the most beautiful creatures ever to grace the sea. Orcas, to use their more traditional name, are visually striking and always easy to spot thanks to their enormous size!

But how much do you actually know about these magnificent marine mammals? Let’s take a closer look with some fun facts about killer whales, uncovering some secrets and titbits along the way.

1. They won’t harm you on purpose!

Orcas are called killer whales as they tend to be fantastic hunters. It’s a common misconception that they will attack humans on purpose. That’s thanks to the ‘killer whale’ label being taken far too literally in many cases!

Orcas are technically dolphins. In fact, they are the biggest mammals in the dolphin species, and can grow up to 32 feet in length, meaning that some can bob around at roughly the size of some of the biggest vehicles you’ll find on the road right now.

3. Orcas are found all over the place!

While humans are easily the most widespread species on the planet, orcas and killer whales come in close second. That’s because they are amazingly versatile and are keen to adapt to various climates and temperatures. That’s why you’ll find them surfacing in polar conditions as well as near the tropics. However, they do tend to prefer access to the shoreline. 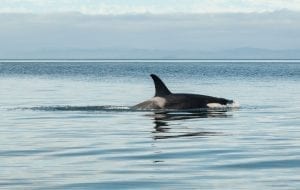 4. They love to stick together.

Killer whales are very social and tend to live in large groups of up to 40. These groups are called pods. Some pods will actively hunt down prey and can be quite brutal to local marine life, while others are more passive and will simply scoop up fish as they come along.

5. Killer whales are always on the hunt.

Killer whales and orcas are some of the best predators on the planet, not just in the water. They have incredibly diverse diets, meaning that you will often find them feasting on birds, fish, octopuses, turtles, seals and more.

6. They’ll eat pretty much anything – because they can!

Killer whales don’t tend to be too picky about what they eat – they’re big enough to call the shots when it comes to the menu! However, weirdly enough, it;’s thought that there has been at least one occasion where an orca has eaten a moose!

7. They are faster than they look.

A killer whale is not only enormous, it’s pretty fast in the water, too. Despite its tremendous size and bulk, an orca is known to be able to swim up to 48 km per hour. Try outswimming that in a hurry!

8. Males are almost double the size of females.

Male orcas weigh much more than females, tipping the scales at around 9,000kg maximum. Females tend to be daintier at around 5,500kg.

9. They are very toothy beasts!

Unlike many animals referred to as whales, and other mammals of the deep, killer whales and orcas have teeth. In fact, a killer whale is likely to have up to 45 gnashers at any one time. However, they only ever use their teeth to tear into their fresh kills, as they are known to swallow small prey whole. They’re not known for chewing! 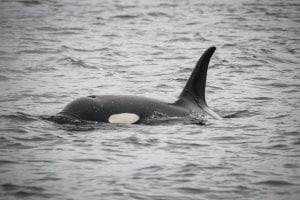 10. They are great at going undetected!

Killer whales have curious colorings which help them to be especially sneaky while on the hunt. That’s because their dark, black markings help them to sink beneath the water’s surface undetected, while their white underbellies will help them to reflect light entering the water. All things considered, it might be too late before an unsuspecting fish sees an orca on the approach.

11. They tend to have favorite foods.

Orcas tend to choose what they eat depending on the general feeling of their family, or pod. This means that some killer whales will hunt for fish, while others may prefer seal meat. They tend to follow the crowd a fair bit, on the whole!

12. Orcas need to focus on breathing while they sleep.

Orcas and killer whales have very strange sleep patterns. They are unable to breathe automatically while they sleep, which means they must always keep a part of the brains active while they slumber.

They have a strange ability to therefore halve their brains – allowing one half to stay awake, to keep breathing and to keep on the alert, while the other half falls asleep and rejuvenates. 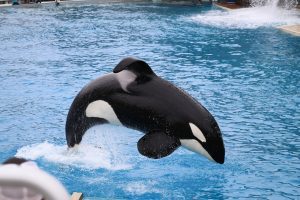 An Orca at SeaWorld San Diego

A killer whale has an impressive lifespan, largely thanks to their status as apex predator of the sea. They can live up to 100 years old in the wild! 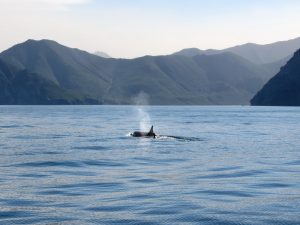 Orca in their natural habitat

Can killer whales be friendly?

Despite their names, killer whales tend to be very playful, and are very family-oriented.

The biggest killer whale ever recorded was 32 feet long, and weighed in at 20,000 lbs!

Are killer whales aggressive towards humans?

No - they won’t ever attack you on purpose.

Do you know any fun facts about killer whales?  Share them in the comments below!