Looking to increase your knowledge on the ancient Egyptian pharaohs? Check out these 11 interesting facts about Tutankhamen, arguably the most famous pharaoh of all.

Tutankhamun died at just 18 and is widely believed to have been quite unwell for most of his life.

2. He really wasn’t well when he passed.

DNA analysis shows he suffered from malaria – and CT scans indicate he was suffering from a rare bone disorder — Kohler disease.

This would explain the deformed left foot he would have had his whole life.

3. He’s buried with his walking aids.

Tutankhamun’s tomb contains upwards of 130 different walking sticks. Many of them were used, potentially by the king himself. 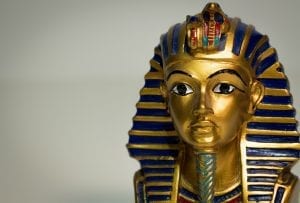 The famous gold mask that has come to epitomise Ancient Egypt is King Tut’s death mask.

5. We actually don’t know that much about Tut’s past.

He was born circa 1334 BC. The identities of his parents are not definitively known.

6. Where was King Tut born?

It’s thought he was born in his father’s hometown of Akhenaten.

7. King Tut may have been beaten alive – or dead.

There is strong evidence that the serious damage inflicted to his body was done just before, or just after, his untimely death.

8. Tut had a pretty grim life.

The mummification process was also performed far more hastily than tradition would dictate.

An unexpected chemical reaction caused his mummy to catch fire inside the coffin. 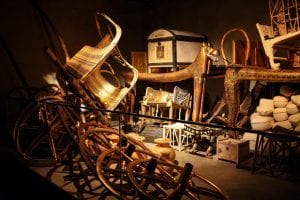 Burial chamber, Valley of the Kings

The nature of the damage to his chest and legs indicates a hunting or chariot accident.

They may also have resulted from a brutal death on the battlefield.

His original name was Tutankhamun which means “living image of Aten”. Aten was the Sun god in Ancient Egyptian religion.

Did King Tut have kids?

It’s thought that King Tut sired two girls, though they died at birth.

Where is King Tut’s tomb?

King Tutankhamun's tomb, discovered by Howard Carter on November 4th 1922, is in the Valley of The Kings.

How much is King Tut’s mask worth.

Do you know any interesting facts about Tutankhamen? Share them in the comments below!

Are you fascinated with the rituals of Ancient Egypt? Check out these amazing facts about mummification.