Located in west-central Honshu, in the scenic valley of the Kamo River and its surrounding mountains, Kyoto is one of the most historic and attractive city and a place of endless fascination and delight! The city is the heart of traditional Japanese culture and charms its visitors with quiet temples, colorful shrines, and divine gardens.

If you admire tradition and love history, Kyoto is just perfect for you! But before you book your trip, here’s a refined collection of fun facts about Kyoto to help enlighten you…

1. Kyoto can be wonderfully peaceful.

Kyoto is in the western part of Japan’s largest island, Honshu, and is located in a peaceful valley surrounded by mountains on three sides.

2. It’s been around for centuries.

Its origins go back to the 6th Century.

3. It is thought to be the capital of Buddhism.

Kyoto has been a Buddhist centre since the 8th century and is in many ways the intellectual heartland of Japan. 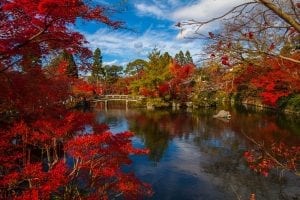 Kyoto was the capital of Japan for more than one thousand years.

5. It was once overseen by Emperors.

The history of Kyoto starts in 794 when Kyoto was chosen as the new seat of Japan’s imperial court. The Emperors of Japan ruled from Kyoto in the following eleven centuries until 1869, when the court relocated to Tokyo.

The city is now the capital city of Kyoto Prefecture located in the Kansai region, as well as a major part of the Kyoto-Osaka-Kobe metropolitan area.

7. Kyoto wasn’t on the US radar during WWII.

Wars have raged across Kyoto down the centuries, but the city largely escaped conventional World War II bombs because it was not included in American invasion plans.

8. As a result, much of the architecture pre-war is still standing.

The Imperial City of Kyoto has more pre-war buildings than most other Japanese cities taken together.

9. There are many, many sites of worship here.

The city has 1,600 Buddhist shrines and 400 Shinto Temples. Among these, the 17 historic monuments of ancient Kyoto are a collective UNESCO World Heritage Site. 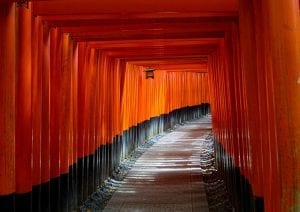 These heritage sites attract many people since each embodies a respective era in which it was constructed.

11. The shrines give Kyoto a famous nickname.

Kyoto is popularly known as the City of Ten Thousand Shrines, of which the Shimogamo Shrine is the most venerable. It stands in honor of the Mother of the God of Thunder.

12. Kyoto was built in anticipation of an emperor.

Buddhist monks built the original structure in 678 AD ahead of a visit by Emperor Tenmu who became the first monarch of Japan. 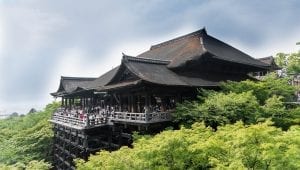 13. There is a free-roaming shrine.

Shimogamo Shrine is part of the larger Kamo religious complex. This is within an area landscaped according to ancient Japanese tradition, where visitors may freely roam.

Fushimi Inari-taisha is the head shrine of the kami Inari, located in Fushimi-ku, Kyoto. The shrine sits at the base of a mountain also named Inari which is 233 meters (764 feet) above sea level, and includes trails up the mountain to many smaller shrines which span 4 kilometers (2.5 mi) and take approximately 2 hours to walk up. 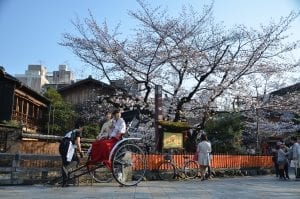 16. There’s a hugely famous temple that dates back to the 8th century.

Kiyomizu-dera is a Buddhist temple in eastern Kyoto. It is one of the most famous and celebrated temples in Kyoto. The temple was founded in 778 AD and contains buildings from the 17th century, including the main hall designated as a National Treasure.

17. Where did emperors rule from?

The Kyoto Imperial Palace is the former ruling palace of the Emperor of Japan.

18. Kyoto had a massive makeover.

Following a period of wanton destruction in the 15th century, Emperor Toyotomi Hideyoshi refashioned Kyoto in the style of the City of Chang’an that had a quarter of a million inhabitants by the year 2 AD, when recorded history begins.

During the 16thcentury, Emperor Toyotomi Hideyoshi doubled up the number of north-south streets. This created the familiar rectangular blocks with shorter side streets that form the fascinating older suburbs adored by visiting tourists. 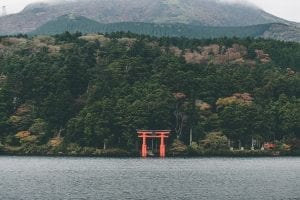 19. It was once the biggest city in the country.

Historically, Kyoto was the largest city in Japan, later surpassed by Osaka and Edo (Tokyo) towards the end of the 16th century.

20. Many see Kyoto as the true capital.

Home to many cultural landmarks and historical sites, Kyoto is thought of as the heart of Japan.

The Kyoto Municipal Museum of Art and the Kyoto National Museum are great places to see the magnificent work and unravel the history of the city. 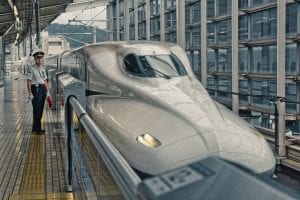 Kyoto University that was established in 1897 is one of the former imperial universities. It’s considered the best in Japan after Tokyo University.

24. Kyoto has named an important agreement.

The Kyoto Protocol is an international agreement linked to the United Nations Framework Convention on Climate Change. It was adopted in Kyoto, Japan, on 11 December 1997 and entered into force on 16 February 2005. The protocol aims at reducing greenhouse gas emissions globally. 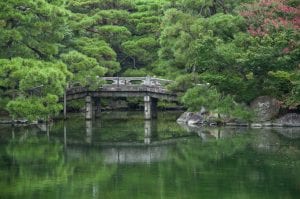 25. Kyoto is a little odd when it comes to rail travel.

The city has seven independent rail services. To go places, you need to rush from one to the other. This means you need different tickets and sometimes there is a hefty hike between stations.

26. The market scene is amazing!

Nishiki Market is a marketplace in downtown Kyoto. Rich with history and tradition, the market is renowned as the place to obtain many of Kyoto’s famous foods and goods.

27. Kyoto’s food and drink are delicious.

Kyoto is justifiably renowned for its remarkably authentic cuisine. Being distant from the sea and having so many Buddhist vegetarians resulted in the development of 13 varieties of vegetables. 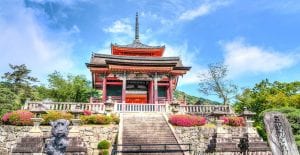 Many of Kyoto’s restaurants are in traditional wooden buildings, where you can have your brunch in nature’s lap.

Today, the city is one of the centres of the Keihanshin Industrial Zone, the second-largest urban and industrial agglomeration in Japan.

Kyoto is considered one of the safest cities in the whole of Japan, thanks to exceptionally low levels of crime.

Kyoto is generally cheaper than Tokyo to visit, and may even be more affordable than most cities out east.

What should I eat in Kyoto?

Kyoto is famous for its amazing street food as well as its fire ramen, its yudofu and green tea treats - give them all a try!

Do you know any fun facts about Kyoto? Share them in the comments below!