Lake Como is one of Italy’s best known bodies of water. Backing on to the Alps, it’s a popular tourist resort for people that explore the mountains, as well as the rich and famous. Here’s some fun facts about Lake Como…

Lake Como is actually a glacial body of water, and it’s around 56 square miles in terms of total area. It’s easy to spot from above thanks to its distinctive y-shape.

Lake Como is one of the most visually-stunning resorts in Northern Italy. Home to fantastic flora and fauna, as well as breath-taking sea views and intriguing historic buildings, the area is also well-known for being a celebrity haunt for many famous people – such as Mark Twain, George Clooney and Catherine Zeta Jones.

3. The name has changed a lot.

The lake’s name has an interesting history. It was known to the Greeks in ancient times as Lario, and as Lacus Larius to the Romans. However, over time, this changed to Lacus Comensis, before being shortened to Lake Como. 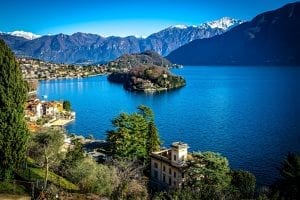 It’s thought that Lake Como was once home to a unique dinosaur lurking beneath the waters. Specifically, it was the Lariosaur, an aquatic beast which many call ‘Larrie’, with myths and rumors circulating that the beast still lives below to this day.

Lake Como has been seen as the backdrop for many big Hollywood movies. For example, it’s likely you may have seen Star Wars movies films here, as well as James Bond pictures such as Casino Royale.

6. The shores are spectacular.

The lake has an amazing shoreline, too. It’s thought that the shores of Lake Como extend for up to 100 miles.

7. You’ll never explore it all!

Lake Como is a popular resort not only with the rich and famous, but also with water sports enthusiasts. It’s likely you will find windsurfers, kite surfers and more taking in the blustery air and fantastic water quality.

9. It’s got one famous island.

The lake is also curious for the fact that it has just one island and is mostly water. The island in question is Isola Comacina, which is open for tours and trails. It’s only thought to be around a kilometer long. 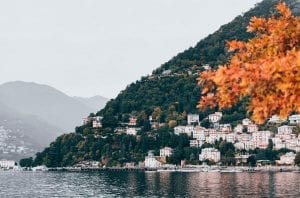 Across the Mediterranean, you will still likely find plenty of villas where people live and holiday. These buildings are said to date back to Roman times, and not only that, they are thought to have started in areas such as Lake Como. In fact, it’s thought that renaissance masters such as Leonardo Da Vinci had set up their own villa spaces here.

Can I swim in Lake Como?

Technically you can, but it’s not advisable. There are dark water spots and tangled weeds out here, which can be very dangerous.

Are there any sharks in Lake Como?

No - but you’ll likely see a big pike or two!

Lake Como is famous for being exceptionally clean - you’re safe!

Do you know any fun facts about Lake Como?  Share them in the comments below!