As one of the most beautiful spots on Earth and a very popular tourist site, Lake Superior is known across the globe! People from all over travel to the lake every year to explore the clear waters, shipwrecks, and incredible wildlife in the area. But Lake Superior has so much more to it, and many of us don’t know some of its most famous secrets! With that in mind, here are some fun facts about Lake Superior!

In total, there are about three quadrillion gallons of water in Lake Superior! Now that is a big bath!

3. How big is the biggest Great Lake? 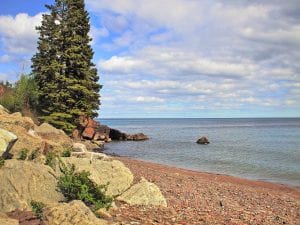 4. It’s connected with rivers and streams, too.

Lake Superior has about 300 streams and rivers that connect to it. They flow both in and out of the lake.

5. You can go swimming in Lake Superior!

As a freshwater lake, it may seem like the ideal spot for a swim! However, even during the warmest time of the year, Lake Superior only reaches about 7.2 degrees Fahrenheit. Definitely not the warmest swim, but it can make for great diving expeditions!

6. There’s shipwrecks all around!

7. Its waters are surprisingly clean and clear.

Lake Superior is also known for having very clear waters! You can easily see through the clear waters for about eight feet, making it one of the most picturesque areas in the country.

8. It’s been mined many times.

Believe it or not, Lake Superior has also been used for mining! Resources such as iron, copper, silver, and even gold have been mined in the lake.

9. A lake of various states!

Lake Superior is positioned such that it borders three US states. It borders Michigan, Minnesota, and Wisconsin. 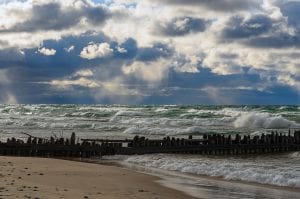 Lake Superior is so big that it is believed that it holds about 10% of the entire world’s freshwater! In fact, if you were to cover the Americas in the water in Lake Superior, there’d be about a foot everywhere!

11. There are natural wonders everywhere to be seen.

Lake Superior is known for being home to multiple incredible wildlife species, including 80 different species of fish and thousands of birds! You’ll commonly see eagles, owls, and woodpeckers in the area. 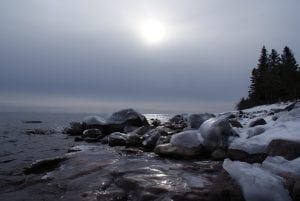 Is it really safe to swim in Lake Superior?

You can swim in Lake Superior; however, it is known for being very cold! And, in the winter months, the lake can get pretty stormy and dangerous. Never go swimming in the lake on your own!

Is Lake Superior in the US or in Canada?

Although Lake Superior is often considered to be in the US, it actually has a portion in Canada! It borders Ontario as well as Minnesota, Wisconsin, and Michigan.

What is Lake Superior famous for?

Lake Superior is known for being the clearest of the Great Lakes, as well as being the biggest freshwater lake in the world. It also has great mining possibilities and is known for its shipwrecks and cemetery.

Do you have any facts about Lake Superior? Please share them in the comments below!
Further reading:
https://factcity.com/tag/lake-superior/
https://www.lakesuperior.com/
https://www.britannica.com/place/Lake-Superior-lake-North-America