Leopards really are magnificent creatures! Agile and spry, they are well-known for their symbolism as well as for being popular with safari-goers. But what is it about the spotted leopard that really sets them apart from the other big cats? Keep reading, and we will fill you in on some fun facts about leopards.

Amongst leopards, the snow leopard is the best at leaping, easily achieving 50 feet in one bound – impressive!

3. Leopards don’t need to drink too much.

Leopards are carnivores. They also drink very little because they are able to consume most of the fluid they need, from the flesh or what they kill. 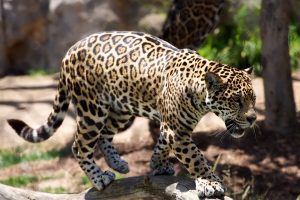 4. Sadly, leopards are a threatened species.

Leopards are becoming increasingly rare with some on the endangered list. Rarest of all is the beautiful Amur Leopard, which naturally lives in Korea, North Eastern China and Russia. Recent studies conclude that it is estimated only 30 remain alive in the wild today.

5. Leopards are very quick off the mark.

Leopards are built for speed – so easily catch prey swiftly and quietly. Once caught,prey is usually killed instantly by a strong bite to the neck.

Leopard babies are called cubs. They are usually born as twins or triplets! Leopards mate all year round, but separate once cubs are independent.

7. Leopard mothers are very careful when hiding their young.

Leopard moms give birth in a lair which can be amongst boulders, hidden in thickets or termite mounds as well as other suitably shaped and discreetly hidden safe places. As an extra precaution to guard her cubs, leopard moms change the lair every few days – and cubs are carried one by one to their new temporary home.

9. Why do they climb up trees so much?

Treetops give leopards a good vantage point from which to see predators and prey. They also sleep in treetops in relative calm and safety. They are agile climbers and have been known to carry their heavy prey into treetops to devour at leisure! 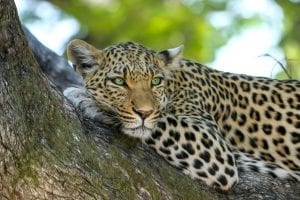 10. The leopard diet is pretty wild.

Leopards eat a variety of animals including rodents, reptiles, insects, porcupines, monkeys, baboons, gannets, and fish. They also have a taste for mongoose!

11. How can I tell a leopard and a jaguar apart?

Leopards cannot be kept as pets. They are wild animals who mostly live a solitary life from choice – also, they are carnivorous, and so satisfying their dietary requirements would be difficult!

They also require vast amounts of space on which to exercise, play and hunt. They cannot be trained much in the same ways as lions and tigers. 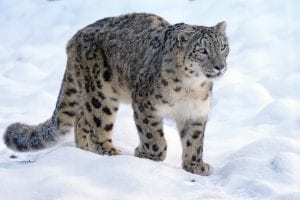 13. They have amazing hearing!

Leopards possess acute powers of hearing, five times the recognition of sounds to humans! No wonder they are such great hunters, then!

Leopards aren’t to be toyed with. Of all the big cats in the wild, the leopard is one of the most likely to try and kill a human, meaning you will likely do best holding back!

Are leopards the strongest of the big cats?

Despite their relatively slender size, leopards are often regarded as the strongest of all the big wild cats you’ll find. They can drag they prey into trees, for example!

Are leopards the deadliest of big cats?

Leopards are regarded as very dangerous, but no big cat is as deadly as the fearsome jaguar. Jaguars tend to be extra vicious when it comes to killing prey.

Do you know any fun facts about leopards? Share them in the comments below!