Lightning literally brightens up the night sky! This burst of electricity can be dramatic and fascinating from a distance – but can be deadly if you are incredibly unlucky! Here are some fun facts about lightning that you may not be aware of.

1. Lightning strikes all over the world, all of the time.

It is calculated that 44 lightning strikes occur every second of every day! That equates to 3,000,000 daily. 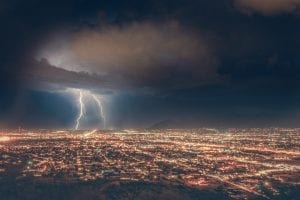 Fulgurite is a product formed by lightning striking sandy soil, or sand. It is formed by the fusion of grains which bond together in tubular shapes. They take on a ‘glass-like’ form.

5. Can helicopters cause lightning?

6. Plants can actually benefit from lightning.

Plants rely on nitrogen to grow strong and healthy. During lightning strikes, nitrogen oxide combines with moisture which becomes rainfall and nourishes plants. The heat of lightning acts as a catalyst for nitrogen and oxygen to bond. Plants get a real boost from this – they usually obtain these nutrients from algae and bacteria!

7. Ever measured a bolt?

The strike of lightning refers to the physical aspect of the action but the ‘bolt’ is the part we can attempt to measure. They often appear bigger in the night sky and the light can extend for up to 3 miles! Their width is usually smaller than most people expect, at around 2 to 3 centimeters.

8. Here’s a weird fact about volcanoes…

Volcanoes can cause lightning. As they eject plumes of heat and matter into the atmosphere, hot volcanic ash and earth collide to form an electric charge. That can trigger lightning to follow.

Some church bells are engraved with the words; ‘fulgura frango’. This means, ‘I chase lightning’! Until the late 1700s, many people believed that the chime of church bells repelled lightning. At the onset of thunderstorms, bell ringers would run to their respective church towers to pull the ropes to make bells chime! 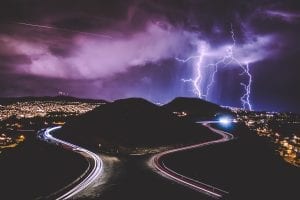 Bell ringers ceased this practice because it was so dangerous! In France, 103 bell ringers were killed as a direct result of this in the space of 30 years.

11. Want to keep track of strikes?

Radar can be used to measure lightning. Radar takes readings from electromagnetic pulses. Lightning emits them, so readings can be recorded. 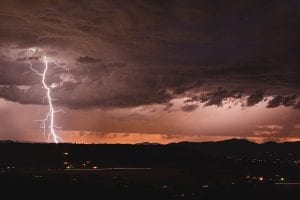 Which place has the most occurrences of lightning?

Venezuela has the most incidences of lightning. On average of an annual 260 stormy days, 150 produce lightning!

Is it true that lightning doesn't strike in the same place twice?

No, contrary to the expression, lightning most certainly does often strike in the same place twice and sometimes more! The Empire State building, for example, is said to be struck by lightning an average 23 times per year.

How much heat is generated by lightning?

Scientists have calculated that heat from lightning can be three times hotter than the Sun - reaching a temperature of 50,000 degrees Fahrenheit!

Do you know any fun facts about lightning? Share them in the comments below!

This page was last modified on December 24, 2021. Suggest an edit