Are you looking to boost your knowledge of Spain and improve your chances of winning the next geography quiz? Check out these 30 fun facts about Madrid!

1. Madrid is an ancient city.

Madrid was founded around 860 A.C.

2. You’ll have to look to the village to learn more…

The origins of the Madrid we know today lie in the village surrounding this ancient Arabic-then-Spanish military defense-post in the Castilian mountains.

3. It was once under Roman rule.

Madrid was ruled by the Romans from the 2nd century and was later occupied by the Moors, until 1083. 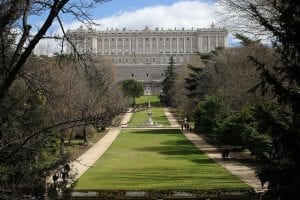 4. The Madrid Metro has been around for a long time.

The Madrid Metro was commissioned on a Royal decree in 1916. Construction was finished by 1919 and King Alfonso inaugurated the metro line himself on October 17th, 1919. At the time, however, the metro was just a single line that ran for less than four kilometers!

5. The Metro is massive!

When the Madrid metro first opened to the public, a total of 56,220 passengers rode that single line on the first day. Today, Madrid’s metro system has grown to over 300 stations with 13 seperate lines spanning roughly 300 kilometers that two million passengers use every day!

In the 1930s during the Spanish civil war, Madrid was the first European city to be bombed from the air.

7. Spain’s been picky about its capital.

8. It’s been recognized for its culture.

Madrid became the European capital city of culture in 1992.

9. Madrid itself is more than a city.

Often escaping notice is the fact that “Madrid” is not only the name of the world-famous capital but also one of the 17 autonomous communities of Spain. 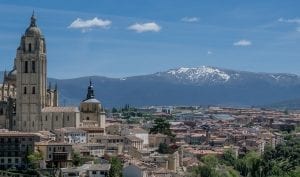 The name Madrid could be over 2,200 years old when it was first mentioned in ancient Arabic records, Mayrit or Magerit, which means “place of abundant water”.

Madrid is home to the official residence of the Spanish monarch and also where the government sits.

12. However, the Royal Palace doesn’t do what you think it does.

The Spanish king does not reside in the Royal Palace in Madrid.

Even though the Palacio Real is still the official royal residence, the members of the royal family have been living and receiving guests in the petite Palace of Zarzuela since 1962. 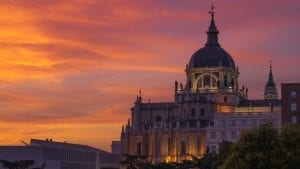 The largest and busiest Spanish airport is located in Madrid.

14. Madrid’s size isn’t to be underestimated.

Madrid is the second biggest city in the European Union, after Berlin.

There might be palm trees in Madrid, but the fact is that the voluptuous city of Madrid lies at an astounding 667 meters above sea-level, many places in the north even surpassing the 700 meters mark! 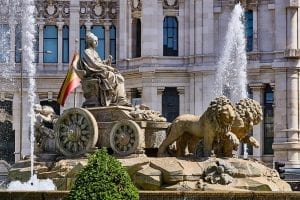 The Warner Brothers museum is located in Madrid, where everyone can see the characters from their favorite movies.

17. Madrid is known for its bullfighting.

There are two bullfighting rings in Madrid, Las Ventas, and Vista Alegre.

The largest bullfighting area in Spain is Las Ventas, which can seat almost 25,000 people.

18. Ever heard of Carmelo the bull?

The most famous bull in Madrid goes by the name Carmelo. He was spared from death in the bullfighting ring as he’s battled both a lion and a tiger and won! 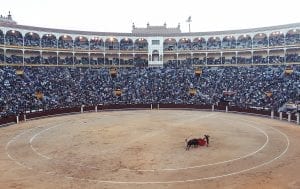 Madrid’s Prado museum has one of the finest collections of European art in the world.

20. It easily breaks the top four.

Madrid is classed as the fourth richest city in Europe after London, Paris, and Moscow.

The only monument to the devil in the world is located in the Retiro Park. 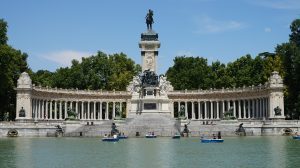 Madrid has more green space per person than any other city in the world, with 35% of the city made of parks and green space.

23. Many people come to study in Madrid.

Madrid is home to an astonishing amount of students. Not surprisingly, this is since Madrid is one of the unsurpassed hot-spots of university education in Europe.

The University of Salamanca located in Madrid is one of the four oldest educational institutions in Europe.

Real Madrid FC is the world’s most successful football club according to FIFA and the second-richest team in the world. They’ve won the European Cup 13 times in total – that’s more European Cups than any other team! 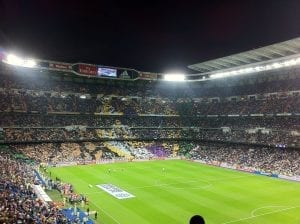 25. Many celebrities were born here, too!

Madrid is the stage of Netflix’s smash hit Casa de Papel and the largest city in the Iberian Peninsula.

Madrid is the financial center of Spain.

The Bankia Tower is the tallest building in Spain, designed by Sir Norman Foster, who was awarded a knighthood in the Queen’s birthday honors and honored in 1999 with a life peerage, becoming Lord Foster of Thames Bank. 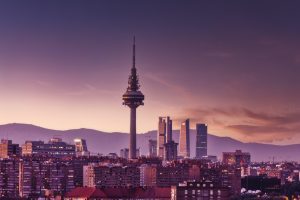 28. What’s the city’s symbol really about?

The official symbol of Madrid is a bear feasting on berries from the Madroño tree, which stands for Madrid’s growth and represents the possession and importance of wood.

These two emblematic figures represent the official Coat of Arms of Madrid.

The patron saint of Madrid is San Isidro was married to another saint!

Madrid was ranked as the second-best place to visit in Europe 2019 by Lonely Planet thanks to the city’s relentless dedication to make it pedestrian and environmentally friendly. 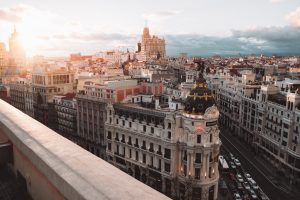 What is Madrid best known for?

Madrid is likely best known for its art collections, its museums, its ancient history and its royal connections.

Both make for wonderful vacations! However, many people say that Madrid, on the whole, has more to offer.

Are there any beaches in Madrid?

Madrid seems to have just about everything… bar beaches! There’s a sandy beach zone near the Manzanares River, however.

Do you know any fun facts about Madrid? Share them in the comments below!

This page was last modified on December 22, 2022. Suggest an edit