These fun facts about Meerkats will shine a light on these mysterious animals, answering your questions with lots of fascinating trivia…

Did you know meerkats bark, despite baby meerkats being called kittens?

2. Will meerkats gang up on you?

They look like the friendliest creatures, yet their collective noun is a gang of meerkats.

3. They have underground lairs.

They are ferociously territorial, yet all run underground together when threatened. 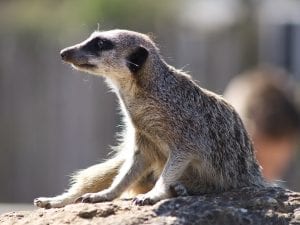 4. Their numbers are impressive.

Meerkats live in family groups called mobs, gangs or clans and there between 30 to 50 members in families.

They grow to a length of 12 inches, weigh about two pounds and are members of the Mongoose family.

To make up for for their small height, meerkats have a habit of standing on their back legs, propped up by their tail when acting as lookout.

7. Meerkat gangs are run by women.

These huge gangs of meerkats are led by an alpha pair with the female being the dominant leader. Girl power!

8. There is a babysitting rota.

A babysitter stays behind to watch over the new-born pups and their duty rotates to different members of the gang. The said babysitter will often go all day without food.

Meerkats are perfect snack-size treats for predators like eagles and jackals. 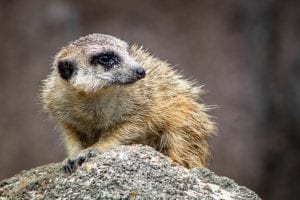 At least one meerkat will always stands on guard for the gang’s social group.

These cute little critters love to eat scorpions. First, the meerkat bites off the venomous tail, then everything else. If scorpions aren’t available, meerkats will also dine on anything they can overpower, such as beetles, spiders, lizards and small rodents.

They’ll even eat snakes, which is probably why they’re immune to the venom – They are immune to scorpion venom too and can withstand up to six times the snake venom that would kill a rabbit.

Those dark markings under the eyes? They act like sunglasses, allowing the meerkats to see in the harsh desert light.

Their eyes also have a clear protective membrane that shields them from dirt while digging. This does help, as meerkats are excellent diggers and can dig dirt that is almost their body weight! 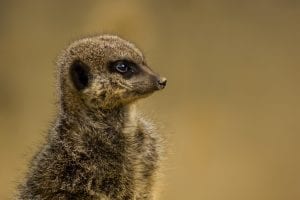 13. It’s unlikely you will see a meerkat drink.

Living in the deserts and grasslands of southern Africa, meerkats survive without drinking water – they get all the moisture they require from the insects and grubs they feed on.

Meerkats can run at a speed of up to 37 mph!

15. Meerkat longevity can double in captivity. 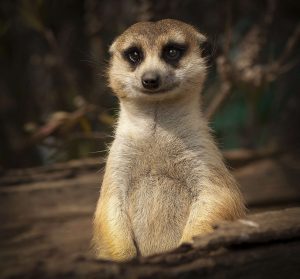 Meerkats are known to share their burrows with all sort of interesting animals, such as mongoose, ground squirrels and sometimes snakes!

They can bite when threatened, but it’s even thought that one in five meerkats may be killed by their own kind.

It depends - they are fiercely territorial, which means the older they get, the less chance you’ll have of making a friend.

When content and happy, meerkats are known to purr!

Do you know any fun facts about meerkats? Share them in the comments below!