Milan has it all, from the glamorous world of fashion and design, professional football teams, to amazing Catholic cathedrals! And let’s not forget the popular Ambrosian (or Milanese) chants that are more commonly known as the basis of our modern musical scale system. Impressive, right!

1. Milan is one of Italy’s most important cities.

Milan is the second-largest Italian city and the economic capital of Italy.

2. Many empires have made their bases here!

Before becoming Italy’s industrial, commercial, and fashion capital, Milan was in the hands of Celts, Romans, Goths, Lombards, Spaniards, and Austrians.

3. However, the Gauls got here first.

The earliest settlement on the site of Milan was founded around 600 BC by the Gauls.

This settlement in the following centuries became the capital of the Celtic population Insubres that lived on the north side of the River Po. 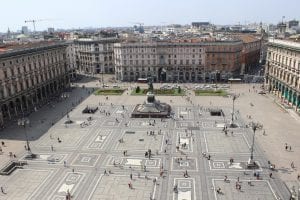 4. The Romans made the city more powerful.

At the time of the Roman conquest in 222 BC, Mediolanum, or “sanctuary” as it was then called was already one of the most powerful cities of the region.

Under the emperor Augustus, the city acquired increasing prestige becoming the second city of the Empire, behind Rome. In the 3rd century AD, the city was assigned as a residence and main administrative center for the emperor in the West.

5. However, the city started changing hands… a lot.

Emperor Constantine I affirmed the city as the seat of the vicar of Italy. Attila the Hun devastated the city in the year 452, and in 539 the Goths destroyed it.

Milan was conquered by the Ostrogoths, in 569 by a Germanic tribe, and by Charlemagne and the Franks in 774.

6. There’s more than just Christmas in December for the Milanese.

Each year on December 7th, Milan celebrates its “City Day” in tribute of the patron Saint of Milan, Saint Ambrose.

7. Milan’s responsible for a dictionary addition.

In the 16th century, the production of luxury goods in the area was so amazing, that the city took the English word “milaner” meaning fine wares and luxury apparel, as its name.

Built in 1778, the leading opera house and ballet theatre in Italy was named: La Scala!

In August 1796, Napoleon and Josephine stayed in the famous Milan’s Palazzo Serbelloni for 3 months.

Napoleon created the Kingdom of Italy and was crowned King in the Milan Cathedral in 1805. 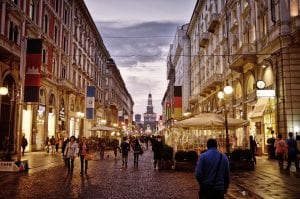 10. A conservatory for music?

Established in 1807, the Milan Conservatory was built on the premises of an ancient monastery, and it still hosts many renowned concert series each year.

In 1833, Giuseppe Verdi came to Milan to enter the Conservatory, but he wasn’t accepted. Now, the Milan Conservatory bears the name of the great “rejected” composer.

Internazionale Milano, or Inter Milan, also considers Milan as its home. They split away from the AC Milan Football Club in 1908 and took the name Internazionale because the founding members insisted on forming a truly international team!

Inter Milan has another nickname, nerazzurri, which comes from the Italian words for black and blue! 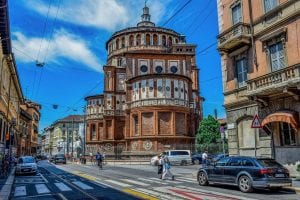 Giorgio Muggiani designed the logo of Inter Milan, with black and azure colors set against a background of stars, meaning “we are brothers of the world.”

The Derby Della Madonnina, also known as the Milan derby is a soccer match between Inter and AC, the two rival Milanese clubs.

The Derby Della Madonnina took its name in honor of the Virgin Mary statue that is on top of the Milan Cathedral.

15. Milan’s cathedral was a long-standing monolith.

Milan’s Cathedral, also known as the Duomo di Milano, is the second-largest cathedral in the world covering over 100,000 square feet! 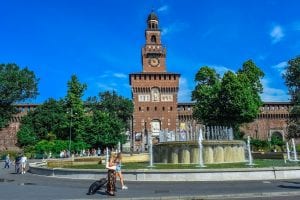 16. There’s stacks of statues inside!

The Cathedral has more statues than any other building in the world, 3,400 statues, 135 gargoyles, and 700 figures.

17. Red bulbs are important in the cathedral.

Sometimes a red light bulb marks the apse in the Milan Cathedral that shows a spot where one of the nails from Jesus’ crucifixion was supposedly placed.

18. Iconic works of Da Vinci can be seen here.

In the Church of the Renaissance Santa Maria delle Grazie in Milan, you can see the mural painting “The last supper” by Leonardo da Vinci. 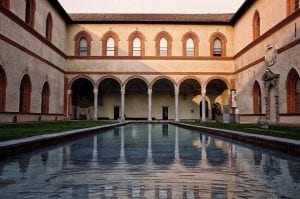 The Pirelli Tower in Milan is the first skyscraper ever built in Italy.

Milan was one of the few European cities that weren’t affected by the plague in the XIV century.

All the most famous works of Leonardo da Vinci are stored in the National Museum of Science and Technology. 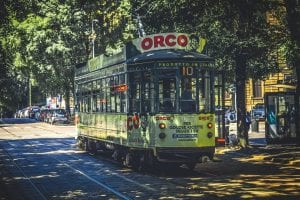 22. It’s the opera capital of Europe.

Milan became the focal point of opera during the Austrian rule.

The trolleybus system in Milan characterizes a ring around the center of the city, which has branches to the suburbs.

24. Milan was hit hard during wartime.

During the Second World War, Milan was subjected to carpet bombing, raids were almost continuous, and Milan was covered with a huge number of bombs. 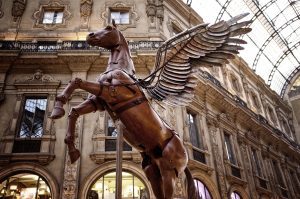 25. It was also a textile capital.

In the 19th century, Milan became a large production center in textiles.

26. You’ll find it an epicenter for fashion, too.

In the 1960s Milan emerged as one of the fashion capitals of the world.

2009 marks the year that Milan officially took the title of Fashion Capital of The World. 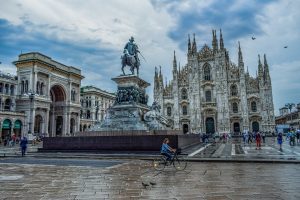 28. Shopping here is spectacular, too.

In the 20th century, Milan had a growing number of fabulous designers.

30. Learning the scales? Start in Milan!

The Ambrosian chants of Milan are among the very first codified music that led to the development of scales. 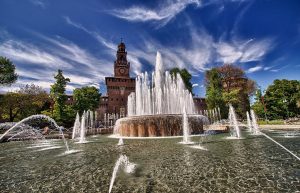 One of the oldest secular traditions of Italians is one of the aperitifs. Almost all Milan’s cafes and bars offer an aperitif usually between 19:00–21:00.  Saluti!!

Is it expensive to visit Milan?

It all depends on what you do when you’re there! It’s thought to be in the top ten most expensive tourist cities in Europe, but towards the lower end.

Do people speak English in Milan?

As you might expect from Italian cities elsewhere, there is a strong English-speaking presence in Milan, but the local people will always appreciate visitors trying to speak Italian.

Does it ever snow in Milan?

It does occasionally - but probably only once or twice a year, and it doesn’t always settle!

Do you know any fun facts about Milan? Share them in the comments below!