Mince pies is a British treat that has a bit of an odd name – many believe it to be a savory cake, but these days, it’s a fruity, rich delight that people generally enjoy over the Christmas period. Believe it or not, there’s some fascinating history behind these pies – so let’s take a look at a stack of fun facts about mince pies to get you in the festive mood.

1. From savory to sweet!

Once a savory creation containing red meat, festive mince pies are nowadays made with a sweet mincemeat.

A mince pie is sometimes known as a mince tart. Usually measuring up to 2.5 inches, it can be served hot or cold. A sweet interior is shrouded in either flaky, puff or shortcrust pastry.

Traditionally, festive mince pies have connections to the bible and birth of Jesus. Often decorated with a pastry star on top, it represents the star guiding the three kings to Bethlehem. The spices in mince pies represent the gift of spices given to the child Jesus. 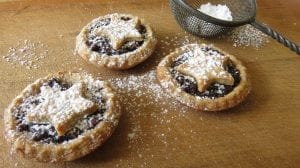 4. Barnsley is the mince pie capital of the planet.

Premier Foods, run by retail bakers Mister Kipling, is the biggest producer of mince pies in the UK. It’s based in Barnsley, South Yorkshire.

2,160 mince pies per minute are produced here – this is when the three production lines work simultaneously!

Other names given to mince pies include crib cakes, mutton cakes, Christmas pies and Shrid pies.

6. Alcohol sometimes finds its way into a mince pie or two.

They have been known to contain a little rum or sherry but are nowadays, more often served with it than have it as an ingredient.

It is believed a recipe for traditional mince pies was brought to England by crusaders in the 13th century.

8. The tastiest jigsaw ever!

Mince pies used to be seen as something of a show of status! They used to be cooked up in the style of a savory puzzle – a tasty jigsaw creation, if you will!

9. The pies formerly known as mutton!

Mince pies used to simply be called mutton pies – as they contained lamb, or sheep meat. 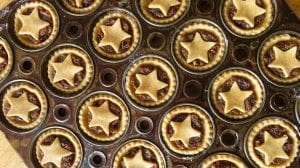 Oliver Cromwell didn’t just ban Christmas in the UK – he banned mince pies, too! He found them to be immoral and representative of Catholicism – thankfully we live in more enlightened times!

Believe it or not, Britain tucks into more than 800 million mince pies over the festive season. Now that’s dedication to sweet treats!

12. Make a wish on your first mince bite!

If you’ve not yet had your first mince pie of the year, be sure to make a wish when you take that first festive bite – it’s a tradition! 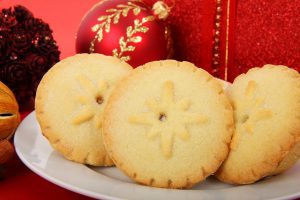 13. There’s been no bigger mince pie!

The biggest mince pie on record – astonishingly – weighed more than 1,000kg – and you can bet it was a British creation, over in Lincolnshire!

Another tradition surrounding mince pies that dates back centuries is to eat one for each of the 12 days of Christmas – worth marking the season with a munch or two, then! 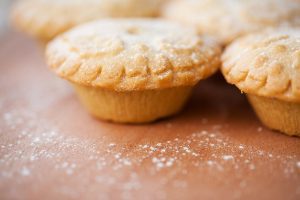 Why is it called mincemeat - there’s no meat?

It’s simply because it used to contain meat - centuries ago. The name has stuck!

Can you buy mince pies all year?

Not usually - but some chains, such as Marks and Spencer, have committed to this in the past!

How many calories are there in a mince pie?

On average, you can expect a mince pie to contain short of 300 calories - before any cream!

Do you know any fun facts about Mince Pies? Share them in the comments below!

This page was last modified on December 26, 2021. Suggest an edit