Holly, ivy, Christmas trees… Mistletoe! As the winter holidays approach, we’ll be seeing more and more of these iconic plants. Mistletoe is known for its romantic traditions when welcomed into our homes, but did you know that it is a parasitic plant and thus not exactly welcomed by its original hosts?

Even though we readily invite it into our homes, we sometimes forget how harmful it can be to trees, and even to ourselves! This plant, which has infiltrated our hearts and holiday spirits, has gained its reputation over centuries, but the science has not since changed. Let’s see if there is anything we can learn about this seemingly harmless flora.

Why do we kiss under it? How has it become such an iconic symbol regardless of its hidden dangerous qualities? Get ready to find out with these 14 fun facts about mistletoe…

1. What’s the official name for Mistletoe?

Mistletoe, also known as an obligate hemiparasite, is in the order Santalales (little name drop of Father Christmas there!)

2. Mistletoe is pretty deadly to other plants.

It is parasitic, and so harmful to its host. It attaches on with its haustorium, allowing it to feed off of the plant or tree that it resides on, funnelling off vital nutrients and water.

Its name is a mixture of Old English, ‘tān’, meaning twig, and ‘mistle’, which is Germanic but of unknown origin, aside from perhaps referring to the word’s roots meaning to ‘urinate’. 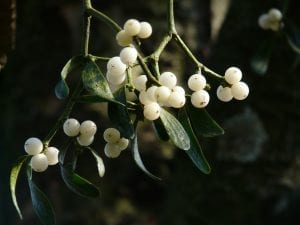 Mistletoe, in its different variations, can be found in the UK, Spain, Portugal, Morocco and southern Africa. One genus, Viscum, which is originally native to the British Isles, was introduced to North America and now lives there quite happily.

5. It’s not just for Christmas.

Mistletoe is evergreen, characterized by year round oval leaves and white waxy berries.

Since the Middle Ages this plant has been associated with fertility and life, as it is evergreen and survives on whilst other plants lose their leaves, and its white berries could be said to resemble semen.

The Romans began the tradition of hanging Mistletoe on doorways, saying it symbolized peace, understanding and love, and also as protection against witches and malevolent demons.

In the Western Christian world, Mistletoe has become a symbol of the winter holidays and is supposed to hang in doorframes, under which passing people are supposed to kiss.

8. Where did that all begin?

The tradition associated with kissing was first made popular by servants during the 18th century, in Victorian England. A man was allowed to kiss any woman who happened to be standing underneath mistletoe! Bad luck was said to befall any woman who refused.

In Norse mythology, the god Balder was said to have been resurrected by mistletoe and then the god Frigg, thus seeing it as a symbol of love, declared that he would kiss anyone who passed beneath it.

9. It’s normally found out in the open.

Mistletoe prefers the branches of hawthorn trees, poplars and lime trees. In the UK the most preferred host of mistletoe is an apple tree! It likes plenty of light so is not often found in a forest. 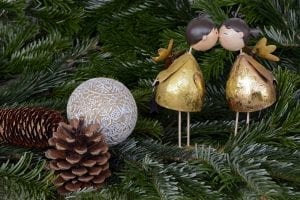 10. Pruning will scale it back.

To prevent mistletoe, one must simply sacrifice the branches where it is living. Either prune smaller branches as soon as signs of mistletoe appear, or in a more advanced stage the branch must be cut off at the trunk.

In its defense, mistletoe has become a vital part of local ecosystems where it is found, many organisms depend on its presence to survive and so it has earned its right to exist.

Thus, mistletoe is actually protected in the UK, the same as any other wild plant, and under the Wildlife and Countryside Act cannot be harvested for your winter decorations willy nilly.

Mistletoe is the county flower of Herefordshire in the UK, and each year Tenbury Wells, in Worcestershire, holds a festival dedicated to mistletoe during which a ‘Mistletoe Queen’ is crowned.

A little further afield, mistletoe has been chosen as the floral emblem for the State of Oklahoma in the US. 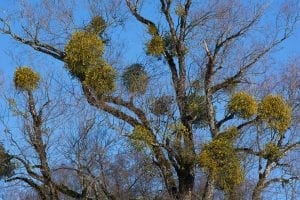 13. Birds help it to propagate.

Birds spread mistletoe seeds, and the sticky film which still surrounds them even after passing through the bird’s digestive system allows them to stick to branches.

Mistletoe is not necessarily deadly when consumed by humans, but it does have some adverse side effects that you would want to avoid (including blurred vision, vomiting and potentially seizures). This also affects certain animals, so keep an eye on your cats and dogs at home.

15. However, it can have medicinal effects.

If handled correctly, mistletoe has been known to have uses for treating certain mental and physical exhaustion symptoms, it can act as a tranquillizer and has been proved to reduce the side effects of chemotherapy, help with whooping cough, gallbladder conditions and more. 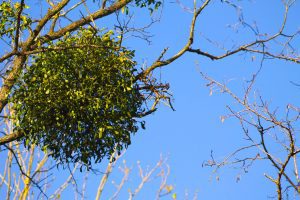 Is mistletoe toxic to touch?

Mistletoe is a toxic plant, so be careful when handling, but if eaten, it will most likely make you ill.

Do I have to remove mistletoe from my trees?

On the whole, healthy trees should be able to survive through mistletoe infestation. However, if you’d rather get it off, make sure to contact a tree surgeon.

Mistletoe is a parasite, meaning that when its seeds land on a tree, it burrows deep and sucks out nutrients.

Do you know any fun facts about mistletoe? Share them in the comments below!