Monkeys are, famously, some of the cheekiest beasts in the animal kingdom. What’s more, they are some of our closest relatives! Therefore, it’s hard not to see some of ourselves in their antics.

But how much do you really think you know about these primates? The fact is, there are many different species – and that’s just for starters. Here’s a stack of fun facts about monkeys to help clue you in.

1.  Monkeys and people are pretty similar!

Monkeys and humans share a lot of characteristics – right down to dental care, it seems! Studies show that some monkeys show their young how to floss their teeth and gums!

2.  We still haven’t discovered all the monkeys on Earth!

There are still monkeys being discovered to this day, with the lesula monkey having been found in Congo DR in 2007.

3.  Monkeys live all over the place!

There are monkeys living in the wild all over the world. However, many specialists group them into ‘old world’ and ‘new world’. Old world monkeys can be found across Asia and Africa, while new world monkeys tend to live in South America. 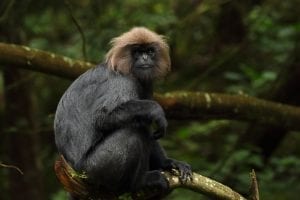 Interestingly, old world monkeys tend to show specific behavioral traits and characteristics. For example, they never hang in trees, and have pointier noses than their new world counterparts.

Believe it or not, apes are completely separate from monkeys. Apes tend to be more intelligent and are found in areas separate to monkeys – there are no apes to be found in North America, for example.

6.  The mandrill is a massive monkey

The largest type of monkey is the mandrill, which can weigh up to 35kg when fully grown. Mandrills, too, are notable for their fangs – they are longer than a lion’s!

7.  There are probably more monkey species out there than you think

All in all, there are currently thought to be 264 different monkey species across the globe.

8.  Some monkeys are amazingly spry!

The patas monkey is certainly speedy on its feet – it can travel up to 34 miles per hour!

9.  Only one new world monkey sleeps during the day

The only nocturnal new world monkeys are referred to as the owl monkey. The owl monkey also seems to be fairly uncommon in that it neither suffers from nor carries malaria, a disease commonly found in primates such as monkeys. 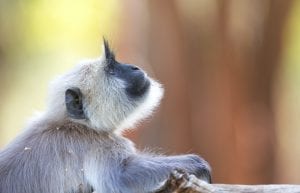 10.  Europe only has one wild monkey breed

The Barbary macaque is unique in that it can be found in the wild in Gibraltar, making it the only monkey native to Europe.

However, you also won’t find monkeys in Antarctica or Australia.

There are various collective nouns for monkeys, including tribes, barrels and troops.

12.  Almost all monkeys have tails

It’s rare you will find a monkey without a tail, though the aforementioned Barbary macaque is an example. 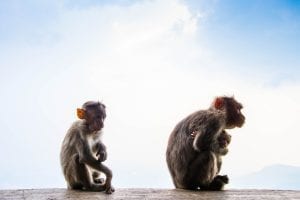 13.  Some monkeys learn to remember each other

Squirrel monkeys are interesting in that they will choose to mark themselves to identify each other, much as how we might do the same at work!

14.  We get some hygiene habits from monkeys!

Believe it or not, it wasn’t popular to wash dirt off potatoes until we started noticing monkeys doing so in the 1940s.

15.  Not all monkeys can see color

A monkey’s ability to see color will vary depending on species, though old world monkeys will largely see full color – and new world monkeys often struggle. There are some new worlders which can, but it’s certainly not a widespread trait.

Monkeys will likely eat bananas if they come across them, but they have a diet rich in vegetation, nuts and more besides.

What makes a good pet monkey?

Generally, it’s advisable to not keep a monkey as a pet - they can be erratic, and domesticating them may not be considered kind.

Yes! On the whole, they trust each other and stick by their partners.

Do you know any fun facts about monkeys? Share them in the comments below!

Are you fascinated with primates? Check out these super facts about spider monkeys, these crazy facts about chimpanzees or these great facts about silverback gorillas!