Ever been to Mont St Michel on vacation before? It’s famous for being a wonderful island with a gorgeous coastline, intriguing history, and brimming with European culture and class. Before you plan a visit, however, this curious location is perhaps a little different to some of the sunny isles you’ve vacationed at elsewhere. Here’s some fun facts about Mont St Michel to help clue you in.

1. Where is Mont St Michel?

Mont St.Michel is an island community situated off the north west coast of France. In fact, it’s absolutely tiny – it’s regarded as a floating village community in some respects!

2. It doesn’t take long to traverse.

Walking cross-isle takes up to approximately 50 minutes, allowing a few moments for photo opportunities! Some people manage to walk to the island in half an hour! 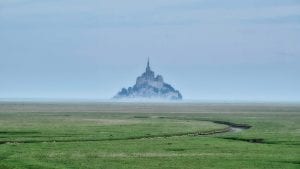 3. Why not travel by carriage?

A shuttle bus takes approximately 12 minutes from the mainland car park to the main stopping point on the island. A popular and quaint way to travel is by the traditional ‘maringote’! This is a horse drawn carriage – and the journey takes 20 minutes.

Mont St Michel is absolutely minute – it’s only 7 hectares or around 17 acres large! Some people have larger gardens than the whole of this space! 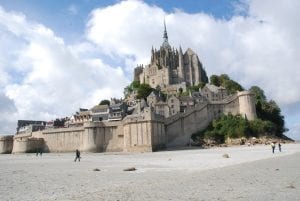 5. But, it welcomes lots of visitors!

Around 2.5 million people visit Mont St Michel every year – but getting to it can be a bit of a pain!

Mont St Michel is home to very few people. In fact, its population never seems to rise much higher than 50 citizens at any given time. That’s including the population of monks and nuns at the famous abbey, too!

7. The abbey was once used as a jail of sorts.

During the French Revolution in the 18th century, monks left the abbey and prisoners were taken there instead. The prison closed in 1863.

Mont St Michel was chosen to become a prison due to its secure location, having only one point of access on and off the island. Surrounded by tidal waters with strong currents, it was considered super-secure!

Mont St Michel’s nickname may not sound too flattering, but it’s actually pretty impressive. It alludes to the dangerous tides that can affect transport to and from the island as well as sailing nearby. The tides around Mont St Michel are the highest in Europe – they can reach approximately 14 meters high! 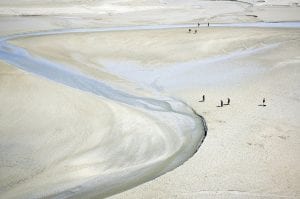 9. It inspired a remake!

William the Conqueror, Duke of Normandy, was so impressed by this island construction that he built a replica. Known as Saint Michael’s Mount of Penzance, his ‘copy’ is situated in Cornwall, in the English Channel.

10. It’s been recognized by UNESCO, too.

Mont St Michel has been a protected historic site since 1862. In 1979, it became an official UNESCO World Heritage Site. 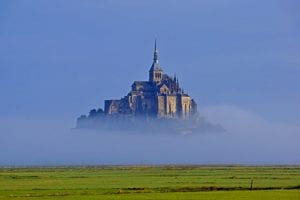 11. However, it may not be with us for much longer.

In 2006, it was reported that Mont Saint Michel is sinking. It was predicted that by 2046, it may not continue to exist as an island. Visit now while you still can!

Mont St Michel is world famous for its imposing Gothic architecture, which has been photographed and filmed extensively. The large Benedictine Abbey is just one example of the Gothic buildings here! It has welcomed the return of monks and nuns from 2001 onwards – and from the Monastic Fraternity of Jerusalem, they run the abbey and coordinate daily services. 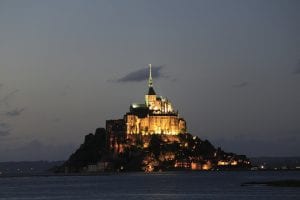 When did construction on Mont St. Michel begin?

Mont St Michel is said to have been built as a community all the way back in the 8th century, around 708 AD.

How many years did it take to complete construction on Mont St Michel?

Who is responsible for the construction of Mont St Michel?

The Bishop of Avranches, Saint Aubert, is believed to have had a vision prompting him to create Mont St.Michel. The archangel St Michael inspired this task by appearing as a vision to him!

Do you know any interesting facts about Mont St. Michel? Share them in the comments below!