Mount Vesuvius is world-famous for a variety of reasons.  Not only is it an active volcano that’s fairly large compared to the mainstream, it’s also been a part of the landscape for centuries, even millennia.  How much do you really know about this volcano?  Here’s 12 fun facts about Mount Vesuvius to help freshen your memory.

1.    Vesuvius is unique on the continent.

Mount Vesuvius remains, at present, the only volcano on the European mainland to be active, sitting on the Midwest coast of Italy.

In fact, Mount Vesuvius is more than one peak, technically. It’s made up of another mountain, Somma.  The fact that the two are so close together is likely why they both group into the name Mount Vesuvius.

While the volcano may be active, it has only erupted intensively around eight times in the past 17,000 years. Those aren’t bad odds – but remember that it famously left cities such as Pompeii to burn in 79 AD.

Pompeii with Mount Vesuvius in the background

4.    The effects of a Vesuvius eruption can be devastating.

In fact, an eruption from Mount Vesuvius is said to last quite a long time. Though we obviously don’t know the full ins and outs, historians are able to suggest that the Pompeii eruption lasted for a full 24 hours.

Mount Vesuvius hasn’t seriously erupted since 1944. However, before that, it was thought to blow up once every 20 years.

It was at this time that Mount Vesuvius erupted during the Second World War, in March 1944. Around 26 civilians were killed in the disaster, displacing around 12,000 people in the process.

However, this particular eruption also managed to wipe out several aircraft, numbering around 80, which were based at an airfield stationed in Pompeii.

Stunningly, it’s thought that a lot of ancient Pompeii was actually buried neatly under the ash the volcanic eruption delivered. To this day, historians and archaeologists are still finding evidence from the ancient disaster.

You’ll actually be able to take a look around the ruins of the city, too, which are carefully preserved. It’s fascinating to see what has been left behind!

Anyone worrying about the current state of Mount Vesuvius will be pleased to know that there are systems in place to help predict future disasters. It is thought that scientists will be able to send out warnings up to three weeks before it is due to erupt again.

Mount Vesuvius is technically a stratovolcano. This means that it is made up of several geologic layers, such as ash, lava and pumice.  It is a composite volcano of sorts. 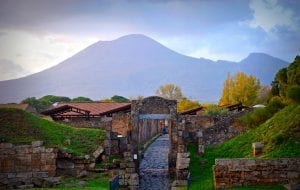 Mount Vesuvius is not the only mountain or volcano in the region, as there is also Campi Flegeri, Stromboli and Vulcano nearby.

11. Mount Vesuvius is a tourist attraction!

Believe it or not, thousands of people visit a full national park which surrounds Mount Vesuvius. This area allows you to walk up a trail leading towards the main crater.  Therefore – at least for now – heading up to Mount Vesuvius by foot is thought to be completely safe!

What caused Mount Vesuvius to erupt?

It’s thought the Pompeii disaster was caused by tectonic plates across Africa and Eurasia colliding.

Is Mount Vesuvius in the Ring of Fire?

No - it’s nowhere near! However, it’s one of few volcanoes outside of the region that are just as dangerous.

What were the long term effects of Vesuvius’ biggest eruption?

As well as helping to bury Pompeii, the eruption of Mount Vesuvius also caused serious pollution, and killed much plant life far and wide.

Do you know any interesting facts about Mount Vesuvius?  Share them in the comments below!

Are you fascinated with mountains? Check out these fun facts about Mount Everest…