Situated on the Gulf of Naples, on the western coast of southern Italy, Naples is the regional capital of Campania and the third-largest municipality in Italy, after Rome and Milan.

If you want to take a glimpse into Naples’ rich history, beautiful sights, or taste the unique food Neapolitans enjoy every day, start planning your trip today! But before you pack your bags, let’s listen to the timeless ‘O Sole Mio’ and enjoy this stack of fun facts about Naples…

1. How big is Naples, actually?

The city covers a total area of 119 square kilometers (46 square miles) with a population of around 1 million.

The name of the city comes from ancient Greek Νεάπολις, or Neapolis meaning “New City”.

3. The Greeks got here first.

First settled by the Greeks in the second millennium BC, Naples is one of the oldest continuously inhabited urban areas in the world. 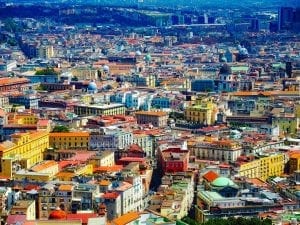 4. It rises from the depths!

The city is situated between two areas of volcanic activity: Mount Vesuvius (the volcano that erupted in 79 AD and destroyed the city of Pompeii and Herculaneum) to the east and the Campi Flegrei (Phlegraean Fields) to the northwest.

The most recent eruption of Vesuvius occurred in 1944.

7. The Romans made a big deal out of Naples.

When the city became part of the Roman Republic in the central province of the Empire, it was a major cultural centre.

Naples is a microcosm of European history because it saw several civilizations come and go, each leaving traces in its art and architecture.

Between 1925 and 1936, Naples was expanded and upgraded by Benito Mussolini’s government.

9. However, much of that work fell during bombings. 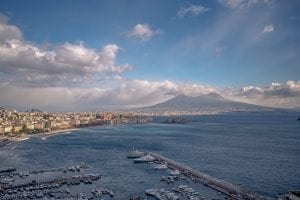 Naples’ historic city centre is the largest in Europe and a UNESCO World Heritage Site.

11. What’s the main square in the city called?

The Piazza del Plebiscito is the city’s main square. It is named after the plebiscite taken on 2nd October, 1860, that brought Naples into the unified Kingdom of Italy under the House of Savoy, the royal dynasty that was established in 1003 in the historical Savoy region.

12. There are dragon eggs here… supposedly!

The magnificent Castel dell’ Ovo is located directly on the sea. It’s a beautiful place to explore. It’s called “Egg’s Castle” because there is a legend that tells about a Dragon’s eggs hidden in the dungeons of the castle. The area is windy, so take a jacket! 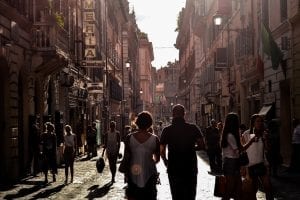 13. There are amazing sights from castle turrets.

Castel Sant’Elmo is the highest castle in the city. From there you can see the entire city and take amazing photos. The museum “Certosa“, near the castle, often hosts wonderful art exhibitions.

14. The castles keep on coming!

Castel Nuovo is a medieval castle located in front of Piazza Municipio and the city hall in central Naples. Founded in 1279 it’s one of the main architectural landmarks of the city. It was a royal seat for kings of Naples, Aragon, and Spain until 1815.

15. One castle stands the proudest.

Probably the most famous castle in the city is Maschio Angioino. It was built by Carlo d’Angiò in 1282. The castle is magnificent and has a panoramic view of the Gulf of Naples. 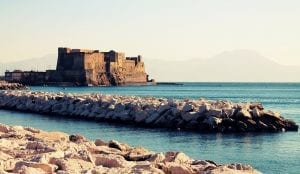 The National Archaeological Museum of Naples is an important Italian archaeological museum. Its collection includes works from Greek, Roman, and Renaissance times, and many Roman artifacts from nearby Pompeii, Stabiae, and Herculaneum.

The chapel Cappella Sansevero, also known as the Chapel of Santa Maria della Pietà is located in the centre of Naples. It contains works of art by some of the leading Italian artists of the 18th Century.

18. Ever visited the Valley of the Dead?

The Catacombs of San Gennaro sometimes called the “Valley of the Dead” are underground paleo-Christian burial and worship sites in Naples, carved out of tuff, a porous stone. Situated in the northern part of the city they’re consisted out of two levels, San Gennaro Superiore, and San Gennaro Inferiore. 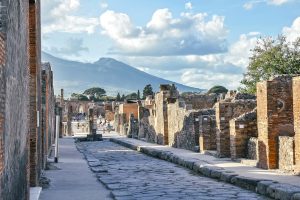 Naples has numerous higher education institutes and research centers. It’s the home of what is thought to be the oldest state university in the world, the University of Naples Federico II, which was founded by Frederick II in 1224.

Feeling hungry from all that sightseeing? Try one of the most famous pizzas Margherita created in Naples and named after Queen Margherita Teresa Giovanni, following her visit to Naples in 1889. The Italian flag colors represented this patriotic pizza: basil for the green, cheese for the white, and tomato sauce for the red.

The Pizza fest, also known as Pizza Village, happens every year, and it’s the largest celebration of pizza in the world, sometimes with more than 1 million visitors!

Naples is the place to go if you’re a food lover. It’s the Italian city with the most Michelin Star restaurants, 17 of them currently. 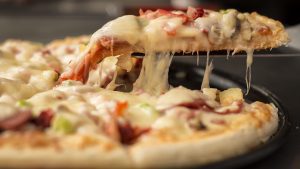 If you’re more into straight shots of coffee, you might be pleased to find out that the traditional Neapolitan flip coffee pot (known as the cuccuma or the cuccumella) was the basis for the invention of the espresso machine.

Is Naples a safe city to visit?

On the whole, Naples is fairly safe to visit - it’s rated safer than Rome, for example - but keep a close eye on your possessions just in case.

Is Naples cheap to visit?

Naples is generally cheaper to visit than many Italian cities - especially Rome - so you might be surprised.

How much money am I likely to spend per day in Naples?

On the whole, you can expect to spend around $120 a day in Naples - so start saving!

Do you know any fun facts about Naples ?  Share them in the comments below!