Ostriches are truly odd birds indeed! Curious creatures, these flightless avians are fast and formidable and you certainly wouldn’t ever want to pick a fight with one! They are some of the most fascinating creatures around – not only in the bird kingdom! Let’s take a look at a few fun facts about ostriches that are likely to surprise you.

The ostrich is the largest bird on the planet by a fair margin. It’s one of several reasons why they can’t fly!

However, despite their bulk, and their inability to take to the sky, they make up for things by being incredibly speedy on the ground. They can run at a pace of over 40mph, which means that you’re never going to outpace one on foot.

Ostriches are incredibly territorial. Male birds will often headbutt each other in fights over females. Fights won’t last long on the whole, but they are often fatal – to the victor go the spoils! 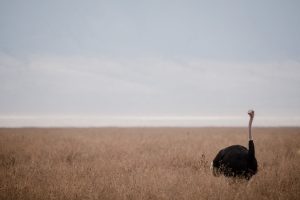 4. If you go down to the woods today…

Ostriches are commonly found across hot and dry regions in Africa. However, you’re likely to find them in woodland as well as in desert areas.

5. We weren’t kidding about their size.

You can find ostriches which grow to be nine feet tall! They can also weigh up to more than 300lbs on average, meaning that as well as being fleet of foot, they stand a chance of overpowering you if you let them!

Ostriches have a varied diet on the whole. They will eat plants and meat, with snakes and rats likely to make up the bulk of their diet. However, they will also eat sand and small stones occasionally to help aid digestion.

These bulky birds will also withstand not having to drink water for days at a time. This means that they are ideal for withstanding the heat. However, an ostrich will often enjoy taking a bath or two in water if available!

8. Ostrich eggs are a big deal.

As well as being the biggest birds on the planet, they naturally lay the biggest eggs! Ostrich eggs can measure up to 15cm. However, believe it or not, relative to the size of the layer, it’s the smallest egg in terms of bird-to-egg ratio. Ostriches really are that big!

9. Ostriches are threatened – to an extent.

Sadly, ostrich numbers continue to deplete in the wild. You will likely find many of the birds in captivity in the modern age.

That said, their conservation status is not, at this point, particularly concerning to projects and bodies worldwide. 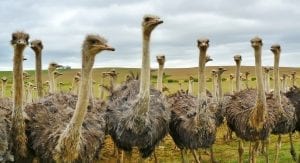 10. Would you ever tangle with an ostrich?

striches are well-equipped when it comes to dealing with predators. These flightless birds could make a decent meal for big cats – but a powerful enough kick from an ostrich could kill instantly. They’re also equipped with extremely sharp claws despite only having four toes!

It’s a common myth that ostriches will bury their heads in the sand. While they will often lie low to try and avoid predator attacks, ostriches are never known to actually bury down in practice. Quite where this misnomer started is a bit of a mystery! 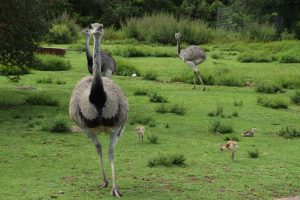 Not usually - they can be territorial, mind! Some evidence suggests prehistoric forerunners to ostriches may have been potential mammal-eaters.

Not on the whole - but at this size and speed, does it matter? They have incredible eyesight, too, which means they are amazingly well-equipped otherwise.

Can an ostrich run faster than a cheetah?

What is a group of ostriches called?

Like most bird species, a group of ostriches is called a flock.

Do you know any fun facts about ostriches?  Share them in the comments below!

This page was last modified on December 26, 2021. Suggest an edit