Owls are some of the most fascinating birds of prey in the wild today – there are plenty of varieties, but the majority of them are truly unmistakable – those big eyes, that incredible swivelling head!

The wise old owl is native to various continents, and it remains one of the most interesting avians easy to spot right now. How much do you think you know about these birds? Time to wise up and read through these fun facts about owls for the full lowdown.

1. Rethink everything you know about owl vision.

Owls are far-sighted, and their eyes aren’t round – they’re tube-shaped! Yes, believe it or not, an owl’s eyes actually extend right the way back into their heads.

This is for a very cunning evolutionary reason – it allows them to move their heads at incredible degrees and angles.

2. Owls won’t be able to see much in front of them.

As they are far-sighted, it is often hard for an owl to see anything close-up. This means that their other senses are heightened, too, meaning that they have incredible hearing. That’s boosted by varying ear levels in their heads – and flat faces – believe it or not!

3. Some owls have spiky dens!

There’s a species of owl which burrows its nest into cacti. Specifically, we are talking about the slightly odd elf owl, which you’ll find across the US into Mexico. The elf owl is well-known for stealing away into a variety of holes and spaces, meaning it’s really not fussed about where it gets to sleep. 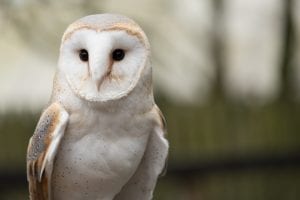 Sadly, around a third of all owl species in the world are considered at risk. This means that many species, across the UK and beyond, are fiercely protected.

5. Some owls are amazing hunters!

The hawk owl is one of the most intense hunters throughout the species, with the incredible ability to spot prey up to 12 inches beneath snowfall. How does it do this? Through hearing alone?

6. Sizes differ between the genders.

It’s not unheard of for female owls to be larger than males, in fact, it’s fairly common.

Owls are also able to turn their heads an incredible 270 degrees thanks to the sheer number of vertebrae they possess. Your average owl will boast around double the vertebrae of other bird species.

Believe it or not, some owls are known to hunt each other. In particular, the great horned owl is likely to prey on the barred owl due to their difference in size.

9. Owls make all kinds of noises.

Owls are generally known for hooting, however, some hiss, and others make strange sawing noises. In fact, owls are known for making pretty haunting and sometimes frightening sounds! 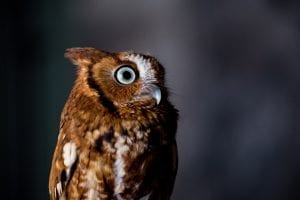 It’s a misconception that all owls are nocturnal. In fact, many will actually choose to hunt and hoot during daylight hours.

11. Owls are perceived to be very clever!

Owls are seen by many as figures of great knowledge and wisdom. The Egyptians, for example, believed that owls would guide people into the afterlife. The Wardaman tribe, too, believes that an owl is responsible for having created the world.

However, South African people see owls as bad luck symbols. This is to such an extent that calling someone an owl in South Africa is a huge insult. So don’t try it! 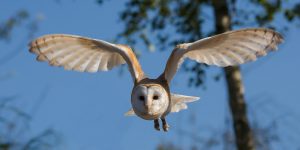 A Barn Owl in Flight

Barn owls aren’t likely to make great dinner party guests. They don’t chew their prey. They swallow whole, which includes all the bones and all the cartilage along the way.

In fact, the average barn owl is a voracious feeder, known to gulp down more than a thousand mice each year.

14. Owls will avoid water wherever possible.

Owls are able to swim, but they are at their weakest in water, as they are completely defenseless. Owls are fantastic at striking from above, not from below. Therefore, it’s rare you will see an owl intentionally popping in for a dip.

The collective noun for a group of owls is a parliament. 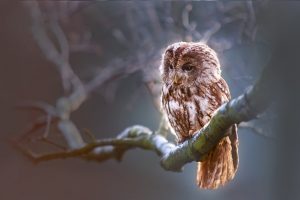 Owls are amongst the stealthiest of bird predators, with flight action that is notoriously quiet. It’s another reason why they are some of the most successful avian hunters around the globe.

17. Owls are also relied upon when culling vermin.

Many farmers rely on owls to keep rodent populations down. As owls are generally so good at hunting for mice and small rodents, farms are known to set up families of owls to reduce crop damage. It’s cheaper and more humane than using chemicals and helps to keep the food chain running. 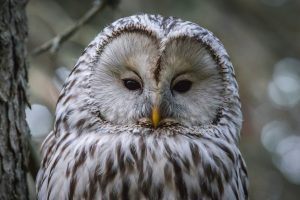 How many species of owl are there in the UK?

There are five main species - the Tawny, the Little, the Short Eared, Long Eared and Barn owls. However, there are - very rarely - Eagle owls, which number no more than 40.

Are all owls carnivores?

Yes - they are all birds of prey - and believe it or not, they store their meat in ‘pantries’ to let it mature!

What are owls afraid of?

Owls may be fierce beasts at heart, but they absolutely hate loud noises!

Do you know any fun facts about owls?  Share them in the comments below!