Pangolins are some of the most fascinating animals on the planet! With their scaly skin, long faces, and mysterious ‘powers’, they are some of the most coveted creatures on Earth. Sadly, their popularity in illegal trade has led to drastic decreases in their numbers, making them a genuinely endangered species. So, let’s get to know these interesting creatures better together – here are some fun facts about pangolins.

Despite having scales, pangolins are actually mammals! In fact, they are the only mammals in the world to be completely covered in scales! They are often likened to artichokes due to their scales resembling the vegetable’s leaves in shape.

2. Where to find pangolins…

If you’d like to see a pangolin in the wild, then you’ll have to head to either the wilds of Asia or Africa. They are usually found close to the water but love sandy areas, wooded areas, and savannas.

Pangolins do indeed eat ants! Like anteaters, they also eat termites by unfolding their very long tongues (that can almost reach the same length as their bodies!). They are, in fact, known as scaly anteaters and are a part of the Pholidota family. 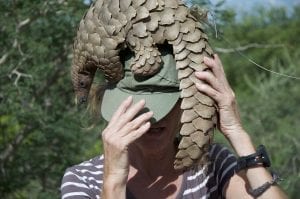 4. There are eight species!

Today, there are eight species of pangolins alive, with four of them living in Asia. Sadly, all eight pangolin species are listed as being under threat of extinction.

5. Humans are their main predators.

Sadly, humans are predominantly to blame for the small numbers of pangolins. They are commonly killed in poaching, illegal hunting, and for trade. Their scales, however, help to protect them from a great number of animal species.

6. What are the pangolin’s scales made of?

Their scales are made of keratin. If the name sounds familiar, it’s because keratin is also what makes up our own fingernails and toenails!

7. How big are pangolins?

Pangolins can grow to be about the size of a pretty big house cat. They can also reach up to about four feet in length!

In the pangolin world, the males are seen at home even more than the women! In fact, males often stay to protect their young until they reach independence. Now those are good dads!

9. Pangolin trafficking is a problem.

Pangolins are sadly known for being the most trafficked animals in the world. They are quickly followed by antelopes. 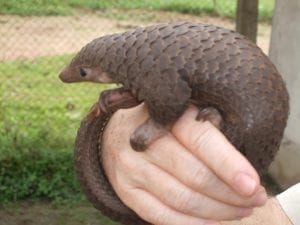 When pangolins are feeling threatened, they curl up into tight balls! Then, all their predators can see are still balls of scales – not very appetizing!

Do not be afraid of ever being bitten by a pangolin as they have no teeth! To be fair, with tongues like that, who needs teeth?

12. How long do pangolins live?

When kept healthy and happy in captivity, pangolins can live to be about 20 years old. Sadly, in the wild, due to illegal hunting, poaching, and the destruction of their homes, pangolins are far less likely to live long lives. 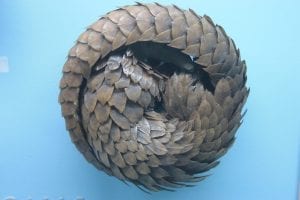 What are pangolins killed for?

Sadly, no, pangolins are not bulletproof. While some claim that bullets will ricochet off of their scales, that is not the case. Their scales are very strong - but not strong enough!

No, pangolins do not lay eggs. The females usually give birth to one, two, or three pangolins about once a year.

Do you know any interesting facts about pangolins? Share them in the comments below!

This page was last modified on November 2, 2022. Suggest an edit