Polly want a cracker? Parrots are amazingly intelligent animals that are perhaps most famous for their colorful plumages and their ability to mimic all kinds of sounds. However, that’s not everything in their repertoire! Here are some fun facts about parrots worth squawking about!

Psittacines is another name for parrots! There are 398 species of them, divided into 92 genera.

Parrots are very popular as pets! In the USA, pet parrots come in fourth place after dogs and cats and fish in terms of popularity.

3. They are fantastic companions.

Parrots are popular pets for numerous reasons. They are colorful and smart and can easily be taught to say words and/or mimic sounds! They are also pretty easy to keep and affordable to look after. 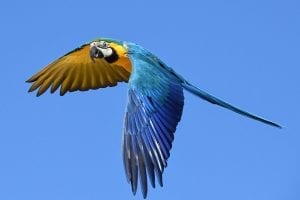 Different parrots have varying life expectancies both in the wild and in captivity. Cockatoos are known to live for between 40 and 60 years. Kakapo, meanwhile, live from 40 to 80 years. A famous Macaw called ‘Hyacinth’, too, lived until around the age of 50 – great news for pet owners!

5. Parrots can be pack animals.

Generally, parrots live in flocks of around 30 – meaning that they are fantastically social beasts! It’s often considered cruel to try and force a parrot to live on their own as pets – so do try and get them a friend if you want them to avoid loneliness.

In their natural habitat parrots usually live in warm tropical or subtropical zones – and obviously, parrots in captivity are happiest in habitats most resembling how they would live in the wild. Some do prefer cooler climates, though – for example, in New Zealand, the kea is known to live in alpine areas.

7. Parrots are in danger.

Tragically, some parrots are at risk of extinction. This is primarily due to the destruction of their natural habitats. Up to one third of the parrots alive today are threatened.

African grey parrots are one species of parrot particularly at risk of extinction. Logging in Ghana has destroyed 99 percent of the population of these lovely birds.

Parrots use their feet for climbing. They have an especially strong grip and can hold onto branches as well as use claws to anchor themselves along tree trunks.

Domestic parrots often spend hours on perches – they don’t usually fall off even if they fall asleep because their feet are positioned to hold their legs and bodies in place!

Parrots grasp food with their claws and some use their feet to burrow into soil, finding insects to eat or even preparing ground to lay their eggs – they’re the Swiss Army knife of birds! 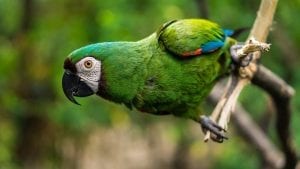 Yes – some parrots are monogamous. Once mating has occurred, some parrot parents take equal responsibility to guard eggs and raise chicks.

11. In some cases, people eat parrots.

Parrots are often eaten by humans living in and around the Amazon rainforest. Conservation data for that region suggests that approximately only 7,000 yellow headed parrots live there currently, with numbers dwindling.

12. The Guinness Puck of Records!

Puck is the name of a blue parakeet who set a record in the Guinness Book of Records. In 1995, he was recorded for recognizing an amazing 1,728 words! 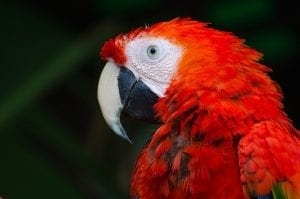 Does it hurt when a parrot bites you?

Yes! Parrot bites can really pack a sting - and not only that, you can even risk losing a finger or two to severe parrot bites. Treat them with care!

Why do parrots vomit on their owners?

It’s a show of affection! Yes - if your parrot chooses to regurgitate on you, it genuinely loves you - as this is the behavior they show towards their young. Sweet, but gross!

Do parrots cope well on their own?

Unfortunately, parrots are not known for coping well when separated - whether from other birds, or from their owners. Therefore, some may even scream if you leave the room! Thankfully, there are ways you can carefully train your parrot to help their anxiety.

Do you know any fun facts about parrots? Share them in the comments below!