You will probably have heard of Petra before, or perhaps heard of it under one of its many iconic names: the Lost City, the City of the Dead, the Rose City…

Hidden in the mountainous desert in Southern Jordan, the ruins of this ancient city tell the story of the Nabatean people, a lost civilisation only to be discovered thousands of years after it was built, in the 3rd century BC. It remains a mystery and archaeological excavations are ongoing, constantly teaching us more about who lived there, how they built such a complex honeycomb of temples and tombs into the stone, and what happened to them.

Whether you have a fascination for extinct ancient civilisations, or you are deciding on where to go on holiday next, then you are in the right place! Let us explore the ruins of this magnificent forgotten city, and learn more about the people who built and inhabited it.

Whilst this name is dramatic and adds a certain mystery to Petra, the city was actually much more a city for the living! Petra was a wealthy and bustling city in its prime, at its peak it had around 20,000 inhabitants.

The blushing pink hue of Petra comes from the type of stone that it was built into; limestone. Hence it’s more romantic nickname!

Amongst the objects and artefacts found in Petra are sculptures and statues, intricately crafted pottery, fabulous jewellery and much more hidden amongst the ruins of the temples and tombs. However much of the treasure had already been looted over the years before archaeologists were able to set foot there. 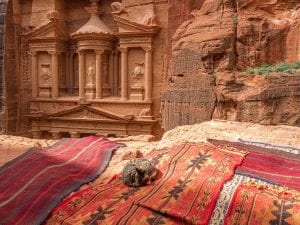 The entrance into Petra is not free, however it is better value to stay longer: a ticket to spend one day there is JD50 (around £50), a two-day ticket is JD55, and a three-day ticket only JD60! Children under 15 do not need to pay for entry.

5. Once upon a time, there was a stone city in a green oasis

The Nabataeans, the builders and inhabitants of Petra, also built an intricate water pipe system so supply water to the city, it even had ponds! The Ain Mousa spring was their main source of the precious liquid.

They worshipped many gods such as Isis and Baalshamin, Greek gods and Roman gods like Dionysus, and they worshipped at temples and made sacrifices. Their supreme god was Dushara, “Lord of the Mountain”.

7. The danger of flash floods in the desert

Petra was often subject to and damaged by flash floods, however the old dams built by the Nabateans were restored to divert the water away after some French tourists drowned in the late 1960s.

Johann Ludwig, a 27 year old Swiss explorer rediscovered Petra about 200 years ago, in 1812.

9. Petra is one of the 7 Wonders of the World

This almost perfectly preserved city, carved straight into the mountains, more than deserves this honor. Marking the great achievements of the Nabatean Arabs, and conserving their ancient cultural heritage. 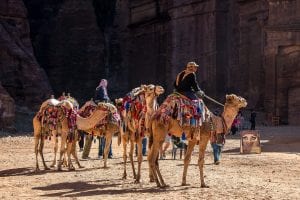 From the Bdoul tribe, a handful of bedouins still remain and live in and around the historic ruins of Petra, inhabiting some of the smaller tombs and caves.

11. It has also made its mark on Hollywood

You may recognise Petra’s famous facades from when they were featured in modern movies like Indiana Jones! Indiana, on a mission to find the Holy Grail, was told it could be found hidden in the Al Khazneh, or “The Treasury”, of course!

12. The Al Khazneh, but why is it also known as the Treasury?

Dating back to the first century AD, this is the most famous and recognisable site in Petra, however we now know that it is in fact a royal tomb or temple. Alas, that has not stopped looters from trying to find hidden treasure within, as can be deduced by bullet holes in the famous ‘urn’ at the top of the Treasury. You cannot enter into the Al Khazneh. 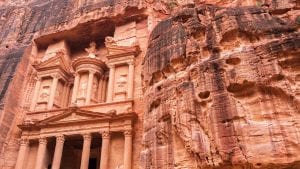 13. The stuff of legends

One story tells that the Egyptian Pharaoh escaped the closing of the Red Sea, along with a portion of his army, and then he magically created the Khazneh to store his treasure while they continued on the hunt for Moses.

14. The Siq, meaning canyon in Arabic: the road through Petra

The Siq is how one walks through to the main monuments of Petra, it is about a 1.5 mile walk in a narrow and curving canyon, from where the Visitor’s Center now resides all the way to the Treasury.

The Theatre is another sign of the presence of an advanced and interesting culture, massive and built into the stone just like the rest of the city, is a sight to behold. It can fit around 8500 people, and resembles a Roman theatre with a similar acoustic enhancing architectural design. 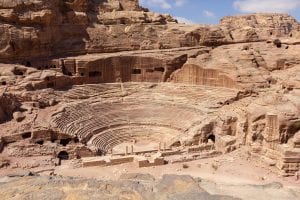 You are allowed to enter into the Palace Tomb, and witness the graves carved into the walls. The Royal Tombs can be viewed from outside; a row of larger tombs with beautiful and intricate facades which are carved into the rock. The Obelisk Tomb, which is believed to have 5 people buried inside, and a larger hall underneath which is though to have held feasts to honor the dead.

The Colonnaded Street, one of the main shopping streets in Petra’s heyday, was the heart of the city. There are homes lining it, signs of markets being held there, and there was once even a public fountain for the inhabitants to use.

18. A modern and thriving people

Following the Colonnaded Street you will find the Great Temple, though it is thought to have actually been a sort of senate hall, where the ancient Nabataean government would have assembled.

19. The changing of the times

Near the Great Temple across the Colonnaded Street, is a path to the Byzantine Church, built from the ruins left by an earthquake. It was built in 450AD, and evidence of a baptismal tank can be found within, as well as the remnants of two impressive mosaic aisles, depicting scenes of mythological animals and tales of the people who lived there. There was also a large amount of burnt scrolls in a room in the Church. 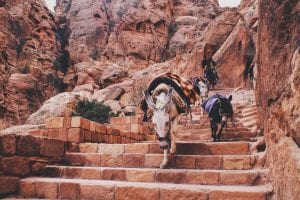 20. The Castle of the Pharaohs daughter – like something out of a fairytale!

Further along the path is Qasr al-Bint, which translates to the Castle of the Pharaohs Daughter, it is the main temple of Petra.

After all these sites, the last main one is the Monastery, called Ad-Deir, and it is situated 850 steps high. The furthest from the main entrance, but well worth the walk. However, it is now known that it was once used as a church and was never actually a monastery, it was only called one because of the crosses found in the central hall.

22. Once vibrant and colorful

It is known today that the city of Petra was once colorfully and intricately painted. This can still be imagined by looking in a few rare places in Petra today, like on the painted ceiling of one small tomb (one with a stone staircase at the entrance, opposite the restaurant “Basin”, this monument is not well known to visitors).

23. What of the Nabataeans, the people of Petra?

They were described as independent and noble, and Petra was an important commercial hub, however Petra and its people were annexed into the Roman Empire in 106 AC and later converted to Christianity.

24. Petra, built from top to bottom

Petra was not actually built, rather yet it was carved, carved directly into the mountain! Study and research by archaeologists shows that it was built from top to bottom, using the upper carved stones as ramps for people to stand on whilst working.

25. Petra was mentioned in the Bible

Sela, which means rock in Hebrew and is a geographical name, is mentioned numerous times in the Hebrew Bible. 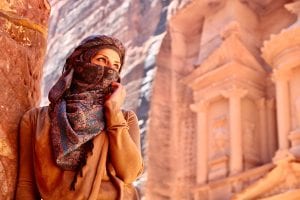 As Petra is in Jordan, which is a predominantly muslim country, if you are planning a trip to the famous ruins, it is advised to dress modesty. To exercise respect, and also to protect yourself from the scorching sun!

The remaining inhabitants, like the Bedouin tribes aforementioned, rely heavily, if not solely, upon tourism for their income.

Tourists are greatly respected, as is the site itself, and the community wish to ensure a safe and enjoyable visit for all. All tour groups to Petra are accompanied by tourism police.

29. What has happened to Petra during the pandemic?

Today, the Jordanian government have planned and authorised further excavations in and around Petra, making most of the recent decrease in tourists due to the Covid-19 pandemic. Jordan’s tourism economy relies heavily on visitors’ interest in Petra.

Why is Petra called the Lost City?

Petra gets its nickname as it was actually discovered under tons of sand layers - it was effectively buried!

What did the people of Petra eat?

The people of Petra City are thought to have thrived on wheat, local animal meat and plants.

When is Petra said to have been destroyed?

Petra is thought to have been destroyed as early as 363 AD - that’s an estimate, of course!

Do you know any fun facts about Petra? Share them here in the comments below!