Pigeons – they get a bad rap! These misunderstood avians are actually more fascinating than many people give them credit for being. In fact, let’s take a look at some fun facts about pigeons – don’t get in a flap!

Pigeons can actually recognize themselves in the mirror, something only a few animals can do – and tests have even shown that they can recognize the alphabet, too. Amazing stuff!

Pigeons have been bred for a long time. In fact, it’s been a hobby for many people in England since the Victorian Age. Someone who looks after pigeons for fun is generally known as a ‘pigeon fancier’ in the UK!

There’s probably no bigger pigeon fancier than Charles Darwin, author of On The Origin of Species. The naturalist actually joined a number of pigeon fan clubs and kept his own flock – and wrote two chapters on the birds in his tome The Variation of Animals and Plants Under Domestication. 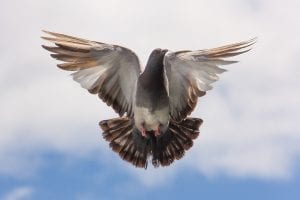 4. We needed pigeons in WWI and WWII.

One pigeon, known as Cher Ami, actually helped to save 194 soldiers stranded at war during the final days of conflict in WWI.

5. They’ve been on the big screen.

There’s even an animated movie that celebrates wartime pigeons – Valiant – featuring the voices of Ewan McGregor and Ricky Gervais.

6. Tesla adored his pigeons and even helped some.

Darwin wasn’t the sole pigeon fancier who also happened to be a bit of a legend from times gone by. Nikola Tesla, the incredible inventor, actually helped to tend to injured pigeons while staying in a hotel in New York City.

Pigeons love to flock together. In fact, you’ll probably find they band together in big groups of up to 30 family and friends!

8. We’ve shared space with these birds for a long time.

Pigeons and people aren’t exactly new neighbors. We’ve shared close proximity with them for thousands and thousands of years. Did you know that our ‘relationship’ with pigeons was first recorded all the way back in 3000 BC?

9. Tending to pigeons can be a religious act.

Pigeons are highly regarded by many who follow specific religions. For example, many who follow Islam, Sikhism, and Hinduism will feed pigeons by way of showing respect. 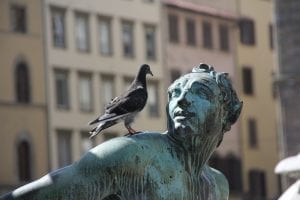 10. Trust a pigeon to find its way back!

It’s well-known that many people actually fly pigeons as a sport! There’s a reason for this. ‘Homing’ pigeons are great at finding their way back to a specific point from long distances away. So much so, in fact, that they are thought to be able to wing it back across 1,300 miles. That’s an impressive bird brain!

Pigeons do tend to mate for life and raise children together over time. It’s extremely rare that a pigeon will cheat on its spouse – they tend to flock together for the rest of their lives.

12. Dual parentage – in the animal kingdom!

In fact, both Mom and Dad can feed their young with crop milk – which they produce on their own. 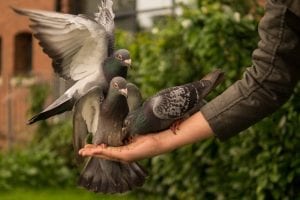 13. Their genetic family is huge.

Pigeons belong to a very large family that’s said to be more than 300 species large. They’re all part of the Columbidae genus.

Yes, they do! They are very smart and rewarding critters - however, it’s not always considered safe, responsible, or legal to keep them. Make sure you look into local laws.

As many pigeons are found living on the street, they can be seen as dirty, but they love to clean and preen. In fact, we don’t have much evidence that says they carry disease and pass it on.

How old can pigeons live to be?

Pigeons can live to an age of around 6 to 8 years old.

Do you know any fun facts about pigeons? Share them in the comments below!