Pirates have captured our imagination, for years! Their fascinating characters have been an inspiration for many writers and filmmakers. Many of us imagine pirates as fearless, scary figures, married to the sea, sailing across the world, seeking and burying treasure. But is our perception close to the truth?

To reveal some of the mystery surrounding these sea bandits, we’ve prepared 15 fun facts about pirates that’ll probably make you see them in a different light…

As a way to make a living, thousands of people turned to piracy between 1700 and 1725. During this so-called “Golden Age” many individuals we associate with piracy were active, such as Blackbeard, “Calico Jack” Rackham, and “Black Bart” Roberts.

Instead of burying their treasure, when a voyage was over, the pirates divided the loot amongst themselves immediately. So, the pirates would often find the quickest way into the pubs and brothels on the port they landed in, to spend their share.

Most pirates didn’t have long careers, due to the fact that they were involved in a tough line of work. Even the world renewed pirates, like Blackbeard or Bartholomew Roberts, were only active as pirates for a couple of years. 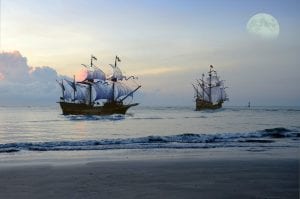 In pirate movies, being a pirate seems easy, but in reality, most pirate crews had a code that all members were required to accept or sign. These rules incorporated punishments for lying, stealing, or fighting on board. Pirates took these rules very seriously.

Pirates did have effective punishments, mind you, but walking the plank wasn’t one of them. Pirates who committed some kind of violation were abandoned on an island, whipped, or even “keel-hauled,” a cruel punishment in which a pirate was tied to a rope, thrown overboard, and then dragged.

6.   A pirate ship had good officers

A pirate ship was a well-run engine, with good officers and a clear distribution of labor. The captain had absolute command during battle, while the quartermaster supervised the ship’s operations and divided up the loot. There were many other positions, and the success on the pirate ship depended on these men carrying out their tasks efficiently.

7.   The Caribbean was a great place for pirates

There was little to no law and there were many uninhabited islands for hideaways, and many merchant vessels passed through the Caribbean.

8.  Pirates raided other oceans too

To perform their raids many pirates, including the famous “Black Bart” Roberts, crossed the Atlantic off the west coast of Africa. Others cruised as far as the Indian Ocean to work the shipping lanes of southern Asia. In the Indian Ocean, Henry “Long Ben” Avery completed one of the largest scores ever- taking hold of the rich treasure ship Ganj-i-Sawai.

9.   There were women pirates too

Even though it was quite rare, women did occasionally strap on a cutlass and pistol and take to the seas. Anne Bonny and Mary Read, who sailed with “Calico Jack” Rackham in 1719 are the most famous examples. They dressed as men and allegedly fought just as well as (or better than) their male colleagues. 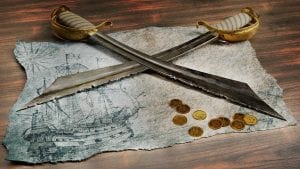 Women were regarded as bad luck on board as they were thought to bring bad things down on the ship. In fact, it’s more likely that they just brought fighting amongst the pirates on board, but there are cases of women captains, regardless of this superstition!

11. The good old Jolly Roger wasn’t used at all times

The most famous and well-known pirate flag, the Jolly Roger, 🏴‍☠️ the skull and crossbones flag wasn’t used at all times or by all ships. It was mostly seen in the Caribbean at the time of the Spanish conquest and was mostly used to scare other ships into giving up without a fight.

12. The most terrifying pirate

The most feared pirate of all was Blackbeard, who was known as the most terrifying pirate in the world. Before seizing a ship he would entwine hemp into his beard and light it on fire—to frighten his opponents. To be honest, that would probably scare us, too! 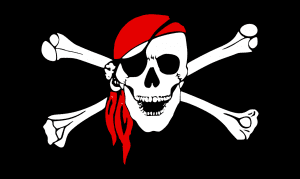 13. It’s not a myth! Pirates had eye patches

Pirates did have eye patches, and one of the reasons pirates wore eye patches was to help keep one eye adjusted to night vision for seeing below deck.

You’re asking yourself what was the pirates’ drink? It was called Grog, a mix of rum, water, lemon juice, and sugar.

The stereotypical pirate accent was invented by Disney. Many of the phrases we associate with pirates actually came from the 1950 Disney film Treasure Island, starring Robert Newton as Long John Silver. Newton’s performance, full of ‘arrs,’ stole the show, and forever shaped pop culture’s vision of pirates’ look, act, and speech. 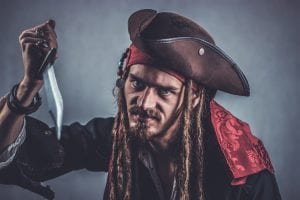 Who was the most famous pirate of all time?

It’s likely to be Blackbeard for sheer notoriety - but did you know that Sir Francis Drake is technically classed as a pirate, too?

Is Jack Sparrow based on any real pirates?

Yes! Johnny Depp’s character in the Pirates of The Caribbean movie series is loosely based on John Ward, a flamboyant pirate from the Elizabethan period.

Which pirate accrued the most gold?

That’s up to debate, but it’s thought Thomas White claimed the most valuable riches, worth more than $16 million in today’s money!

Do you know any fun facts about pirates? Share them in the comments below!

Are you fascinated with a life at sea? Check out these interesting facts about the Royal Navy!