Excessive or unwarranted (and often illegal) use of force against civilians by police officers is known as police brutality. Types of police brutality range from assault and battery to torture and murder. Broader definitions include harassment and verbal abuse. Here are some terrifying facts about police brutality.

1. Police brutality is absolutely a problem.

2. There is certainly a racial divide.

African American people are three times more likely to be killed by a police officer than white people. In addition, 21% of victims that were black were unarmed while only 14% of white victims were unarmed.

In all cases of police killings in 2015, police officers were not convicted in 99% of them.

5. The problems largely grew after WWII.

Following World War II, the incidences of police brutality increased in frequency for a wide variety of reasons.

Victims of police brutality, including not only African American people (whites and other ethnic groups too), typically come from a poor or a low-income background. They have typically lacked the political influence and the financial resources required to publicize their comments on police brutality effectively.

7. Black Lives Matter emerged as a way to fight back with protest.

The death of Michael Brown, an unarmed black teenager, triggered protests nationally back in 2014. A powerful and crucial social movement was launched by activists after his death, which is now known as “Black Lives Matter”.

8. Justice prevailed, but the damage was done.

Back in 1991, a man named Rodney King was beaten by numerous police officers after he led police on a car chase throughout LA county. A video of the beating was recorded, and King was in critical condition, suffering 11 fracturing and other injuries. Two officers were sentenced to 30 months in prison, and King was awarded $3.8 million in compensatory damages.

George Floyd, the African-American killed by police on 25th May 2020 in Minneapolis, Minnesota has sparked mass protests and rioting across the US.  It’s being reported that this level of racial civil unrest has not been seen since the 1968 assassination of Martin Luther King. 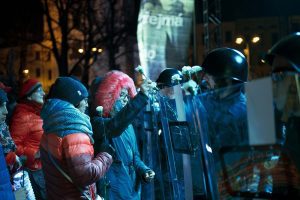 What are the main forms of police brutality?

Unfortunately - it takes many forms - including wrongful searching of suspects, excessive force, racial discrimination and even sexual assault.

Is it possible to sue for police brutality?

It all depends on the state in which an event took place. For example, it is possible to sue on the grounds of a civil rights violation in the state of California.

How common is police brutality or misconduct?

It’s thought that as many as 20% of all police officers in the US will face claims of misconduct during their careers.

Do you know any interesting police brutality facts? Share them in the comments below!