The word ‘polo’ probably brings up all kinds of ideas. It’s the name of a type of shirt, a type of necked jumper, and even the name of a popular type of mint! However, polo has always been the name of a sporting event that combines incredible horse riding along with spectacular hand-eye coordination.

Polo remains an amazing sport to watch as well as a fantastic game to play. If you’re just getting into the game or are fascinated by its history, here are some fun facts about polo worth remembering.

Polo is played by two teams, each mounted on horses, competing against each other on a large playing field.

Polo fields, by regulation size, are the largest playing fields of any sport at 300 yards long and 160 yards wide (274 meters by 146 meters respectively)! This is virtually the same area as would be covered collectively by just over nine football pitches, equating to ten acres! 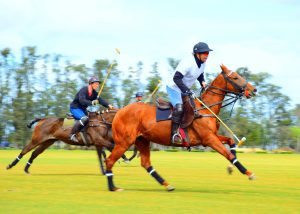 3. Here are a few rules about polo.

The object of the game is to score points by negotiating the field on horseback, striking a ball with a mallet, to get it into the goal net of the opposing team.

– The duration of matches depends on the level being played but all are divided into short periods of high-intensity action. These periods are seven minutes long and are called chukkas.

– The time limit of a chukka is based on the estimated length of time horses can comfortably endure vigorous exercise. Both speed and agility are under pressure!

– Polo matches are usually timed on the basis of four to six chukkas. Ten mounted participants are on the field during play. There are four riders in each team and two mounted referees (also known as umpires).

– A third standing referee assists in decision making if there is doubt or dispute about a situation in play that the mounted referees cannot agree upon.

– Players have no fixed positions to play on the field but two are usually designated to ‘attack’, one player to ‘defend’, and the fourth player to work ‘midfield’. 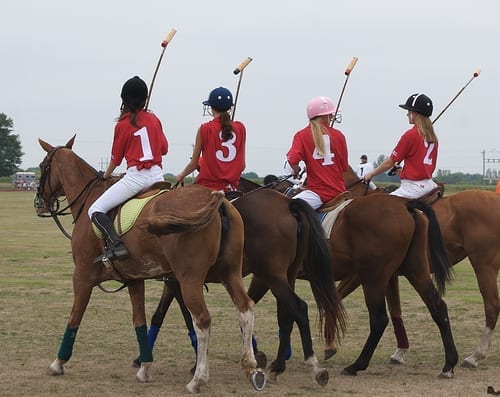 Both men and women play polo and gender is not a consideration in the game. Handicaps, however, are! Regardless of their gender, players who share the same level of handicap are regarded as equals.

Handicaps relate to the number of goals scored with a range from two to ten. Handicaps are continually reassessed during the season of play.

Polo is a rare sport with regard to consideration of whether players are right or left-handed. Though left-handed players do play, the play must be from a ‘right-handed perspective’.

Right-hand play is the ‘norm’ considered essential for the safety of both humans and equines! The horses weighing around half a ton can travel up to speeds of around 30 miles per hour!

6. Specific horses are used in polo.

Polo horses are usually referred to as ‘ponies’, are normally thoroughbreds of approximately 15 hands tall, and are traditionally chosen for their agility, speed, and ‘acceptance’ of demanding tasks.

7. Horse styling matters in this game!

Manes and tails are traditionally cut short and/or plaited to minimize tangles. This is also to ensure a full view of the ball, mallets, legs, and feet!

At one time, horses’ tails were amputated to leave only a short bump close to the body. Thankfully, this was deemed too cruel and tails are wrapped and/or trimmed nowadays instead. 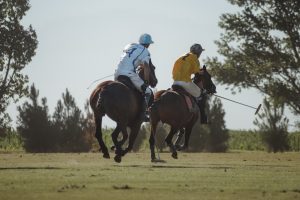 8. It can get pretty messy.

Lumps of earth of varying sizes are kicked up by the hooves of horses during play. This creates quite a mess, and of course, an even playing field is better for the ball too!

The lumps are called ‘divots’, and now form the basis of a well-known tradition in the game. This is called ‘stomping the divots’, where spectators are invited onto the field during intervals to tread on the mounds and so level the field before the next play.

In accordance with tradition, polo players usually wear white trousers. This dates back to when Indian nobility started to play the game in extremely hot weather and white clothing was cooler to wear.

10. It set the Olympic standard.

Polo was first seen as an Olympic sport during the Summer Games in 1900. 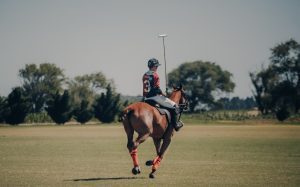 11. It outdates many games.

Polo is considered by many people to be the first organized team sport, likely to have been played by nomadic warriors. In fact, cave paintings show illustrations of groups of people on horseback, appearing to brandish ‘mallet’ shaped objects.

12. We have a record of an ancient game.

In the year 600 B.C, a tournament was played between the Persians and Turkomans, the latter of whom won the game. This is the first known game of Polo on record.

The sport spread from the east and was popular in India, from where British soldiers are likely to have first learned the game.

Initially referred to as ‘hockey on horseback’, officers based at the barracks in Aldershot organized the first recorded game in England. It was played at Hounslow Heath in 1869. 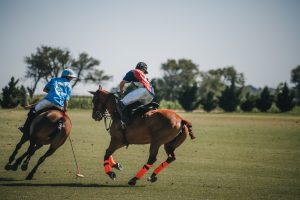 An Irish Captain in the British Cavalry’s 13th Hussars, John Watson, created the first-known official rules on which today’s games are based.

Subsequently, his ideas were revised and today the game is played in accordance with those regulations, known as the ‘Hurlington Rules’.

Today, Polo has regained popularity and at least 77 countries are known to play this fast and exciting sport.

Is polo a rich person’s game?

Polo is generally regarded as a ‘rich’ sport as it requires a lot of training and equipment - it’s quite the investment.

Is polo very difficult to play?

Yes! Polo is very hard to learn and master. That’s because you effectively have to ride a horse and play hockey at the same time!

Can you learn polo at any age?

Yes! Providing you are willing to put in the time and effort, anyone can learn to play polo.

Do you know any fun facts about polo? Share them in the comments below!