It’s safe to say that raccoons have something of a bad and often unfair reputation!  Across North America, many people find that these clever and often dextrous creatures roam around urban areas after dusk.

That means that they can be a real nuisance when they’re looking for food in people’s household waste! However, there is much more to your humble raccoon that its bin-diving tendencies!

Here’s some fun facts about raccoons – the wily, lovable critters – though you won’t want to get on the bad side of them!

1. Raccoons don’t hang around in packs.

Despite what you may imagine, raccoons tend to be pretty solitary. They generally find somewhere to sleep during daytime and will roam around at night.

2. Raccoons will eat until they are enormously fat.

Raccoons are predisposed to hibernate better than many animals! That’s because they store a huge amount of fat – they can live off this while they go to sleep. It’s thought that a raccoon is likely to shed around 50% of its total weight over the course of winter!

3. The colder the habitat, the fatter the raccoon.

Generally, a raccoon is likely to weigh up to 16lbs, however, those that live in chillier areas are bulkier for obvious reasons. They’ve got to stay warm somehow! 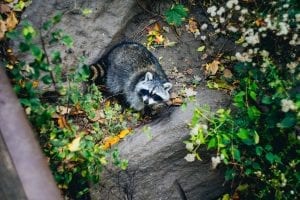 Raccoons are some of the most adaptable mammals on the planet. You’ll find them roaming urban areas, woodland, and cold climates alike.

5. They don’t just take to the streets.

What’s more, the raccoon is adept at swimming. Generally, it’s the all-around superstar of the mammal kingdom!

They are one of few mammals to have human-like hands. That’s because they have five fingers on each hand, which makes it easy for them to break into areas in search of food.

7. They learn through touch.

It’s thought that a raccoon is able to learn an incredible amount about an object or item just by touching it. They have amazingly sensitive paws – with five times to power in their hands than most mammals.

8. No wonder they get so chubby!

A raccoon will eat just about anything. That’s why they are infamous for scouring around urban areas for refuse and rubbish. However, they will only likely rummage through household waste if there’s no fresh food available. Raccoons will generally enjoy eating fresh fruit, nuts, and even animals such as rats and frogs!

9. Raccoons thrive in the wild.

A raccoon’s lifespan differs hugely in the wild compared to in captivity. In its main habitat, a raccoon is likely to live for up to five years. However, in captivity, you will likely find a raccoon lives for as long as 20 years. 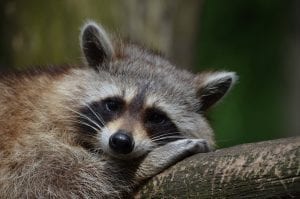 Raccoons on the whole are not endangered, but one species – the pygmy raccoon – has only around 1000 individuals, maximum, left in the wild.

Raccoons are amazingly deft and will survive large falls without a scratch. In fact, you can expect a raccoon to drop around 40 feet without hurting itself.

What’s more, they are super quick on their paws. A raccoon will achieve speeds of up to 15 miles per hour if in pursuit or if taking flight!

No one’s really sure what the raccoon’s ‘mask’ markings are really for. However, some believe it’s to do with reducing glare, while others feel it is purely to help them identify one another. 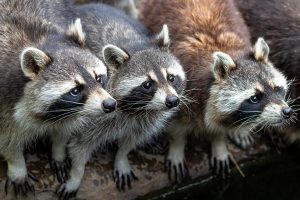 Are raccoons really bad to have around?

Raccoons can cause a lot of damage and can throw garbage around - but they can also help to keep the rodent population low!

Probably not, but given that they are big opportunists, it’s best not to let a defenseless kitten wander around a raccoon habitat.

How do I keep raccoons away?

Remove the food! Make sure your trashcans are packed tight, that you have strong fences, and that you don’t give them any food directly - they’ll be back!

Do you know any fun facts about raccoons?  Share them in the comments section below!

This page was last modified on November 23, 2021. Suggest an edit