You’re probably aware that radio waves are used in devices such as mobile phones, traditional car radios and television programming. But how well do you know how radio frequency actually works, and what the frequency measures? Here are some fun facts about radio waves.

The longest wavelengths in the electromagnetic spectrum belong to radio waves. They can range from the length of a football to larger than the size of our planet!

2.    Radio waves were discovered in the 19th Century

In the late 1880s, a man named Heninrich Hertz proved the existence of radio waves. He did this by using a spark gap that was attached to an induction coil and a separate spark gap on an antenna.

Through his experiments, Hertz proved that radio waves possess all properties of electromagnetic waves.

Frequency is measured in Hertz, after Heninrich Hertz.

Looking at the sky with a radio telescope is significantly different to what you see using a traditional telescope. You are likely to see distant pulsars, remnants from a supernova and star-forming regions instead of seeing the usual point-like stars.

Quasars are also detectable by a radio telescope.

Without the use of different radio wave frequencies, satellite communication (which is a crucial part of our modern world) would not be possible. Satellites work by receiving a signal from a ground-based station amplifying it and beaming it back down to a different station.

6.    Radio waves help in all kinds of industries

Radio wave energy is used in manufacturing such as plastic moulding, and also has uses in food processing.

Waves of lower frequency travel further. This is why a VHF radio works only within ‘line of sight’.

Radio waves can travel through wood, concrete and bricks.

Radio waves are produced by anything that is somewhat warm.

Much like other electromagnetic waves, radio waves are created when excited electrons return to their regular state. 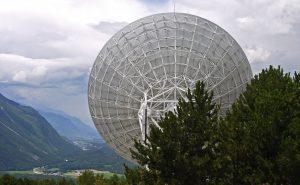 Can anyone broadcast radio from anywhere?

No, broadcasting involves the emission of specific radio waves and these are governed by various authorities. Without control and co-ordination, radio waves may interfere with each other to cause confusion and maybe even disasters!

What would life be like if we could see radio waves?

We’d be able to see electricity everywhere - in all kinds of colors! Magnetic fields would be obvious to spot, too - things would be a lot brighter!

Does WiFi use radio waves?

Yes, to an extent. WiFi works on the basis of radio frequencies.

Do you know any fun facts about radio waves?  Share them in the comments below!

Are you fascinated with physics?  Check out these cool facts about Albert Einstein