Better wear some shades – the rainbow trout’s swimming upstream! No, this famous fish isn’t exactly every shade of the rainbow, but it’s so-called thanks to the fact that it’s more colorful than most.

This super-diverse and eye-catching critter is full of surprises, too! Here are some fun facts about rainbow trout you might not be aware of.

1. Its name is a complete lie!

No, it’s not even a trout, and it doesn’t look like the rainbow – it’s an imposter! It’s actually part of the salmon gene pool, and it’s known as Oncorhynchus mykiss.

2. These fish get swole!

Rainbow trouts don’t mess around when it comes to bulking up. They are truly hefty – and can get as long as 90cm in the wild. What’s more, they generally grow to be as heavy as 9kg. However – the biggest-ever rainbow trout was truly enormous – at almost 26kg!

3. They’re not fussy about meat.

Rainbow trout tend to eat a varied menu, on the whole. While they commonly feast on the eggs of other fish, they’re normally keen to sample any other critters smaller than themselves. They are insect munching machines.

The rainbow trout itself, however, is not at the top of the food chain – or we’d be in trouble! Its common predators are usually birds that enjoy fishing. They tend to fall prey to herons, for example.

4. These critters will get anywhere!

Weirdly, mammals such as raccoons also enjoy the odd spot of rainbow trout now and then. Well – raccoons will eat anything, in any case!

5. What color is a rainbow trout – seriously?

No, rainbow trout isn’t rainbow colored, sorry. It’s normally well spotted for, well, its spots. It has black spots across its body and also has a keen red stripe, too. It’s got a white belly and is generally more colorful than other fish nearby.

6. They may change their looks from place to place.

While rainbow trout tend to have red stripes and black spots, colors can vary depending on where you find them. It’s all to do with differences in the diet – some are even pink, believe it or not!

The rainbow trout is very ubiquitous, it breeds like mad – but you probably won’t find any in the colder reaches of Antarctica for obvious reasons.

8. It really hates its greens.

The rainbow trout is a resolute carnivore. Even if starving, it will turn its fishy nose up at greenery.

Rainbow trout, particularly those in freshwater, can be known to lay their eggs just about anywhere they like. That tends to be why you will find them all over the place!

However, some trout prefer to lay eggs at home. As they are technically salmon, this makes sense – as it’s what salmon do, on the whole!

Trout are great at digging, and the rainbow trout emphasizes this by burrowing down into gravel pits with its tail! This is how it buries its eggs.

11. There’s plenty of variation in this fish.

Rainbow trout come in around 15 different varieties, most of which you’ll see across the North American wilds.

The rainbow trout can generally expect to live up to six years – pretty impressive for a wild fish! However, you may find that they live for longer in your own tank. 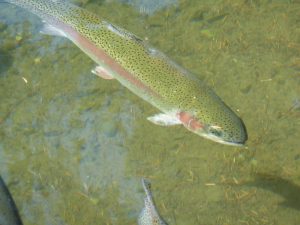 Rainbow trout enjoy living in rivers and streams, however, there are even some that live out in the ocean. They really aren’t fussy!

Rainbow trout tend to be fished a lot by humans as they are rich in omega-3. 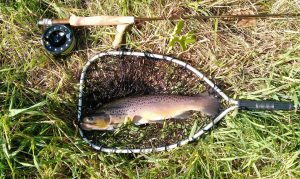 Rainbow trout is said to taste quite a bit like salmon (it is one, after all) - with a bit of a nutty taste.

Is rainbow trout healthy to eat?

Yes, on the whole - it’s a very healthy fish to eat as it arrives with more omega-3 than most fish, and is also low in mercury.

Is rainbow trout raised in farms?

In the US, you’ll find that any rainbow trout shipped to the home market are raised on farms.

Do you know any fun facts about rainbow trout? Share them in the comments below!