Rainbows disappear as quickly and as mysteriously as they appear. They are used as symbols for different causes and companies around the globe, and are seen as a symbol of health, happiness and honor.

So how are these etherial optical effects formed and how do they disappear without a trace? What historic tales of leprechauns and gods have formed today’s association of rainbows with pride, inclusion and joy? Hopefully the science and history behind rainbows will be as fun to learn about as they themselves are beautiful to look at.

1. What makes a rainbow?

A rainbow is created by the perfect combination of refraction, reflection and then dispersion.

2. How many colors are in a rainbow?

There are seven colors perceived in rainbows: Red, orange, yellow, green, blue, indigo and violet, in that order.

3. What’s the science behind it all?

When water droplets are present in the air, often from rainfall but could also from fog, a waterfall or a fountain, rays of sunlight then reflect off of these and some of the light is then dispersed and reflected back towards the observer. 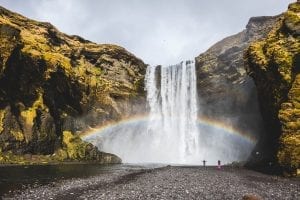 4. What’s the best way to see a rainbow?

To view a rainbow in the sky, you must be positioned so that the Sun is behind you, and the water droplets in front of you.

5. You probably won’t see a rainbow from December to February.

Rainbows are rare in winter as the crucial water droplets needed for this phenomenon freeze into ice and scatter light in such ways that a rainbow cannot be formed.

The colors of the rainbow are formed as light travels more slowly through the water than it does through the air, bending as it does so, thus splitting the light into all of its colors which we normally perceive as white.

7. The word ‘rainbow’ is a bit misleading.

Rainbows are not actually “bows”, they are in fact full circles but the other half always lies below the horizon and you would have to be looking at it from the sky, like from an airplane if you happened to have one handy, to see the circle.

8. Double rainbows are more common than you think.

All rainbows are also double rainbows, but the second one is usually too faint to see, it is born with its colors reversed with the red on the inner part of its arc as it has been reflected twice in the water droplets.

It is possible to calculate and thus determine the angle which the rainbow will be at using Snell’s Law. Rainbows are mathematical, as is everything else found in nature. 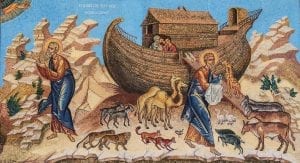 Rainbows and their meanings and/or explanations are present in almost every single religion and religious text.

11. Was a rainbow a sign of promise from a higher power?

One of the earliest explanations of a rainbow dates back to Noah’s story in the Book of Genesis where it was stated to be a sign from God that he would never try to kill all of humankind with a flood ever again… Promises, promises!

12. Are rainbows bridges to other worlds?

For others, it was less considered a God but more of a path between our world and theirs, as in Norse mythology, the Bifröst is a rainbow bridge connecting the world of the divine to that of the mortals.

Sometimes it has more negative connotations: the leprechauns who had stolen gold from the Vikings were said to have hidden their loot at the end of the rainbow, which is an optical effect and thus is impossible to touch let alone approach or deposit gold at the foot of. 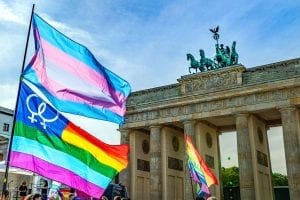 14. We’ve been studying rainbows for centuries.

The first person to take scientific interest in a rainbow is said to be Aristotle, the 4th century BC Greek scholar. His findings were unmatched for many hundreds of years to come and those who took an interest after him would usually revert back to his first findings.

15. Even in the modern age, the rainbow sends a powerful message.

In the 1960s people began to use depictions of rainbows at peace marches and anti-nuclear weapon demonstrations.

16. It’s a universal symbol of acceptance and diversity.

The diversity in colors of the rainbow have been adopted by the LGBTQ+ movement, ever since drag queen and artist Gilbert Baker made the first rainbow flag in 1978. 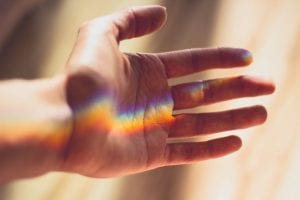 In today’s climate, tinged with restrictions brought on by the Coronavirus pandemic, schools, streets and playgrounds emptied and we were told to stay indoors to protect ourselves, others, and the NHS. The rainbow symbolises how grateful we are for the NHS and also that, though they may be hidden away, our children are still full of hope and vibrance.

Is there pink in a rainbow?

No - there are seven colors, and even if they were to blend together, red and violet - which make pink - are at opposite ends.

Can you touch a rainbow?

It is possible to touch water particles and refracted light together, but the strange part of this phenomenon is that you can’t physically touch a rainbow you can see!

Can you stand in a rainbow?

No - rainbows never stand still, due to the angles at which light bounces, meaning when you move, so do they!

Do you know any fun facts about rainbows? Share them in the comments below!