For Muslims, the followers of Islam, Ramadan is a holy month of fasting, a period of introspection, communal prayer, and reading of the Qur’an. Ramadan is celebrated as the month when God revealed to the Prophet Muhammad the holy book of Islam- the Qur’an “as guidance for the people.” This holy month begins with the arrival of the crescent moon, 10–12 days earlier each year, allowing it to fall in every season throughout a 33-year cycle, and again ends with the crescent moon’s appearance.

To learn a bit more about this holy month, here are some interesting facts about Ramadan that’ll fill you in on the details…

The celebration of Ramadan

1. The ninth month on the Muslim calendar

Each year, Ramadan is celebrated on the 9th month on the Muslim lunar calendar and lasts either 29 or 30 days in a lunar month. Ramadan 2021 will begin at sunset on Monday, on the 12th of April, and end on Tuesday, on the 11th of May. A lunar calendar is based on the phases of the moon and falls short of the solar calendar by 11 days. Therefore Ramadan doesn’t start on the same date each year and over time, passes through all the seasons.

2. The holiest month of the year

Muslims believe that Ramadan is the holiest month of the year when the Qur’an was first revealed to Muhammad.

3. It was based on a pagan Moon God

Ramadan was based on a pagan “Moon God” festival that lasted from moonrise to moonset.  It was later adapted from sunrise to sunset by the prophet Muhammad. 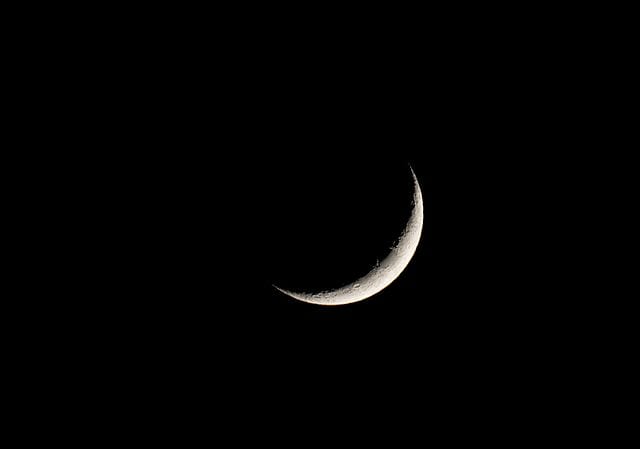 4. A time for fasting

One of the five fundamental principles of Islam is fasting. During fasting, Muslims are supposed to avoid eating, drinking, smoking, and pleasure. When children reach puberty they are required to fast, while the sick and elderly, along with travellers, young children, pregnant women, and those who are nursing are excused from fasting. Still, they should make up for the missed fast days sometime in the future!

5. What are the other 4 fundamental principles of Islam?

The five principles of Islam are essential to the lives of Muslims. Besides fasting, the other four pillars include shahada, a declaration of faith, prayer, five times a day, zakat, giving charity, and pilgrimage to the city of Mecca, Saudi Arabia, at least once in a lifetime if physically and financially possible.

During Ramadan, Muslims are also expected to abstain from pleasures, sexual activity, as well as from having unkind or impure thoughts and words and immoral behaviour so they can become closer to God through prayer. 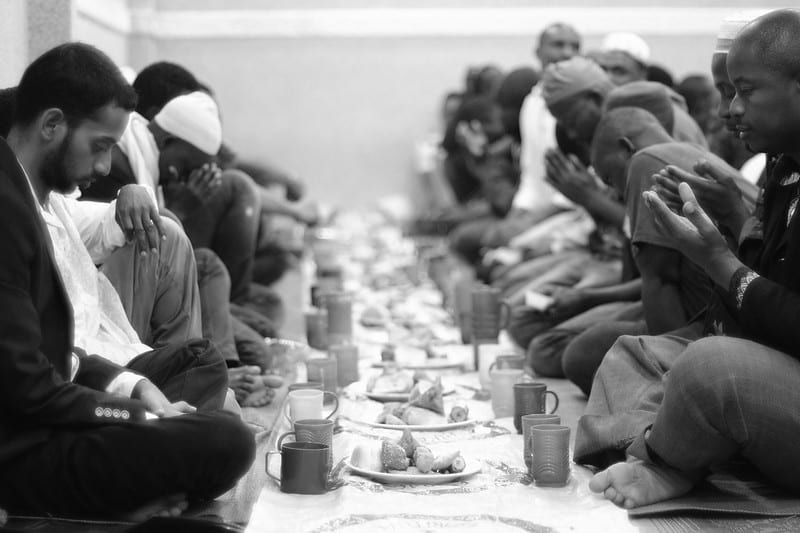 During the month of Ramadan, many Muslims give more to charity than they do at other times of the year, as the rewards of charity are considered greater at this time.

8. A time for self-restraint and self-reflection

Ramadan is reserved for self-restraint and self-reflection! In fact, fasting is a mean to cleanse the soul and have empathy for those less fortunate. Muslims go to work and school and continue with their usual activities, but they also read the entire Qur’an, say special prayers, and attend mosques more frequently.

9. Traditionally, the fast is broken with dates

Dates have essential carbohydrates, lots of potassium, magnesium, and fibre, all of which are important for the body after a day of deprivation, so traditionally, they’re used to break the fast.

The first meal that breaks the fast each day is known as “iftar”. Iftar usually starts with dates or apricots and water or sweetened milk and often continues with large feasts celebrated with family and friends. According to culture, the types of served foods vary.

There are additional prayers offered at night if possible performed in congregation at the mosque. During these prayers, over the month of Ramadan, the entire Qur’an may be recited.

In some Muslim-majority countries work hours are adjusted during the day and sometimes reduced to enable such acts of worship in the evening.

According to the Qur’an eating and drinking are permissible only until the “white thread of light becomes distinguishable from the dark thread of night at dawn.” Therefore, in some countries, Muslims sound drums or ring bells in the predawn hours to remind others that it’s time for suḥūr, the meal before dawn. 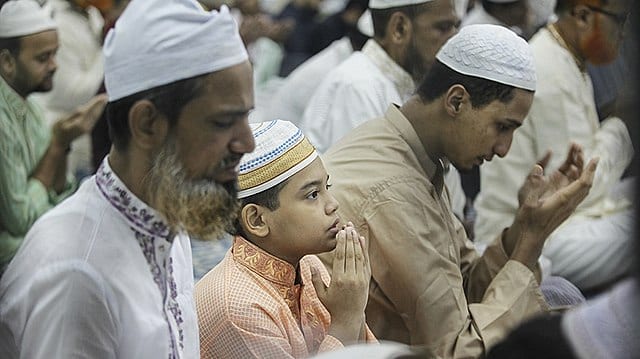 What happens at the end of Ramadan?

Eid al-Fitr, the Festival of the breaking of the fast, begins when the first sight of the new moon is seen in the sky.

The three-day festival also known as Eid al-Fits is one of Islam’s major holidays. This worldwide celebration marks the end of the fast.

Besides celebrating the end of fasting, Muslims also thank Allah for the help and strength that they were given throughout the previous month. Children are often given presents and new clothes during Eid al-Fitr. 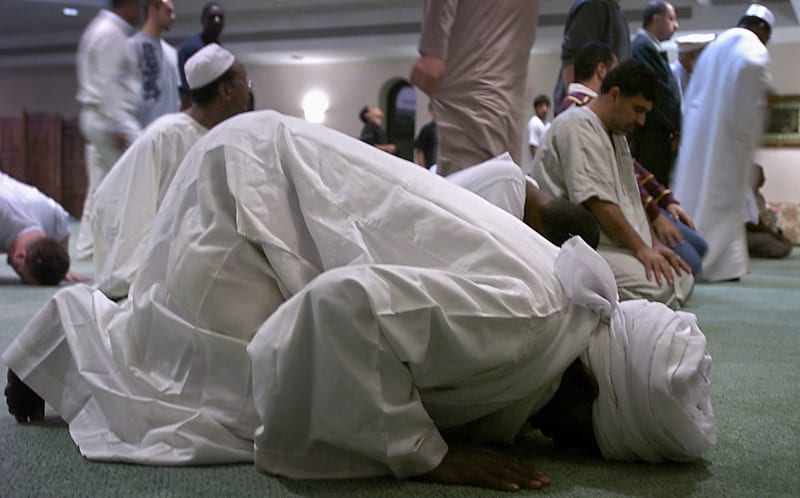 Ramadan throughout the globe

The capital of Iceland, Reykjavik, has the longest-lasting fast in the world, with the fast-starting just after 2 am and finishing at midnight. Truly, fascinating, a 22 hours long fast!

Sydney, Australia has the shortest fast in the world! It starts around 5:30 am and ends just before 5 pm – less than half the time of fasting in Iceland.

In Egypt where the majority of the population are Muslims, during Ramadan, the clock is put back an hour so that it feels like the fasting ends earlier. 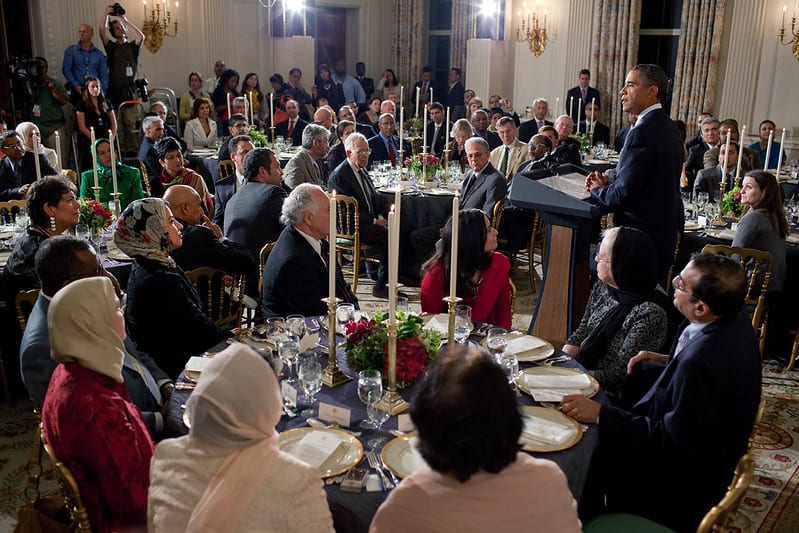 Ramadan in the White House

20. The first Eid al Fitr dinner at the White House

Hillary Clinton, then the first lady, organized the first Eid al-Fitr dinner at the White House in 1996. Her husband continued the tradition throughout the rest of his time in office.

21. Iftar at the White House

In 2001, President George W. Bush hosted an iftar at the White House and continued the dinners every year of his two terms in control.

Do you know any fun or interesting facts about Ramadan?  Share them in the comments below!

📖 20 Brilliant Facts about The Bible