In times of dire need, we must be mindful about what we consume, including how much. Rationing is a term which applied during wartime to help ensure that everyone had enough access to food and necessary supplies. However, it can also apply during any time of crisis.

Rationing can come into effect when there are simply not enough supplies to go around – it is often a measure brought in to counter-act against panic buying. But what else should you know about rationing? Here’s a full fact file.

1. Rationing was a wartime staple.

Rationing was brought in during the Second World War in the UK. It became a way of life for millions of people from the start of 1940 onwards, as a result of food running short. This meant that households would need to use coupons through what was known as a ration book.

2. This meant a lot of everyday items were checked.

Some of the most basic foodstuffs and everyday consumables were subject to rationing. This means that even the most common of items, such as meat and potatoes, were heavily restricted.

3. Growing food, however, was good.

During rationing, homeowners and families were encouraged to grow their own food. While vegetables weren’t subject to rationing, they were still running low. Therefore, many families lived – literally – off the land. 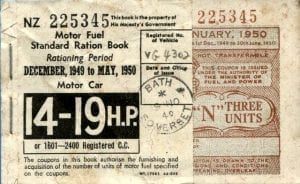 During this time, ‘black market’ goods became extremely popular. This was because queuing for specific items often resulted in lengthy wait times. However, those peddling such wares at the extent of the British public were arrested and brought to task.

In fact, it’s thought that around 2,300 people were arrested and prosecuted for black market peddling in just the first 14 months of rationing alone.

5. It was all to do with Britain being cut off.

One of the main reasons for rationing taking place in Britain during World War II was due to German authorities restricting the amount of food reaching the shores of Britain. German forces would often attempt to sink supply ships from the USA and Canada by deploying submarine attacks.

Rationing measures were brought in as a precaution. It was actually fairly unlikely that the country would starve in the long term – however, the measures helped everyday people start to understand the importance of individual supplies, and why it was important to keep within one’s means.

Believe it or not, rationing continued in the UK until around 1953. That means the country was under ration books and coupons for around 13 years, and for eight years beyond the end of the Second World War.

This, it is agreed, was as a result of sheer re-adaptation. It took a long time for dust to settle from the War, which also meant that everyday people needed to take time to readjust to everyday shopping and life in general.

8. It’s never seen as a viable option until the last minute.

Rationing is only ever brought in during extreme circumstances. Item rationing may occur when specific products or foodstuffs go out of stock quickly, or when there are embargoes placed on trade.

9. Could rationing have helped people get healthier? Not that it’s ever recommended!

Many historians claim that rationing helped to encourage people to take on healthier diets – by eating more greens and eating less of the bad stuff! 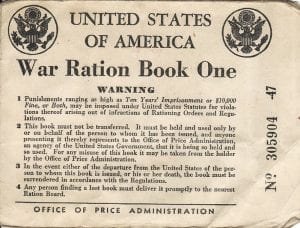 How much food did people get during rationing?

This really varied depending on the sorts of food and supplies in demand at any one time! On average, households could expect one fresh egg per week, and 50g of cheese - these are just common examples!

How easy is it to ration food?

Not as easy as you might think. By its definition, it’s said that to carefully ration food properly, you’d need to divide your available food up between the people who need to eat, and the number of days they need to eat for.

Why do people ration?

Rationing was largely seen as a wartime concept when there was a need to account for shortages in supplies - as a result of blocked ports and ongoing conflict.

Do you know any interesting facts about rationing? Share them in the comments below!

This page was last modified on June 2, 2022. Suggest an edit