Although reindeer do not fly (unfortunately), they do have red noses. They are part of the deer family, which includes elk, moose, and deer.

Like other members of the family, reindeers have antlers, long legs, and hooves.  Want to learn more?  Sit back and enjoy these fun facts about Reindeer!

1.    A reindeer never worries about schedules

Reindeer do not have an internal body clock, which can be utilised effectively for their survival as it helps their sleep-wake cycle and their metabolism deal with long polar nights and days in the region they live in.

They are required to travel over huge amounts of terrain when they migrate, and wide rivers are included. Therefore, they have adapted to swim quickly and easily move between 6.5 km/hour (4 mph) and 10km/hour (6.2mph).

3.    Reindeer are oddly associated with Christmas

A poem known as ‘A Visit from St. Nicholas’ was the first to associate reindeer with Christmas. It was written by an American named Clement Clarke Moore in 1823. This poem is primarily responsible for the misconceptions today of Santa Claus and his reindeer. 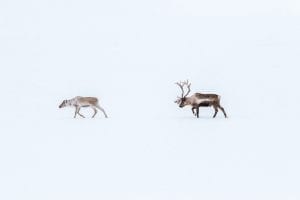 5.    Reindeer really DO have red noses!

A network of blood vessels is the secret to the ‘red-nosed’ reindeer. According to the University of Rochester in New York and scientists in the Netherlands, the reindeer have around 25% more capillaries in the structure of their noses than humans, and they carry oxygen-rich, red blood. The blood flow increases during colder climates, which keeps the surface of the nose warm. The network of blood vessels is also crucial for the regulation of the internal body temperature of the reindeer.

6.    Reindeer love chowing down on more than carrots

Reindeers only eat vegetation, as they are herbivores. Their diet consists of grass, fungi, leaves, mosses, and herbs. An adult reindeer eats about 4 to 8 kg of vegetation on average every day. They are required to dig through the snow using their antlers to find food during the winter.

The gestation period for female reindeer is around 7 and a half months, and they typically give birth to one calf at a time (although they can have up to 4 at a time). These calves are able to walk after merely an hour after they’re born, and they eat solid food after about a week, in conjunction with their mother’s milk. Reindeers can live up to 18 years. 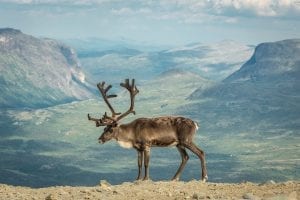 It is believed that they are the only mammals to see UV light.

10. We’ve been hosting reindeer for centuries

It is thought that domesticated reindeers have been around since the Bronze and Iron ages.

What are the differences between caribou and reindeer?

There are actually no significant differences between reindeer and caribou! They are the exact same animal! However, caribou are from North America whereas reindeer are from Europe and Asia.

Reindeer are generally speaking very gentle animals, however, it is not recommended to approach one in the wild, especially during the rutting season!

Sadly, yes, even today reindeer are hunted as trophies for gun rooms and hunting lodges. They're hunted for meat and fur, too.

Do you know any fun facts about reindeer?  Share them in the comments below!