The rhinoceros is an incredible beast – big, bold, and boasting an amazing horn, the rhino is also sadly one of the most-threatened creatures on the planet. What is it about these critters that is making them so endangered?

September 22nd, World Rhino Day, aims to educate the world a little bit more on why this species is so important to our ecosystem. Whether it’s September when you are reading this, or indeed any other time of year, there are plenty of great things you can learn about these mighty mammals.

Here are some fun facts to get you started!

Rhinos have been around a long, long time – their ancestors were said to be around more than 50 million years ago.

The black rhino and also the white rhino are both actually grey in color – so why the names? Search us! 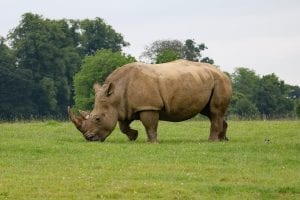 It’s commonplace for rhinos to sometimes have their horns partially removed so they are not hunted and killed by poaching humans. Don’t worry, as they can grow back – but it can take up to three years.

Rhinos as animals are already pretty big, but the white rhino takes the cake. They can grow to be up to 6,000lbs in weight – and 2,000lbs of that might just be their heads!

6. Rhinos don’t always use horns on the attack.

Believe it or not, the rhino is actually more likely to attack with their teeth than with their horns.

Spare a thought for female rhinos – they stay pregnant for up to 18 months, double the human period!

Weirdly enough, the rhinoceros certainly makes a noise, but it’s at such a n advanced frequency that we can’t actually hear it.

Devastatingly, it is thought that there are fewer than 30,000 rhinos left living in the wild today. That’s a reduction of more than 420,000 in just over a century.

In fact, it is the Javan, black and Sumatran rhino species that are considered the most at-risk. That means there is significant effort being undertaken to try and keep them propagating! 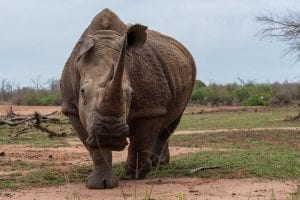 10. They have a few close relatives.

The rhino is actually a close relative of the tapir, as well as the zebra. They are all ungulates!

The rhino isn’t best-known for its eyesight – which is why its hearing and its smell really do make up for things.

Rhino horns can grow to be absolutely colossal. The biggest horn ever recorded grew to be an astonishing 60 inches long! 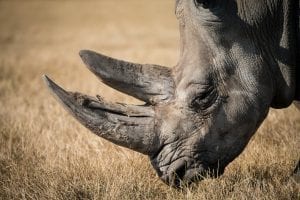 13. Rhino horn is used in medicine.

We have, apparently, been using powdered horn of the rhinoceros in medicine for hundreds of years. Thankfully, times have moved on more than a little.

Rhinos take mud baths regularly, simply because it helps them to stop getting bitten by the odd nasty bug.

15. They’re smarter than they let on.

The rhino brain is said to be very small, at least compared to their great bulk overall! That said, a small brain is certainly not an indicator of poor intelligence. 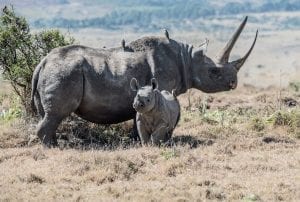 It’s true – rhinoceros species won’t touch meat despite their fearsome appearances. The rhino loves to chow down on vegetables, and they also enjoy fruit and twigs. They can consume more than 100lbs of nutrition in one 24 hour period!

FAQs about The Rhinoceros

Is the rhino going extinct?

Sadly, several species of rhino are threatened. However, there are many conservation efforts, and some may come back from the brink.

Are rhinos linked to dinosaurs?

No - dinosaurs were reptiles, whereas rhinos are mammals, however, there have been woolly rhinos that once walked the Earth.

Are rhinos older than elephants?

Some are! Believe it or not, the African rhino has been on Earth much longer than the African elephant, for example.

Do you know any fun facts about rhinoceros?  Share them in the comments below!

Are you interested in learning more about Africa’s large safari animals? Check out these fun facts about Elephants

This page was last modified on September 26, 2021. Suggest an edit