Everyone always searches for information about the ergonomic, aesthetic, and functional qualities of rugs and carpets, but have you ever tried to find all the fun facts about them? If that’s what you’re looking for, then we’ve got your back. Here are 10 interesting facts about rugs and carpets:

1. Rugs from The Renaissance Have Survived to This Day

It’s a well-known fact that rugs are not a modern invention – in fact, they’ve been around for centuries now; maybe even the Neolithic era when cavemen used to put animal skins on the floor in order to add a sense of comfort to their stone surroundings. However, there are several rugs from the Renaissance that are still around and are considered priceless antiques.

Nomads used to travel with their rugs and used them as sleeping sheets. The mountainous tribes used to weave rugs to keep their abodes warm in the harsh winters, while in other cultures, rugs were also used as saddles that were buried with the horses when they passed away. 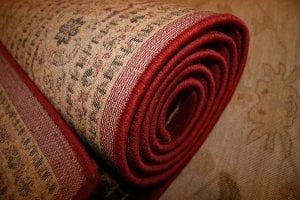 2. Rugs Should Be Cleaned Once a Year

On average, your rug requires a full-blown professional cleaning session every 12 to 18 months. This is because carpets are excellent fabric traps for air pollutants and allergens. They suck these particles from the air and trap them within their fibers. Cleaning helps improve the air quality of a room.

However, if you don’t go for a professional clean-up in a year’s time, then things are going to get bad. The rug will become a carrier for pollutants, which may become harmful for your health. Therefore, it’s best if you have it cleaned thoroughly every year. At the very least, a rug should be vacuumed regularly to keep them in good condition.

We’ve always known that oriental rugs are the epitome of sturdiness, but did you know that the oldest one was discovered in a cave around 1949. Known as the Pazaryk rug, it can be dated back to the 5th century BC and has survived all these years in an almost pristine condition. It was actually put in a Siberian king’s tomb and had frozen over time.

While the rest of the things were looted by raiders over time, the rug actually managed to survive. Its red, gold, and green weave is a sight to behold, and the craftsmanship shows through the intricate patterning.

3. Any Rug Larger Than 40 sqft is Considered a Carpet

People often wonder what the difference between a rug and a carpet is. Both are floor coverings and both have many similar aspects, so what makes them so different? The answer is: size.

However, the variations of this size difference are debatable, because even the largest area rug is 12’x18’. So when does it stop being a rug and start being characterized as a carpet? Well, anything larger than 40 sqft is considered a carpet, so a 12’x18’ sized rug is technically a carpet too. 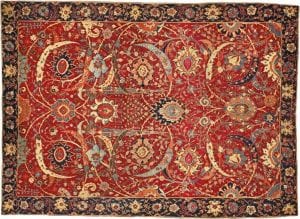 The most expensive rug ever was a 17th Century Persian Carpet. The Clark Sickle-Leaf Carpet sold on the 13th of June, 2013 for $33.7 million. More than $20m more than the second most expensive rug/carpet, it’s hard to see this sum will be beaten in quite some time.

We live in a world full of “designer” things, and rugs are definitely one of them. But where exactly did this concept actually originate? Well, it was back in the 1860s, when professionally designed rug patterns were stamped or stenciled on burlap backgrounds. This culminated in a successful business, as people are always attracted to things that have a designer-like quality – yes, even back in that era.

One of the first people to monetize this idea as a successful business was Edward Sands Frost, a merchant from New England. His stencil patterns are heirlooms that people try to curate for their collections even today.

6. Rugs Were Industrialized in the USA

Back in the heyday, Persian rugs were the most decadent and expensive commodity (and probably still are), but the designs can definitely and easily be replicated now thanks to industrialization. So, where did it all begin?

Industrialization of the carpet industry first happened circa 1791 in the USA, when a carpet mill was first set up by William Sprague in Philadelphia. Then in 1839, the power loom was invented by Erastus Bigelow, which was then improved on in 1849. Thus, mass manufacturing of carpets became a thing that is still ongoing and providing inexpensive carpeting solutions for many homeowners today.

7. The World’s Largest Carpet Was The Size of a Football Pitch

People are always striving to break records these days, and we certainly have one pertaining to the largest hand-woven rug! It’s actually the Qasr al-Alam carpet and it was woven in the heart of Iran. It was designed by Ali Khaliqi and it took almost 18 months for it to be fully woven. The size of this carpet is equivalent to an entire football pitch and the patterns featured in it are wholly unique, not representing any particular region of Iran. It’s considered a well-recognized piece of art in the industry. 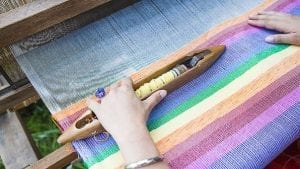 The quality of a Persian rug is always determined by how many knots it has in an inch by inch square. The best quality Persian rugs of about 9’x12’ size tend to have 1.5 million hand-tied knots! That’s a lot of detail, attention to color coordination, and fineness.

It also takes a lot of labor (around 300 people) and time (around 400 days) to make. They are flatwoven, a true labor of love, and can also be used as artwork/tapestries instead of typical old carpets.

Beetles are the one and only hardcore con of knotted wool rugs and can definitely tip the scales. While there are many advantages of furnishing your floors with wool rugs, it’s important to know that the wool can actually become home to beetle grubs.

These little monsters have chemicals in their stomachs so when they nibble on the wool, it converts to sugar, causing them to eat it through like the insect-version of candy.

So, these are some lesser known facts about rugs and carpets. We hope that this trivia interesting and makes you appreciate your rugs even more.

Do you have any interesting or fun facts about rugs or carpets that we’ve missed? Share them here in the comments section below!