Ahoy sailor! Feeling the sun on your face, the wind in your hair, enjoying yourselves on the water… What’s not to like about sailing! It’s a very popular sport, and it has had a large influence on modern life.

Are you interested in sailing, cruising, competitive racing, or charter vacations? Worry not! There is a sailboat that’s perfect for you and a lifetime of sailing adventures awaits! Why is it a lifestyle many dream of?

Let’s feel the breeze in the air and sail along with these 18 fun facts about sailing and search out the answer!

1. Semaphore has an interesting history.

During the Anglo-Dutch wars from 1652 to 1674 the Dutch admiral De Ruyter and Grand Pensionary DeWitt came up with a successful flag signalling system that is used to this day for communication with ships and the transmission of messages that sailors can easily understand.

2. The most successful pirate of all time was female.

Ching Shih (which means ‘widow of Zheng’) was the mightiest pirate that ever lived. Her ships were operated by 20,000 – 40,000 men, women, and children. She fought major naval powers, such as the British Empire, the Portuguese, and the Qing dynasty.

In 1898 Joshua Slocum, a Nova-Scotia-born American became the first man to sail around the world by himself. He also wrote a book about his journey named “Sailing alone around the world” which became an international best-seller.

The second attempt was made 69 years later. So it took some time for the world to catch up, with Sir Francis Chichester completing his trip in 1967. 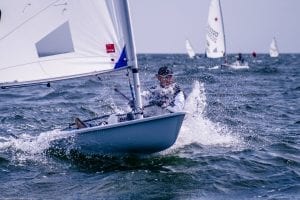 4. Some sailors really go all out!

Just two years later, Sir Robin Knox-Johnston became the first person to sail non-stop and single-handedly around the world. He wrote a best-selling book about his adventure: “A World of My Own”. The first ever non-stop solo round the world voyage.

5. Sailors are getting younger.

Jessica Watson from Australia and Laura Dekker from the Netherlands, both 16 after their voyages, each sailed a boat singlehandedly around the globe.

Another 16-year-old, Abby Sunderland of California, attempted a singlehanded circumnavigation in 2010 but had to be rescued after rough weather in the Indian Ocean.

6. However, it’s not all plain sailing.

The Guinness Book of World Records and The World Sailing Speed Record Council have decided not to recognise attempts for youngest circumnavigator in the future, to discourage kids from making such dangerous record attempts.

Sailing can give you access to off-limits tourists’ attractions. From exotic species and authentic villages to peaceful beaches and rich nature. Places like these can feel like a personal heaven for anyone fortunate enough to visit them.

Luckily, as a sailor, you have the opportunities to visit these hidden pearls.

8. Sailing has changed our vernacular.

Many terms and sayings we use every day originate from sailing. This applies to the term “feeling blue” which means that you feel sad or depressed. The saying originated from sailing, because in the past when a ship lost its captain during a voyage, the sailors would sail blue flags, indicating their loss. So if you’re feeling blue, you’re referring to the blue flags that were used to sign that the ship’s crew is in mourning.

9. So have far-flung sailing spots!

Doldrums is the name of an area of the ocean on either side of the equator. This area is known to have unstable and light wind conditions. A sailing ship caught in the Doldrums can be stranded due to lack of wind. Today the term is used to describe someone as being in low spirits, stagnated or depressed. 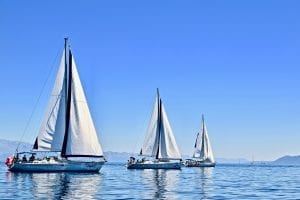 The easiest wind to maneuver small and mid-sized boats is between 8-12 knots, while still being able to reach good speeds. Anything between 5-8 knots is ideal for beginners learning to sail.

You can sail in a straight line for nearly 22,229 miles…in a theory by cartographer David Cooke. Critics consider it’s impossible to navigate in a perfectly straight line, but it’s still a cool theory! According to him the Cooke Passage running around the Earth from Port Renfrew to Quebec is a sailing route you can take and finish without ever touching land.

12. Some yachts are MASSIVE.

With a length of 88m, The Maltese Falcon is the biggest sailing yacht in the world. With two 1,800 horsepower Deutz engines, it is deemed to be the most expensive sailboat in the world. It has its gym, an atrium, a VIP cabin, four guest suites with king or queen beds, and plasma screens. It 2009 it was sold for a whopping price of £60 million. 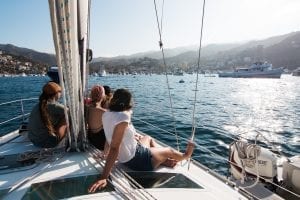 13. Some boats, meanwhile, are seriously built for speed.

In November 2012, the Australian Paul Larsen set the fastest sailing speed of 65.45 knots or over 120 kilometers per hour with the specially-designed Sail rocket 2. He managed to set this record in breezy conditions in the waters of Namibia.

Can you operate a 100-foot sailboat by yourself? World-record holder François Gabart operated the 100-foot Trimaran MACIF by himself. However, it’s not easy and you have to be experienced and mentally tough.

15. Sailing is an modern Olympic mainstay.

Sailing has been a part of the Olympics since 1896.

According to Ben Ainslie’s official website, he is the most successful Olympic sailor of all time. 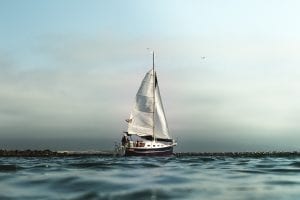 16. There are a few challengers to the ‘best sailor of all time’ crown.

Alessandro Di Benedetto, who is also called the Crazy Italian, has a special world record on his name. He circumnavigated the world in the smallest sailboat: a 21′ (6.5 m). It took him 268 days and 19 hours, which is not very fast.

Most word-record contenders choose to sail eastward, thanks to the stronger and more predictable winds and currents on the southern hemisphere. Just 5 world records are using the westward route, and since 2010 no one set a record by taking a right turn.

18. It’s getting easier to learn how to sail.

Learning to sail may seem complicated or beyond reach for many but you can learn the basics in many local organizations (yacht clubs, community parks, and private schools) that offer affordable courses to those who want to experience life under sail. 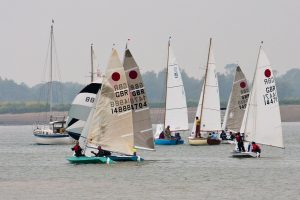 How dangerous is sailing?

Sailing can be very dangerous if you attempt it without any kind of training - it’s said to be more dangerous than skiing, for example.

How many types of sailing boat are there?

There are generally five or six main sailing boat types that differ depending on your mast - sloop and catboat, for example.

Sailing remains popular all over the world, with around four million people in the US sailing at least once a year alone.

Do you know any fun facts about sailing?  Share them in the comments below!

Are you fascinated with sailing the high seas? Then you might enjoy these interesting facts about the RNLI…