Did you know we first started talking about scorpions in the Bible? These truly ancient creatures have been around for longer than many people might think. What’s more, they are fascinating from their biology to their behavior. Here are some fun facts about scorpions to inspire you!

1. Where do scorpions normally hang out?

Scorpions live mostly in deserts. They have also been found in different environments including in some mountainous areas where they seek protection and food in crevasses amongst rocks. They can survive freezing temperatures as easily as extreme desert heat.

Scorpions prefer to eat live food so in captivity, owners can buy live crickets for their scorpion pets. They also eat insects, spiders and if food is particularly scarce, other scorpions! Starving mothers will eat their babies!

Scorpion Moms usually give birth to between 20 and 45 offspring. Known as nymphs, these small agile babies are fully formed with a curled tail. They usually stay with Mom for security until fully independent. 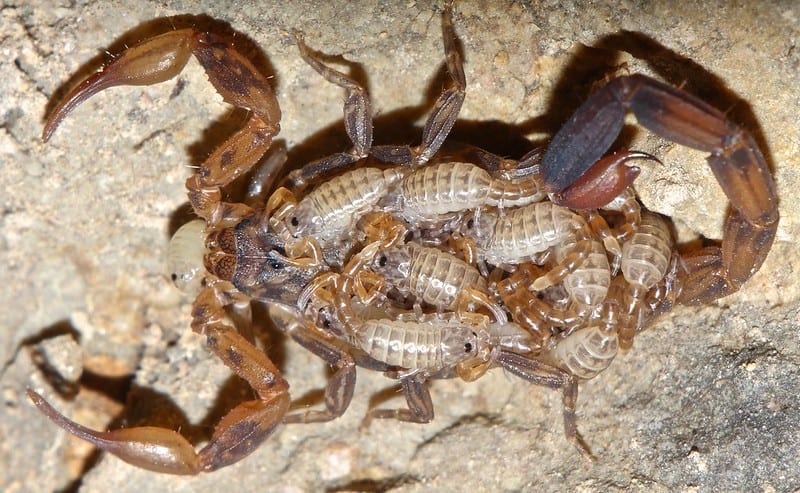 Scorpion Mom with her babies

Scorpions can’t swim but may survive for up to 6 days in water. They can hold their breath for a long time. Whilst not willingly being submerged, they do cope with crossing streams by walking along the bottom.

5. Scorpion is a common delicacy.

The sale of scorpion venom is lucrative! It sells for up to 8,000 dollars per gram! It’s projected to be increasingly used for medicinal purposes.

They are relatively easy to keep. They will need a moist environment and indirect misting of their habitat is recommended. Their poop is very dry and powdery, so easy to clean.

In the wild scorpions live for between 2 and 6 years though some have been known to live for 15 years. In captivity their lifespan is often significantly shorter. Much depends on the adequacy of their home, stress and food supply.

9. They are truly ancient beasts!

Scorpions are known to have existed during the Silurian period approximately 437 million years ago! This means they pre date dinosaurs! 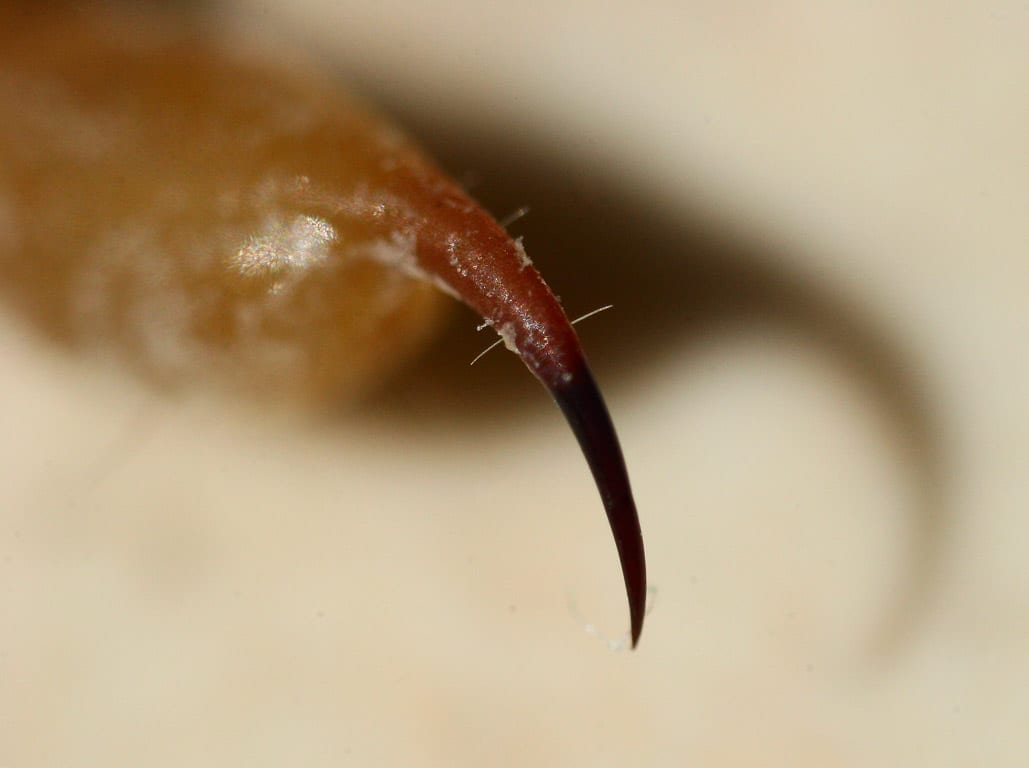 Close up of a scorpion stinger

10. Scorpions aren’t to be tangled with.

All Scorpions are dangerous to some degree. They use venom to kill or disarm other creatures. Alternatively, they attack prey with pincer-like claws. They can be repelled by the scent of cedar, cinnamon, lavender and peppermint.

11. Some scorpions are life-threatening.

Only 25 of the approximate 2,000 species of scorpion pose a potentially lethal threat to humans! These include the Arizona Bark Scorpion and Yellow Scorpion, both of which are found in the USA. The Black Tail Scorpion of Southern Africa is capable of killing humans too!

Yes, believe it or not, under UV light, it’s likely that you will be able to see a scorpion glow. This is an evolutionary oddity, however, as we’re not entirely sure why they do it. 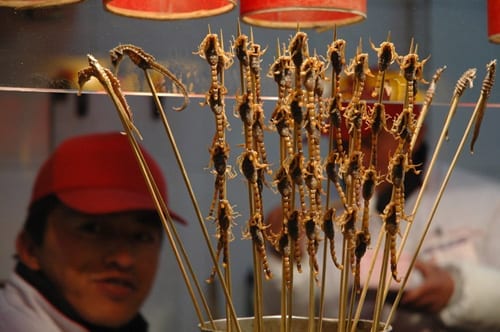 While there is a lot of bad press regarding scorpion venom, it can actually be helpful in the development of cancer treatments. What’s more, some researchers have found that scorpion venom can prevent fungal and bacterial growth in some cases – and studies are ongoing with regard to venom being used to treat arthritis!

Are scorpions known for killing their mates?

Yes - rather grimly, and in a similar vein to praying mantis mating, some female scorpions are known for killing the males after courtship. Not only that, as many scorpions are also cannibalistic, they can even eat each other after intercourse!

Would a scorpion triumph over a tarantula in a fight?

Should a scorpion ever come across a tarantula, it’s likely to be on the back foot. Tarantulas are generally bigger, on the whole - despite the fact their bodies appear weaker, a big enough spider would have the upper hand in this brawl.

Can scorpions climb walls and ceilings?

In some areas of the globe, many people struggle with scorpions ‘letting themselves in’ - and yes, they can crawl up the walls and ceilings. Sleep tight!

Do you know any fun facts about scorpions? Share them in the comments below!

This page was last modified on November 28, 2021. Suggest an edit