Seahorses have fascinated people for a very long time – they’re thoughts to have been drifting around the deep for almost 25 million years! Though fish, their heads resemble horses, and whilst they have no legs, they have strong fins which move fast to enable them to move and steer.

You’ve probably seen a seahorse or two in your time – and let’s face it, they leave quite a lasting impression. Could this be the strangest sea creature on the planet? It’s certainly one of the oddest we’ve laid eyes on so far.

Let’s get to know them in a bit more detail with these fun facts about seahorses.

1. Seahorses were easy to name.

The name ‘seahorse’ actually comes from the Greek word ’hippocampus’, which means ‘horse sea monster’! Their heads resemble those of horses on land – hence the name!

Seahorses appear to have ears, too – but look a little closer! They are actually fins.

3. That fact about male seahorses is absolutely true.

Yes, seahorse males become pregnant! Following courtship, the females deposit unfertilized eggs into the males. They’re thought to be the only animal males that give birth to young. 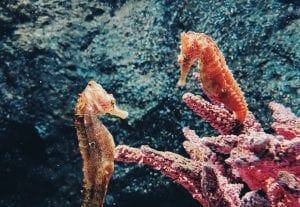 During courtship, seahorses link their tails and in a dance like motion, twirl and sway!

5. Male seahorses do a lot for their kids!

Males can support between 5 and 1500 offspring in their pouch at any one time! With a membrane similar to a human placenta, fertilized eggs develop into fully functioning seahorses before they leave the safety of their father’s pouch.

6. Seahorses are fantastic at protecting themselves.

Seahorses are known to camouflage themselves by changing color! This allows them to blend into the area in which they thrive.

Seahorses can camouflage themselves so they can get up close and personal to their prey – which is largely plankton.

8. Seahorses have a few predators to worry about.

Seahorses have two main predators – humans and crabs! Crabs are one of the few marine animals capable of cracking the hard crusty shells of seahorses. They use their strong pincers to split the body of their meal – one seahorse at a time.

9. However, they are generally safe in the water.

Seahorses aren’t such a big pick for other sea critters in terms of prey as they are very brittle! Crabs have the technology to crack into them, however. 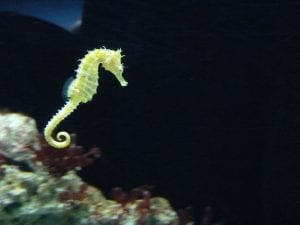 10. Yes, seahorses are hunted by humans.

Believe it or not, many seahorses are hunted for medicinal purposes – there is a boom in dried seahorse in China, for example. It’s thought that 40 million seahorses are fished each year!

Cirri are growths found on the outside of some seahorses’ bodies. Varying in length, they can help them change color and also act as physical protection. There are some seahorses that can grow cirri up to 2cm in length – while some can’t grow it at all!

It’s thought that seahorses with long cirri are particularly rare – and are therefore keenly hunted by collectors. 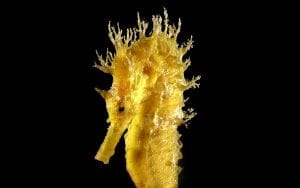 Weirdly enough, seahorses often choose to swim as a duo, with their tails linked as they go.

Another thing you’ve likely noticed about seahorses is that they swim upright – yet another reason why they are some of the strangest critters floating about in the deep! 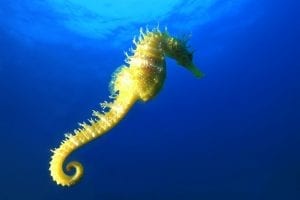 Should you touch a seahorse?

No, you should never attempt to touch a seahorse. The reason is, they can be extremely brittle and therefore very sensitive! Even a slight brush could cause them genuine harm, so try and keep away.

What’s the biggest seahorse on the planet?

The biggest known species of seahorse is the big-bellied variant, otherwise known as the Hippocampus abdominal. It’s known to grow to more than a foot in length!

Is it legal to keep a seahorse as a pet?

No - it’s generally illegal to keep animals such as seahorses as pets, particularly in Australia, where they have rules in place to protect those creatures they call syngnathiformes.

What do seahorses eat?

Seahorses eat plankton and other microscopic organisms that float past them. Having no teeth, their food has to be sucked in and swallowed whole!

Do you know any fun facts about seahorses? Share them in the comments below!