When you think of Siberia, you likely imagine the very coldest reaches of Russia – and there are plenty of reasons for this! However, there is more to Siberia than sub zero temperatures. Did you know just how large Siberia is, for example? Do you know how chilly it can actually get in the area on average?

It’s time to dive into another fact file – and this time around, we’re going to be focusing on the Siberian freeze. Whether or not you’re planning to set up a woolly parka and move into the great white east any time soon, here are a few fun facts about Siberia you might not be aware of.

1. Siberia is probably bigger than you think.

Siberia is truly massive. In fact, even on paper, it’s hard to understand just how colossal the region actually is! It measures around 13.1 million square km. To put that into perspective, that’s more than three quarters of the whole of Russia – and almost 9% of all of earth’s land mass. However, it is extremely sparse.

2. The railway is amazing.

The area is also well known for its connectivity via the Trans-Siberian Railway. This colossal railway network covers up to 9,288 km in length and takes an entire week for you to travel from end to end. That’s only counting a 20 minute stop at each station – and it’ll take you all the way from Moscow to Vladivostok. It’s an incredible journey for peering out at the natural beauty of the Siberian forests.

In fact, measuring time on board the Trans-Siberian is somewhat difficult. That’s because, unlike your average trip on the London Underground, the trains here will normally travel across eight different time zones! It’s perhaps the closest we have to a working time machine in motion! 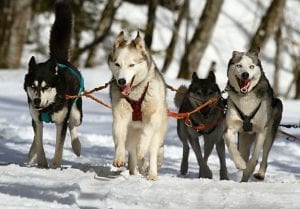 4. Siberian Huskies are, funnily enough, from the area.

The Siberian husky is, of course, named after the region, which is as a result of the breed being popularly used to pull sleds across the north of Russia. These dogs are very popular for breeding in the region.

Believe it or not, Siberia is not always bitterly cold throughout the year. It’s best known for its intensely cold winters, but you will actually find that some parts of Siberia experience summers that reach up to 35 degrees C in temperature!

6. Siberia is home to… swampland?

Believe it or not, Siberia is actually host to the biggest swamp system in the north of the planet. It’s around 550km wide one way, and 270km wide in the other direction. The name of the system is the Great Vasyugan Swamp and is truly unique – there are no stretches of swamp this large elsewhere on the planet, and it’s a geographical oddity in that a swamp should ever reach this size.

7. Permafrost is a problem.

While Siberia isn’t always freezing cold, it does suffer from permafrost. This means that the land itself never fully thaws out. This actually applies to more than 60% of total land in Russia. As we’ve discovered, that’s understandable – as most of Russia actually IS Siberia!

8. Mining for diamonds – deep in the heart of Russian wilderness!

Siberia even has its own diamond mine! However, it’s illegal to fly a helicopter over the top of it – as there have been numerous occasions of helicopters losing control and falling into the mine’s vacuum.

9. Some of the biggest flakes on Earth fall here.

Siberia is often home to some of the biggest snowflakes in the world, as you might imagine. For example, there have been snowflakes measuring as large as 12 inches in diameter in the region.

What’s more, Siberia is known to experience its own type of frosty dusting – made up of icicles – better watch out below! 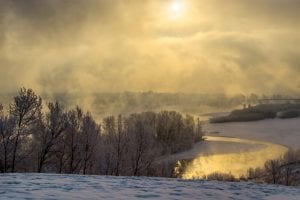 Not one to be outdone in terms of anything to do with size, Siberia is also home to four of the world’s ten biggest rivers. Specifically, these are Amur, Ob, Yenisei, and Lena.

11. You could fit Holland inside one of Siberia’s lakes.

Believe it or not, there is a lake in Siberia which is equivalent to the entire size and land area of the Netherlands. Specifically, we refer to Lake Baikal, which also happens to be the deepest known freshwater lake of its kind on the planet. Siberia is all about setting records, as you can already see!

Siberians were readily sharing tea as currency as recently as the 1930s. 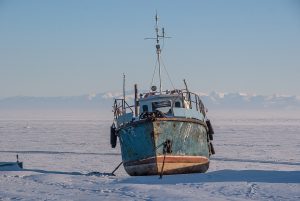 What are some of the countries in Siberia?

Siberia crosses many borders, including into Kazakhstan, Mongolia and across the Ural Mountains.

Are Siberia and Russia the same?

Technically, yes - Siberia extends into Russia, however, the area also extends across many other countries, too.

Do you know any fun facts about Siberia?  Share them here in the comments below!