Also known as the Mountain Gorilla or the Eastern Lowland Gorilla, the Silverback Gorilla is a form of ape found in African mountain ranges.

The population of Silverbacks are currently on a steady decline, and poachers are playing a major role in this. Here’s some interesting facts about Silverback gorillas that shows what incredible primates they are.

1. Silverback is a male title.

Only the male gorillas can become a silverback. At eight years old, male gorillas are considered mature adults even though they are not fully grown. At around the age of 13, male gorillas become silverbacks. Silverback males typically become the leader of a troop.

2. Silverback gorillas have a varied diet.

Parts of Central and Western Africa near the equator is a portion of the silverback gorilla habitat. Their diet consists of leaves, shoots and fruits. Ants and terminates are also a part of their diet.

Silverback gorillas can weigh more than 200kg and measure up to six feet tall. Their large jaw muscles are utilised for chewing tough vegetation. 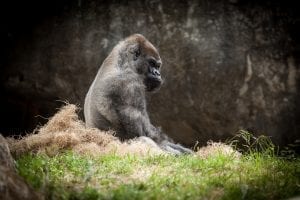 4. You’re very similar to a silverback!

Sharing up to 98% of human DNA, these gorillas are very similar in genetic makeup to us humans. The gestation period for gorillas is nine months, just like humans.

5. Never get a silverback angry.

These gorillas can become aggressive towards one another, even though they tend to be calm and quiet animals. Males in particular scream and beat their chest in shows of power.

New-borns are kept very close and looked after by the mother for the first few months.
Silverback gorillas are widely known for being intelligent animals due to their means of communication (through vocalisations), facial expressions, body language and gestures.

7. They even take plenty of time out.

These gorillas spend mornings and evenings searching for food actively, while they reserve their midday for resting and playing.

8. Silverbacks live for a long time – compared to other animals!

Gorillas can live from between 40 and 50 years. They have been observed to live slightly longer in captivity.

9. In a fight, a silverback will certainly beat you! 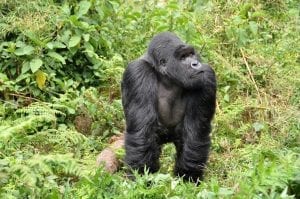 10. However, they are growing endangered.

There are currently less than a thousand silverback gorillas left in the world.

Silverback gorillas spend most of their time on the ground as they are too heavy to climb trees. The younger gorillas, who weigh a lot less, are the ones who tend to climb more frequently on short sturdy trees.

$2.7 million can be generated by just a single silverback gorilla through tourism.
Governments of Rwanda, Democratic Republic of Congo and Uganda go to great lengths in order to protect these primates. 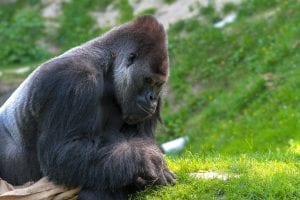 In some cases, yes, silverback gorillas can be dangerous, though normally to one another. If you frighten or threaten a gorilla, you had better run - give them some respect!

Why are they called silverback gorillas?

Funnily enough, it’s a literal name. These gorillas have grey, silvery streaks of hair up their backs.

What are gorillas afraid of?

Believe it or not, some gorillas are afraid of water - much like some people are!

Do you know any fun facts about Silverback Gorillas? Share them in the comments below!

Want to discover more facts about primates? Check out these charming facts about chimpanzees.