Skunks are, of course, pretty distinctive, and its well known that these critters give off a horrendous smell! However, this has become something of a defining trait for the mammal, and we think that’s pretty unfair!

That’s why we’ve put together this fact file – to try and separate Pepe Le Pew from this truly fascinating beast. Of course, we’re going to cover the smell factor – but there’s more to them than just a pungent odour – check out these 11 fun facts about skunks!

1. Skunks are smaller than you think.

Skunks are relatively tiny! They will only ever weigh up to around 14lbs on average and can be as small as eight inches long. Be careful where you tread!

2. They’re not so good with their peepers.

Skunks, as you can imagine, have fantastic senses of smell. They’re surprisingly good at hearing things, too – but they have pretty poor eyesight.

Their top speed is around 10 miles per hour, which doesn’t make them particularly nippy when it comes to outpacing predators such as coyotes and owls. However, that’s where their incredible foul-smelling glands come in handy! 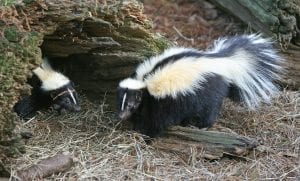 4. They warn you before they spray.

Take a deep breath – skunks will release pungent sprays from their behinds directly at potential predators. You’ll have time to escape this, as they give you a bit of a warning by stamping around and turning tail.

In fact, skunks are pretty gutsy. They will often try to take on an attacker first if they can, though due to their small size, they will often need to rely on their sprays to make a clean break for it.

A skunk will only live for up to four years in the wild on average.

7. They live all across America.

The skunk is native to North America, with at least four different species in the wild spanning Canada all the way down to Mexico.

8. They’re daring in their predatory pursuits!

Skunks love to eat beetles, grubs and even birds’ eggs. However, they have even been known to attack beehives and nests – as they find honeybees particularly tasty.

However, the skunk is surprisingly hardy. If you think they’d be bothered about bee stings, think again. What’s more, research shows that they can bounce back easily from snake bites!

In fact, this general immunity against snake poison and venom means that they are common predators for all kinds of slimy slitherers. That, believe it or not, includes rattlesnakes. Got a rattler problem? Send out a skunk! 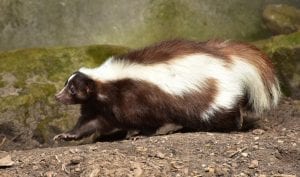 9. They won’t hang around together much.

Skunks tend to be fairly solitary. However, as you can imagine, they tend to group together when it comes to mating seasons. The average skunk litter could bear up to seven young at a time. However, it’s not unheard of for there to only be one skunk born at a time.

Skunk odors aren’t harmful, though they can spread a variety of diseases to humans and other animals. Therefore, if you are concerned that you have a skunk bite, make sure to speak to a medical professional as soon as possible.

Skunk odors, while non-fatal, will linger for days. And no, it’s not a misnomer or myth that they stink – they really, really smell very foul indeed. 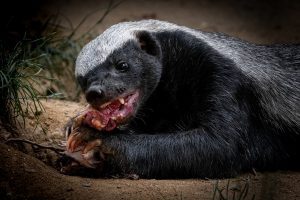 Why do I get skunks in my yard?

Skunks are much like raccoons in that they are attracted by rotting food and garbage, so be sure to bag up.

Will a skunk give chase?

While skunks are pretty plucky, they will likely never chase humans. Instead, it’ll be you running away from their awful smell!

They can be - and some people even keep them as pets. However, as they can spread fatal diseases, it’s not always recommended to domesticate them.

What do skunks eat?

Do you know any fun facts about skunks? Share them in the comments below!