Squids are seriously odd sea creatures – and they come in all shapes, sizes, and colors! There may be a lot about the humble squid you don’t already know. These aquatic beasts deserve our respect – so here are some fun facts about squids you might want to remember the next time you take to the pub quiz!

1. What are squids related to?

Squids belong to the group known as Cephalopods. They are related to and share similarities with Octopus and Cuttlefish.

They are invertebrates which therefore means they have no bones, nor do they have a spinal cord.

3. They’re pretty curious to look at!

The squid has eight arms, two tentacles, and bulbous heads. Squid has some pretty exciting features, possessing two eyes, which can be the size of frisbees! 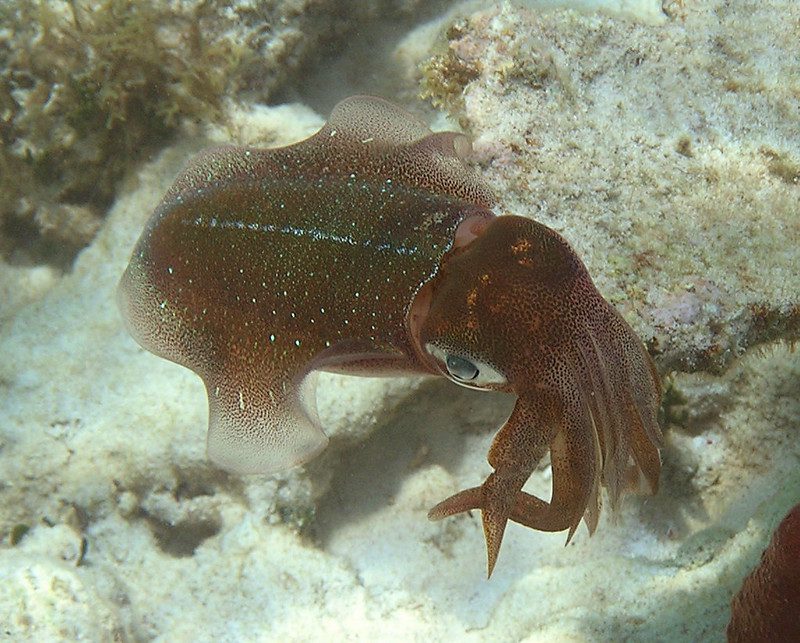 One of their eyes is on the top of their head, facing upwards, to view the activity above. Their other, smaller eye is beneath to scour the depths and sea bed.

5. They are the chameleons of the sea.

Squids have the fantastic ability to change color! The cells known as chromatophores allow them to do this. Some octopuses have the same cells and ability.

As surprising as it sounds, squids have three hearts. Two hearts pump blood taken up by gills, and the third pumps blood around the rest of their body.

7. A squid will readily defend itself.

Squid has several self-defense mechanisms. The most obvious and dramatic is their ink attack. This strikes fear into potential predators and interrupts their view!

Squid take in and expel water as a form of propulsion to move their streamlined bodies. It is practical, fast, and energy-efficient!

9. There are perhaps more types of squid than you realize.

There are multiple squid species, and currently, approximately 500 are recognized.

Amongst the most dramatic in appearance is the Red Devil Squid. Found by fishers in Mexican waters, this colorful squid is at its most visually striking when stressed! 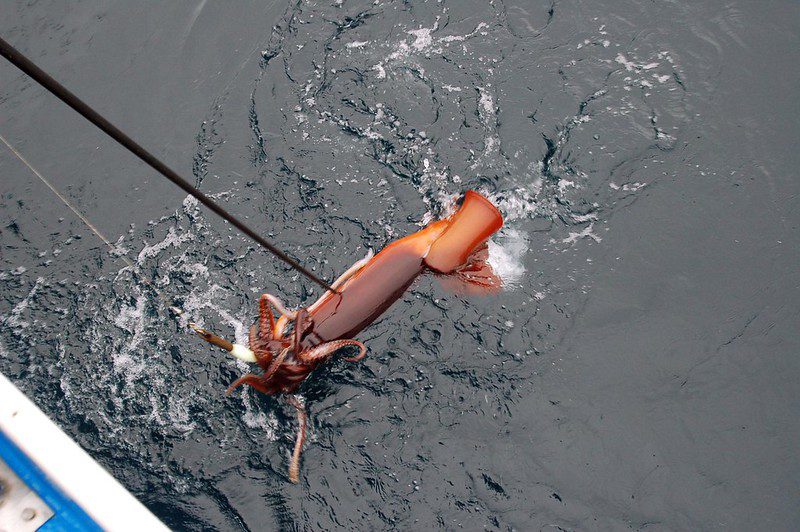 We don’t know if there’s a royal hierarchy in the squid population, but their blood is blue! It is so colored due to its high copper content.

Amazingly, squid have the power to ‘light up’! They are bioluminescent – it’s truly amazing to see them happen in person!

Generally, it seems squid are mild-mannered and live contentedly in groups. They have a form of communication displayed in group activities. They usually feed in groups, too. 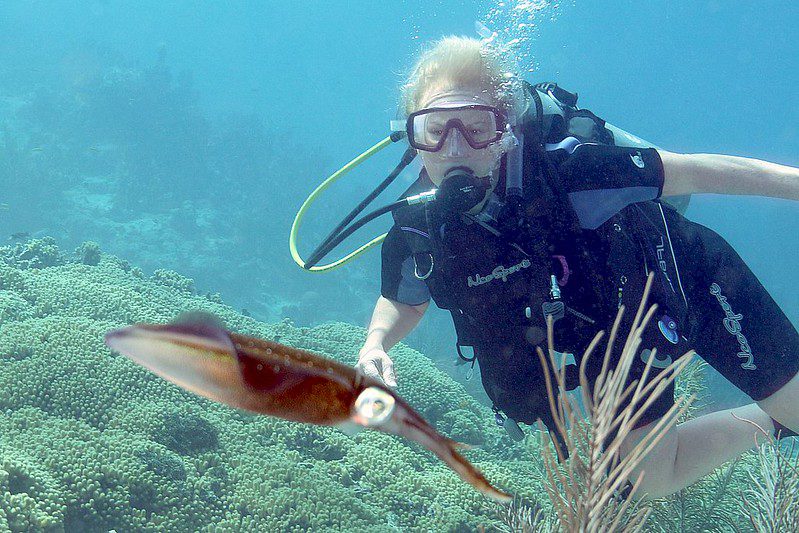 13. Could you train a squid to fetch?

Research suggests that they have the same level of intelligence as dogs.

14. They have their grouping names.

Groups of squid are known as ‘shoals.’

15. Squid beaks are pretty curious on their own.

Chitin is the name of the material forming the beak of squid. It is attached to muscle tissue. 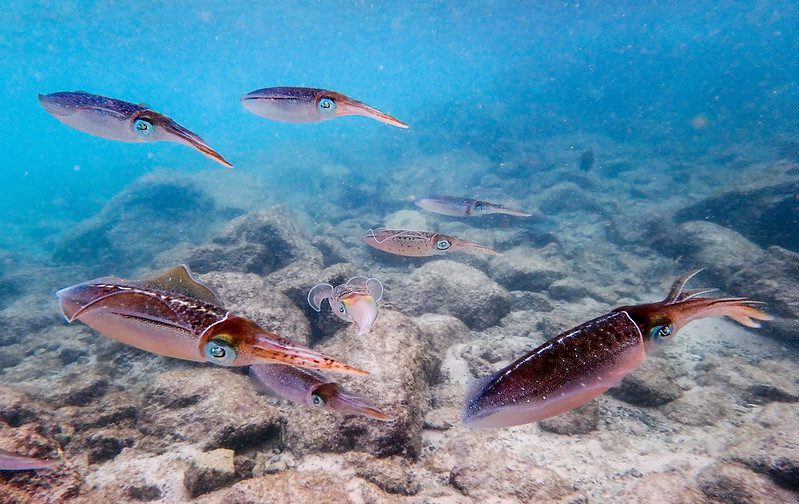 16. Squid pain receptors are out in force.

Researchers over at the University of British Columbia have discovered that squids perhaps feel pain more than most creatures. Squid has 500 million neurons. Rats have ‘only’ 200 million!

17. Their poop’s evolved for a reason.

Squid poop is notoriously solid and rigid! This is believed to prevent it from being sucked up by the gills.

18. There’s no average size of squid!

They range in size from one inch to several meters in length.

It’s not unheard of for squid to occasionally venture onto land, though it is scarce! 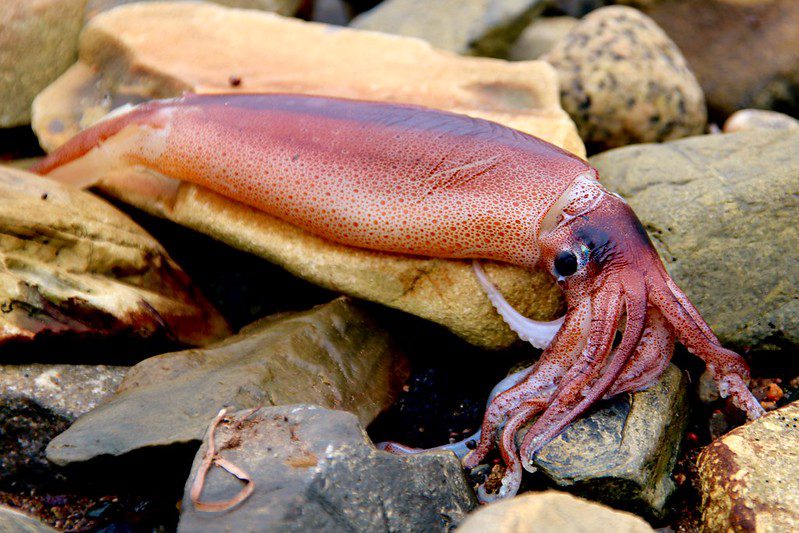 Is a squid a popular food for humans?

Yes - squid is on the menu in many countries. Usually displayed skinned, it appears to be a very bright white. As their nerve cells die off, their color changes, but stripping them is thought to make them look more appetizing.

What is unique about how squid swim?

Squid can swim backward - they’re the hummingbirds of the deep!

Can squids be kept in aquariums?

Squid, particularly very small ones, can be kept in aquariums but are tricky to care for. Highly sensitive to toxins in the water, other inhabitants can also eat them.

Do you know any fun facts about squids? Share them in the comments below!

This page was last modified on January 28, 2022. Suggest an edit