Who doesn’t love squirrels? These bushy-tailed, bright-eyed tree climbers are loved all over the world – and they come in many different varieties! However, there’s likely more to the humble squirrel than you might imagine.

Here are some fun facts about squirrels you’ll want to remember the next time you see them scurrying across your garden.

1. The squirrel palette is broad and colorful.

Squirrels show up in a variety of colors including tan, chestnut brown, red, grey, and black.

They can be found on every continent apart from Antarctica and Australia – the former because it’s far too cold, and the latter because – well – they can’t swim that far!

Squirrels are omnivores. They are not picky eaters and will eat what is readily available. They are especially partial to seeds and nuts! 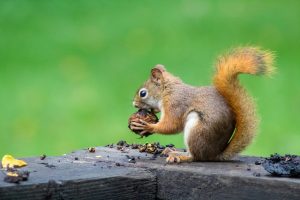 4. Squirrels can bond with humans if they trust them enough.

It has been known for squirrels to form a bond with humans, especially when food is involved! Squirrels have become confident to approach humans and revisit gardens or parks to seek out friends they know well.

5. Squirrel habitats can and will vary.

Squirrels generally live in trees, though they are also known to sometimes burrow. They sometimes hibernate in burrows, too. They also seek out small animals to eat whilst on the ground!

6. We rely on squirrels for their green boosting powers.

Historically, squirrels have helped regenerate forests and woodlands. As their natural habitat is reduced for commercial reasons, more are compelled to settle in towns and cities – they’re becoming urbanized.

7. What can you expect from squirrel breeding?

Squirrels can breed several times per year. Squirrel Moms usually have one or two litters per year, and births see the arrival of usually 2 to 4 babies at each time.

8. What do squirrels and cats have in common?

9. They’re not afraid to put up a fight or two.

It has been known for squirrels to fight to the death – they can be extremely territorial. 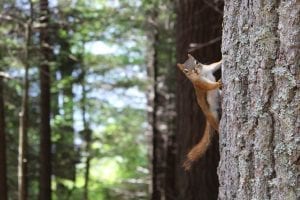 Squirrels are known to have sweet teeth! They love bananas and other sweet fruits and berries.

11. How long do squirrels live?

Depending on the species, smaller ones can live for up to between 6 to 10 years. Larger species can live between 15 and 18 years, however.

12. They can be lightning quick!

Some squirrels move very swiftly! Eastern Grey squirrels can reach speeds of around 32 kilometers per hour – blink and you’ll miss them. 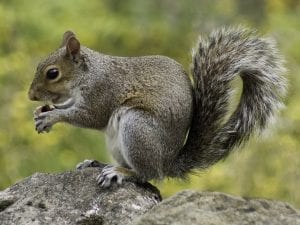 13. Can the flying squirrel actually fly?

People have been gripped in speculation about this little creature’s flying ability for decades! Flying squirrels don’t actually fly, they glide! Soaring for up to an impressive 150 feet, they look spectacular when airborne. They seem to use their tails as brakes to slow down on the approach to land, too.

14. What exactly are squirrels, anyway?

Squirrels are rodents. They are of the order known as ‘Rodentia’.

Squirrels are generally very shy – they like nothing better than to camouflage themselves and to go unspotted. However, as mentioned above, if you have sweet treats or nuts, and are kind and patient with a squirrel, you will have a friend for life. 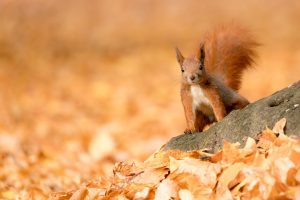 Are squirrels bad for the environment?

Not at all! Squirrels can get a bad reputation as they have a habit of stealing food you leave out for birds on tables or in feeders. However, their propagation can actually help to inspire greenery, and they generally won’t cause a nuisance in the wild.

No - not generally. Squirrels are fine and safe to look after in your back garden occasionally, but they are wild animals - and are not to be domesticated.

Do squirrels ever eat mice?

Yes - though they will normally only munch on other rodents if desperate. They’ll much prefer to scavenge for nuts and berries - it’s easier, on the whole!

What is a group of squirrels called?

The collective noun for a group of squirrels is a dray or a scurry.

Do you know any fun facts about squirrels? Share them in the comments below!