The islands of Saint Pierre and Miquelon are located in North America, and are in fact the last remaining French territories in the whole of the continent! This pair of islands is well-known for having its own time zone, and for its part during prohibition smuggling in the 1920s! Beyond this, let’s take a look at some fun facts about Saint Pierre and Miquelon to clue you in on what else to expect.

1. Saint Pierre and Miquelon have been fought over many times.

The English and French fought over these islands for over a century! In the years 1713, 1778, 1794, 1803 and 1815, the English seized control of both territories. Between those years, the French seized ownership back – and in fact, they’ve remained in control since 1816.

2. There are multiple islands up here!

Saint Pierre is both the name of one of the eight islands covered by the joint territory, and the name of the capital city. Only two of the islands are inhabited – Miquelon, funnily enough, is the other!

3. The time really does fly!

Saint Pierre and Miquelon have their own 30 minute time zone! They’re 30 minutes ahead of Newfoundland. This means that New Year celebrations begin half an hour earlier than in the rest of North America up in these islands. Crucially, for travelers, it also means that those heading west from Fortune to Saint Pierre are required to adjust their watches ahead! 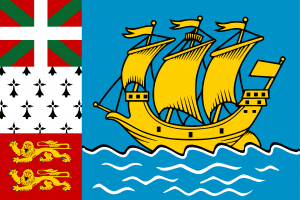 Flag of St Pierre and Miquelon

4. What do people spend in Saint Pierre and Miquelon?

The Euro is the prevailing currency of the area thanks to its ongoing French connection. Canadian dollars are also accepted.

5. What do people speak in Saint Pierre and Miquelon?

The predominant language of the islands is French. English is also commonly spoken here, but food and wines are mostly influenced by French taste.

Christianity is the main religion worshipped across Saint Pierre and Miquelon, of a mostly Roman Catholic population.

The islands are situated in the Gulf of Saint Lawrence, at the entrance of Fortune Bay. People rely on ferries to get them to and from the settlements!

Brest in France is the closest French city to the islands. However, it is a lengthy distance of 2,373 miles away (3,819 kilometers)! It’s one of France’s furthest-flung territories.

During the 19th century, around 600 shipwrecks were recorded between Langland and Saint Pierre. This led the area to take on the rather unpleasant nickname of ‘The Mouth of Hell’! Thankfully, its reputation has changed a lot in the decades since! 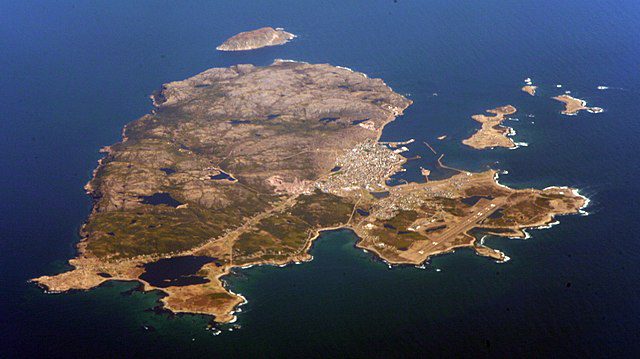 During the 1920s – and during the famous era of prohibition in the US – the islands became a base for smuggling alcohol. Infamous gangster Al Capone frequented the area, staying at a hotel which is still open for business! Hotel Robert has attracted historians, film makers, tourists and businesspeople for decades!

In 1931, the New York Times reported that 6,871,550 liters (1,511,529 imperial gallons, equating to 1,815,271 US gallons) of whisky were imported into Saint Pierre and Miquelon via Canada in a whole year! Smuggling then largely took place through inland US until prohibition ended a few years later.

11. Fishing’s no longer so viable.

The economy of the islands is influenced by increasing regulations and decreasing numbers of fish – fishing was once the main trade of the region. Today, exploration for gas and oil, tourism, and public services are the main sources of employment and funding in Saint Pierre and Miquelon.

Saint Pierre Airport began operations in 1999 and supports long-haul flights for people and cargo alike – you can get here from many operators on the US mainland!

A major annual attraction of the area is whale watching in spring. Migrating whales are studied and filmed by nature lovers and scientists. Their activities are good indicators of both the health of the species and condition of the waters, too! 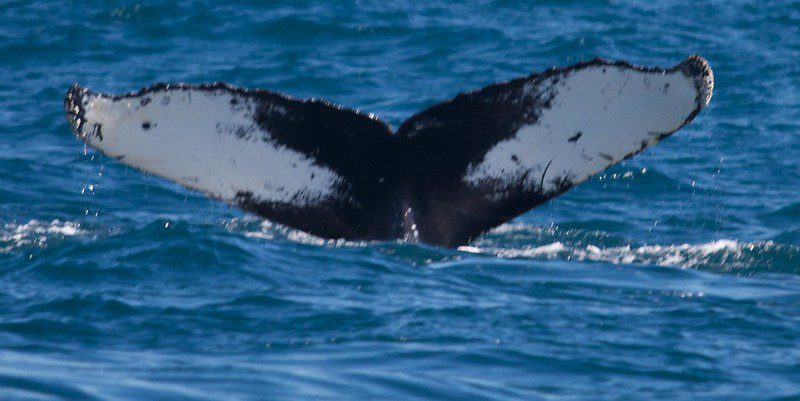 FAQs about Saint Pierre and Miquelon

Why is Saint Pierre and Miquelon still ruled by the French?

In 1958, the residents of Saint Pierre and Miquelon voted to remain a French territory - they had the choice of continuing as a self-governing state but preferred to stick with France!

What’s the weather like in Saint Pierre and Miquelon?

Unsurprisingly the climate is influenced by chilly polar winds and warm gulf stream water.
There are relatively mild winters with temperatures averaging 36 degrees F. August and September are the warmest months, and it rains for an average of 146 days a year.

Do you know any fun facts about Saint Pierre and Miquelon? Share them in the comments below!

🌎 8 Stunning Facts about the Seven Wonders of the World