Swans are majestic and iconic – they really are a firm part of the British countryside! Of course, as with all wild birds, it is never a good idea to try and approach a swan on your own – they can get pretty vicious and protective!

These fun facts about swans are going to break things down on these wonderful water avians so you can come away completely clued-up.

Swans aren’t just found in the UK. In fact, you are likely to see them on both sides of the equator! That’s because you’ll find all kinds of different swans to the north and the south. Southern swans aren’t like those you find in our ponds and lakes, as they can vary from white to black.

2. Swans love munching down on greens!

Swans are out and out herbivores, which means that they largely feast on plant life and vegetation which grows on and under the water. As they mainly live in large bodies of water as well as wetlands, this makes perfect sense.

However, it’s not unheard of for a swan to pick at a bug or two, as well as tadpoles. Therefore, they have a pretty varied diet that thrives in the water!

3. They’re commonly found across the US.

You’ll actually find plenty of swans in North America – meaning that across Canada and the US, you are just as likely to see these majestic creatures as you would in the UK. 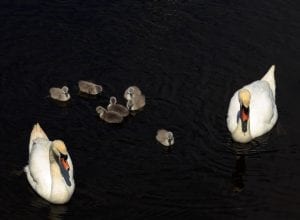 4. Swans sleep in most places.

5. They are fantastically feathered!

Swans are known for their incredible plumages and have rows and rows of wonderful feathers! In fact, the average swan is thought to have around 25,000 feathers in total, but honestly – who is going around counting them all?

Swans are thought to split up when they don’t get on – much like a human divorce! On the whole, these birds of a feather do still flock together, with only around 6% of all swans choosing to split up.

Cygnets, or baby swans, only stay with their parents – their mothers in particular for around six months. At that point, they are literally expected to fly the nest. Kind of puts people to shame, really!

8. The colors don’t make much difference.

You might think that black and white swans are different through and through, however, this really isn’t the case. They tend to have the same attitudes and the same diets; it is literally just their markings which are different.

Swans don’t tend to stay up in the air for too long, but they have an odd reputation for being purely aquatic birds. Yes – they can certainly fly – but it will take them a while to get into the air, particularly as they need a good run up of around 30 yards! Better make way! 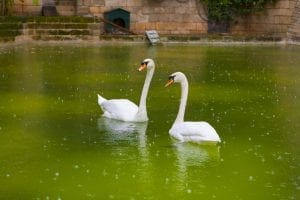 Plenty of people are afraid of swans and geese and for good reason – they can inflict a lot of damage and are not always the friendliest of beasts. This fear is to such an extent that there is an out and out phobia of the creatures, known as cygnophobia.

Swans tend to get off pretty lightly as far as being anyone’s prey is concerned. Swans are pretty big and bulky on the whole, with large mammals such as foxes and wolves being the main predators on the hunt for their eggs.

Sadly, it’s the human being who is the biggest predator of the swan – as we tend to make use of both their feathers and their meat.

12. Does the Queen own all the swans?

The fact about the British Queen owning all the swans in the country has some truth behind it – the fact is, the reigning monarch has ownership rights of mute swans, in particular, who live in open waters across the UK. However, today, this largely only applies to the River Thames and any surrounding waters. Therefore, while you should never try and claim a wild animal as your own, it is highly unlikely that the Queen is going to fight you for ownership. 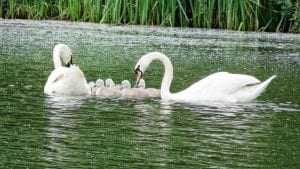 As they’re protected to some extent in the UK, it’s not a good idea if you keep them when living in Britain - but looked after carefully, they can be rewarding creatures.

What do swans symbolize?

Swans are said to symbolize love, beauty and grace!

Swans are infamous for being pretty fearsome! However, they are more likely to attack their own on a territorial facade. That said, a swan can absolutely break your arm with a swift wing - tread carefully!

How long do swans live?

The average lifespan of a swan is 12 years. The do much better in captivity though, when living away from human pollutions, they can average an impressive age of 30 years.

Do you know any fun facts about swans ?  Share them in the comments below!