Swimming is some of the most fun you can have in the water!  What’s more, it’s a great way to exercise.  Humans are naturally able to swim, which means we should all take the chance to go for a dip if we can.  But how much do you know about the act of swimming?  Here are some interesting facts we don’t think you’ll have swum up across before!

You may think that you’re a good swimmer – but are you good enough for the Olympic Games? Statistically, probably not.  Only 2,000 people make it to US swimming trials, for example, and only 50 of those make it to the team.

Swimming at the Olympics has only been open to women since 1912, after it made its debut at the 1896 Games.

It seems that only 45% of American people, according to a study, can actually show any kind of swimming skills. 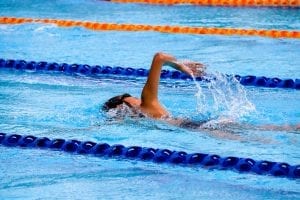 People have been swimming since ancient times. In fact, ancient data shows that we were using the backstroke back when we lived in caves!

5.    Swimming is a real calorie burner.

Swimming is much better at burning calories than most activities. In fact, it’s thought you’ll burn 40% more while swimming than you will while cycling.  That’s a lot of effort!

This is because you’re using most of your body to propel yourself along. You’re using your arms, legs, feet and everything internal – it’s a massive boost to your lungs and your heart, too.

You’re actually using every active muscle in your body to propel yourself through the water – which is incredible if you think about it!

Swimming flippers and fins are fantastic aids. Professional swimmers are able to flex their toes right down to emulate this effect, and to allow for greater streamlining while in the water.

However, did you know that it was Benjamin Franklin who invented the swimming fins?

There’s lots of water for you to swim in. In fact, around 71% of the surface of the Earth is water, meaning there’s no excuse for you to get started!

It’s not uncommon for you to find cruise ships with swimming pools built into them. The first ship to introduce this feature was the Adriatic, launched alongside the Titanic. 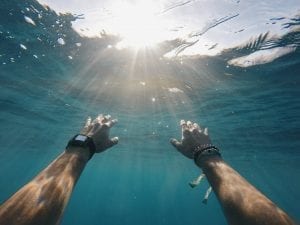 Many swimmers shave before entering the water. This isn’t for streamlining or for comfort, but so that they can notice changes in the water and learn when to use certain techniques.

11. How long can you hold your breath?

It’s possible for you to hold your breath underwater for more than ten minutes, though we wouldn’t recommend it. Only those with plenty of training – including free divers – should attempt it.  Most people can only manage a handful of seconds here and there. 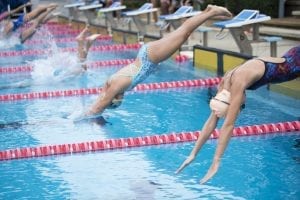 The White House has its own swimming pool, and it was US President Gerald Ford who had it installed in 1975.

Swimming goggles date back further than you think, too. In fact, the first prototypes were made out of tortoise shells!  Who knows if they were actually any help?

Where were the first Olympic swimming contests held?

Why are horses usually such good swimmers?

Usually horses swim instinctively when the water is deep enough for them to float. They are good swimmers because proportionally to their body size - they have very large lungs to help keep them afloat!

Which animals are amongst the worst swimmers?

Camels and giraffes are the wrong shape to be swimmers. The long spindly legs of both species don't perform well in deep water and their body shape does not facilitate swimming.

Do you know any fun facts about swimming?  Share them in the comments below!

Are you fascinated with water sports? Check out these super facts about scuba diving